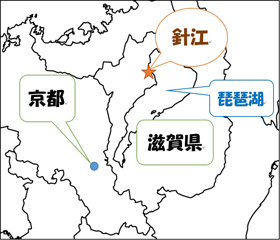 Have you ever heard the word kabata? In the Harie district of Takashima City in Shiga Prefecture, on the western shore of Lake Biwa, underground water flowing from the Hira mountains gushes forth naturally, and for generations local residents have used this spring water for their daily chores. They call it “living water” (shozu). Before the diffusion of tap-water services, they used this spring water for everything from drinking and cooking to doing the washing. The places in houses or in the community where this “living water” bubbled up were called kabata (a kind of well). These kabata were cherished as places where water could be obtained from nature and where people gathered for a chat. After the diffusion of sewerage and tap-water systems, the kabata went out of fashion. But in recent years, with growing awareness of the need for environmental preservation and increased importance placed on water and the harmonious interaction between human settlements and nature (satoyama), this system of utilizing spring water has been attracting much attention. In particular, when NHK produced a program and DVD about Harie’s kabata, titled “Satoyama: Japan’s Secret Watergarden,” in 2004, it drew an enormous response from both Japan and overseas. I myself remember being very moved by that program, and I had wanted to visit the district for some time. Recently my wish was fulfilled, and a representative of the Harie Shozu no Sato Committee kindly showed me around.

END_OF_DOCUMENT_TOKEN_TO_BE_REPLACED

Print  When we think of bullfighting, we immediately picture the scene of a matador in Spain waving a red cape […]

The World of Japanese Tea

The view of Iruma’s tea fields from the observation platform On May 11, 2018, during the period of the f […]

An Interview with Wakaba-san, a Young Geisha in Kisarazu

IHCSA Café interviewed Wakaba-san, a young geisha in Kisarazu who made her parlor debut in September 2016 whil […]

Tower of the Sun: The Symbol of Osaka Expo ‘70

Masamune Swords —Why are they so splendid?—

Tsunahiro Yamamura (Masamune XXIV) Since my younger days, whenever the subject of fine swords has cropped up, […]

HakoBA Hakodate—the Share Hotels has opened its doors in the nostalgic port city of Hakodate, Hokkaido. An 85- […]

From Omiya to the World: Transmitting the Attractions of Bonsai

The Omiya Bonsai Art Museum, Saitama Bonsai Garden (This article was written by Ms. Rumiko Ishida, a curator a […]

Teachings and Romanticism of Ancestors Still Alive in Today’s Hokkaido

Hokkaido welcomes about 7.85 million domestic and international visitors a year (fiscal 2015 figure). In the p […]

A new commercial building called Ginza Place has been constructed at the Ginza 4-chome crossing, which can be […]

Namikoshi Shiatsu was founded by Tokujiro Namikoshi and then spread from Japan to the world by his son Toru. T […]

An Encounter with the Most Delicious Fish in Itoigawa

I fancied some tasty, fresh fish. I was looking for a place with a fish market too, and if that fish market ha […]

Amezaiku—Art Born from the Fingertips

This goldfish looks as if it is about to move. This dynamic-looking creature is actually made of ame, a type o […]

Kochi Prefecture: A Visit to See Pristine Landscape and Culture 2

This time I visited the commercial port city of Onomichi, which still retains the good-old ambience of the S […]

Feeling the Blessings of Volcanoes in Onsen

For foreign tourists, the hot spring resort of Hakone is probably easy to get to thanks to its convenient acce […]

Recently I went along to the Kyoto International Manga Museum (MM), which, apart from a new building, occupies […]

Echigo-jofu is a traditional textile of the Echigo region (present-day Niigata Prefecture), one of the snowies […]

Hot spring lodgings in the snow country are often the stage for literary works. Falling snow makes all kinds o […]

Café Interview “I want to become just like a hot spring itself!” Mayumi Yamazaki, Hot-Spring Essayist

The Hina Matsuri (Doll Festival) is coming up on March 3. Also known as the Momo no Sekku (Peach Festival), […]

A Visit to Tomioka Silk Mill, a World Heritage Candidate, and Its Vicinity

After about an hour’s ride from JR Takasaki Station on the local Joshin Dentetsu Line, which was opened in 189 […]

Following the relocation of Japan’s capital from Kyoto to Tokyo in 1869, the industry of Kyoto, which had serv […]

Hidehira-nuri Mr. Yuya Sasaki Master of Ootiya, a store specializing in the traditional craft of Hidehira-nuri […]

The Warm Hospitality of the Snow Country

Japan’s regions are rich in unique seasonal expressions. In the snow country, this very oment people are […]

A Utopian City Built from a Desire for Peace Oshu Hiraizumi, which once boasted a sparkling prosperity on a pa […]