The Kojiki (Record of Ancient Matters), Japan’s oldest chronicle, was compiled 1,300 years ago in 712. About one-third of the Kojiki is concerned with the world of mythology, beginning with the birth of Japan, and many of the myths involve Shimane Prefecture.
In commemoration of the 1,300th anniversary of the compilation of the Kojiki, the Japan Myth Expo in Shimane will be held in Shimane Prefecture for 114 days from July 21, 2012. IHCSA Café visited the tourist spots of Izumo Grand Shrine and its vicinity, where the main expo venues will be, as well as Yasugi City and Matsue City, to explore their attractions. 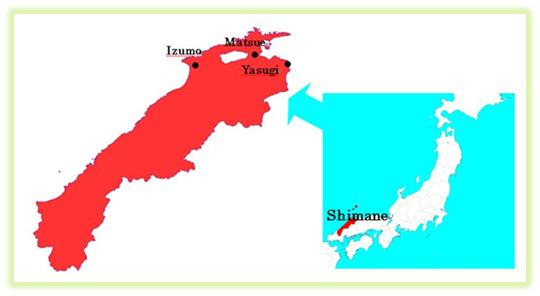 The Castle Town of Matsue

The symbol of Matsue, without a doubt, is Matsue Castle. Built in the early seventeenth century by the feudal lord Horio Yoshiharu, the castle is now designated as an important cultural property of the state. Samurai residences remain in the vicinity of the castle, creating a castle-town atmosphere, and visitors can enjoy the scenery from one of the pleasure boats plying the castle moat as well.

A pleasure boat plies the moat around Matsue Castle.

I boarded one of these pleasure boats at a landing point near the site of the main gate of Matsue Castle. On the left you can see the castle walls and, as the boat moves along, Matsue History Museum comes into view on the right. Some young female tourists were cheerfully riding rented bicycles along the promenade around the castle, their black hair blowing in the wind. After the boat had passed Ugabashi bridge on the right and followed the castle wall to the left, a historic samurai residence came into view on the right. This is the Shiomi-Nawate district, which even today retains the atmosphere of the Edo period (1603-1868). Green pine trees peered over the brown wooden wall, and a white lantern hung on the large gate. Riding along in the boat, listening to the boatman’s eloquent talk about the history of Matsue Castle, and gazing at the castle walls on the left and the samurai residences on the right, I began to feel very relaxed indeed—at one with the fowl playing on the surface of the water.

One of the many enjoyable aspects of this pleasure boat ride is the boatman’s banter. Apparently it is a popular job that attracts many applicants not only from Shimane Prefecture but from across the country. I asked the boatman what the secret was for getting employed despite the many applicants. “The conditions are your looks,” he replied with a laugh, “and a good singing voice.” “So let me sing you a song,” he added, and, almost as if he had planned it, began singing a Shimane boat song just as we passed under a bridge. Excellent timing! The bridge produced a marvelous acoustic effect, and his melodic voice resonated wonderfully. The boatman’s performance drew a thunderous round of applause from the passengers on the boat.

Speaking of bridges, there is one ritual on the pleasure boat ride that I really must mention. Several of the bridges along the moat are very low, so every time the boat passes, the boatman has to lower the roof of the boat. As the roof lowers automatically, the passengers have to lower their heads too. Funnily enough, this ritual creates an odd sense of camaraderie among the passengers.

The leisurely boat ride takes just less than one hour and goes past places you would not otherwise have the chance to see. It’s definitely worth doing! 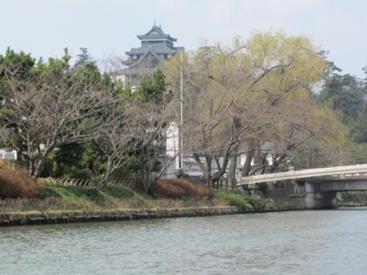 Matsue Castle looks especially grand when seen from the boat.

The delicate and colorful confectionery at the counter all looked absolutely delightful. When I clearly could not decide which to choose, Mr. Itami confidently recommended me to try the warabi-mochi (made from bracken starch).​ 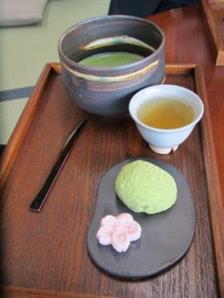 Sitting myself down in the tatami-floored corner reserved for eat-in visitors, I gazed out at the Japanese-style garden. Soon a smiling waitress brought over my tea and lush green warabi-mochi. When I took a bite of the jelly-like confection covered in soybean flour, I didn’t need to chew at all; it just dissolved instantly in my mouth. What a superb taste! At that moment, I understood exactly why Mr. Itami had been so confident. Glancing out of the window, I saw the castle donjon looking down on me.

The flow of time in Matsue was real quality!