The view of Iruma's tea fields from the observation platform 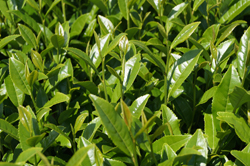 On May 11, 2018, during the period of the first-crop harvest, which is said to produce the most delicious green tea, I visited Tokyo’s nearest premier tea-producing region in the vicinity of the Sayama Hills in western Saitama Prefecture. Centering on the cities of Iruma, Sayama, and Tokorozawa, the Sayama tea-producing region is just a one hour or so train ride from central Tokyo. For tea plants, which like a warm and rainy climate, this is said to be the northernmost economic zone for producing tea in large quantities. First, I visited Iruma, which has the largest area of tea-growing land in the region. There, with the cooperation of the Saitama Prefecture Tea Industry Research Institute and the Iruma City Museum, I learned about Japanese green tea and the characteristics of Sayama tea within the world of Japanese tea. Then, despite the fact that this is the busiest time of the year, a producer in Sayama allowed me to actually see the process of producing first-crop tea (ichibancha).