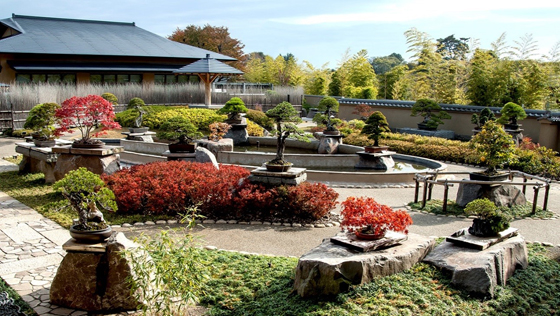 (This article was written by Ms. Rumiko Ishida, a curator at the Omiya Bonsai Art Museum, Saitama, in commemoration of the holding of the World Bonsai Convention in Saitama City in April 2017.)

Although readers may have heard the term “bonsai” at least once, probably there are not so many of you who are actually engaged in growing bonsai. In Saitama City, however, bonsai (dwarfed potted plants) are familiar to many people, young and old alike. Local elementary school children grow bonsai at school, and bonsai classes are held in district community centers. One of the reasons is the existence in the city of the Omiya Bonsai Village, which has nurtured the development of a unique bonsai culture in the district. (After the Great Kanto Earthquake in 1923, some bonsai gardeners in Tokyo moved out to Omiya and built the Omiya Bonsai Village.) Here I would like to introduce the Omiya Bonsai Art Museum, which is located in the Omiya Bonsai Village.

Exhibiting Bonsai All Year Round

Foreigners visit the Omiya Bonsai Art Museum almost every day. Bonsai is now popular internationally, and there are aficionados around the world. When it comes to museums on the subject, however, the Omiya Bonsai Art Museum is perhaps the only one of its kind in the world. Overseas, bonsai exhibitions tend to be limited to designated spaces in botanical gardens and so on.

The main characteristic of the Omiya Bonsai Art Museum is that it exhibits living bonsai as a living art. In particular, bonsai aficionados from overseas are full of praise for the fact that the museum displays indoor exhibitions of bonsai even in the spring and summer, when looking after bonsai is said to be especially difficult. A bonsai grower from the United States who visited the other day was extremely impressed.

Furthermore, in the outdoor bonsai garden visitors can see about 50 bonsai on permanent display throughout the year. These include a Chinese quince bonsai, which was the first designated “important bonsai masterpiece,” and bonsai plants said to be several hundred years old. (Designated “important bonsai masterpieces” are bonsai that are certified by the Japan Bonsai Association as having outstanding artistic, scientific, or historical value.) Visitors can appreciate numerous precious bonsai throughout the four seasons. 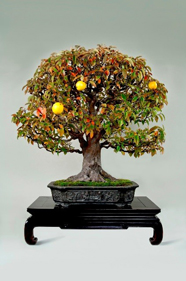 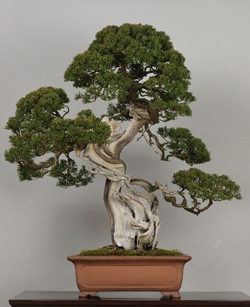 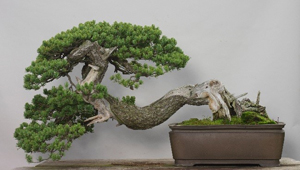 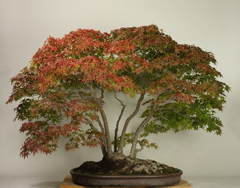 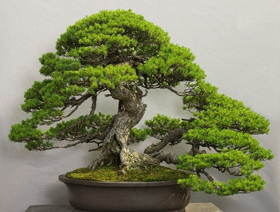 Explaining the History of Bonsai through Works of Art

While the main displays are the indoor exhibitions, which change weekly, and the bonsai exhibition, the museum’s biggest strong point is the exhibition of art works held in the special exhibit room and elsewhere. Both in Japan and overseas, there are many exhibitions of bonsai alone, but opportunities to learn about the history of bonsai through the systemic collection and display of works of art relating to bonsai are few and far between. At the Omiya Bonsai Art Museum, the special exhibition titled “The Story of Bonsai” introduces, in an easy-to-understand manner, a wall painting in China said to be the first-ever drawing of a bonsai, the depiction of bonsai in Japanese scrolls of the past, the appreciation of bonsai among feudal lords, and so on.

By viewing the dynamic attractions of living bonsai in the outdoor bonsai garden and learning about the history of bonsai in the indoor special exhibit room, visitors can understand, through bonsai, one aspect of the development Japanese culture and the international links that lay in the background.

Bonsai as an International Bridge of Friendship

Together with the spread of bonsai culture around the world, the number of foreign visitors to the museum is increasing year by year. Bonsai lovers obviously make their way here, but there has also been an increase in the number of foreign visitors with an interest in not only bonsai but also Japanese landscape gardening and traditional culture. Some foreigners come to the museum after, for example, seeing Japanese gardens in Kyoto and elsewhere. Reasons for visiting the museum are varied. Last year a couple visited on the last day of their trip around the world.

The Omiya Bonsai Art Museum is not very big compared with other art museums, but bonsai lovers flock here because there are few, if any, other places in the world where so many bonsai can be seen in one place and throughout the year. The other day bonsai lovers from France and Belgium visited the museum and could be heard passionately discussing the bonsai in French, saying things like “Such graceful branches!” and “The harmony with that hanging scroll!” Since everyone shares a common love of bonsai, they talk cheerfully about their favorite bonsai and cultivation techniques in their own regions, regardless of nationality. Every day all kinds of languages can be heard at the museum, making one sense that the topic of bonsai is expanding the circle of friendship around the world. Indeed, there are now special schools of bonsai not only in Asia, where bonsai was born, but also in such countries where bonsai is especially popular as the United States, Italy, France, and Spain. 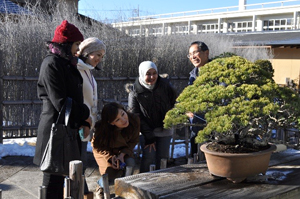 For this reason, the museum has an English-speaking staff member stationed at the reception at all times, and volunteer guides offer tours in English. In addition, there are audio guides in four languages (English, Chinese, and Korean, as well as Japanese), and the museum’s guidebook and Facebook page are bilingual (Japanese and English). The museum hopes to continue to serve as a place where bonsai lovers and visitors from around the world can engage in lively exchange through bonsai and Japanese culture.

World Bonsai Convention in Saitama: Gathering of Bonsai Lovers from around the World

The 8th World Bonsai Convention will be held at the Saitama Super Arena and other venues in Saitama City from April 27 to 30, 2017, attracting bonsai lovers from around the world.

The World Bonsai Convention is held once every four years and is sometimes dubbed the “Bonsai Olympics.” The main objective is to deepen friendship among bonsai lovers around the world through bonsai. This year, at the Saitama Super Arena, which will be the main venue, there will be a display of more than 300 bonsai, as well as a display of famous bonsai, demonstrations by bonsai artists, bonsai production, and various events to experience Japanese culture, such as kimono wearing. It will be an international event attended by bonsai lovers from many countries. As a subvenue, the Omiya Bonsai Art Museum will hold a special exhibition featuring famous bonsai and works of art, as well as a display of about 250 bonsai created and grown by local elementary school children at school.

In addition, every year the Grand Bonsai Festival is held at the Omiya Bonsai Village in conjunction with the “Golden Week” string of national holidays in Japan at the end of April and beginning of May. This year the festival will be held on May 3–5, after the World Bonsai Convention. Stalls around town will be selling bonsai and other items, and there will be displays of bonsai produced by citizens. The six bonsai nurseries in the vicinity of the museum will display original bonsai gems created by their owners.

So from the end of April into May Omiya will be hosting many bonsai events. The weather at this time of the year is just right for a stroll, so why not take the opportunity to learn more about the world of bonsai? 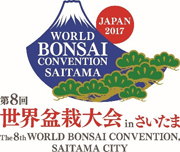 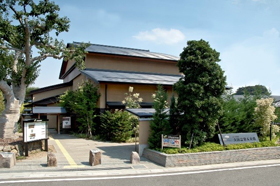 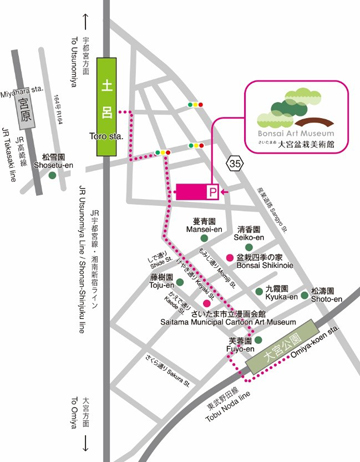