It is said that Mt. Aso began its volcanic activity with a major eruption some 270,000 year ago and that the present caldera was formed by an eruption and large pyroclastic flow 90,000 years ago. With its unique scenery, climate, and atmosphere, the Aso caldera attracts around 17.5 million tourists a year. I visited Mt. Aso in midsummer to take a look at the attractions for myself.

What Is the Aso Caldera?

From Aso Kumamoto Airport I drove along a national highway toward the city of Aso, my destination being Aso Station on the JR Hohi Main Line. When the car entered the city area, the five peaks of Mt. Aso came into view beyond green paddy fields. This was my first visit to Aso, though, and what really impressed me most was the outer rim of mountains stretching endlessly, like a huge wall, on the left-hand side of the highway coming into the city. I had never before seen such a uniform mountain range. That was my first impression of Aso.

The outer rim of mountains forms the edge of the caldera created when the land subsided at the time of Mt. Aso’s major eruption 90,000 years ago. (A caldera is a large basin created by volcanic activity. In Spanish, caldera means cooking pot.) Broadly speaking, the topography of Aso can be divided into three elements: the outer rim of mountains, the plains inside the caldera enclosed by them, and the central group of five peaks collectively known as Mt. Aso (Neko-dake, Taka-dake, Naka-dake, Eboshi-dake, and Kishima-dake). The Aso caldera is one of the largest in the world, measuring 18 km east-west and 25 km north-south; approximately 50,000 people live in the plains inside the caldera. 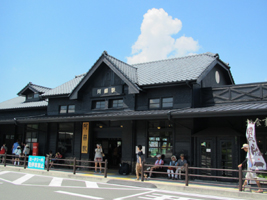 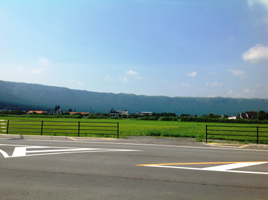 The caldera is enclosed by an outer rim of mountains.

The Aso volcanic group rises 600–1,600 meters above sea level, the outer rim of mountains rise 400–1,200 meters above sea level, and the plains inside the caldera are 400–600 meters above sea level, so although the district is situated down south in Kyushu, it has a relatively cool alpine-like climate. I visited in the sweltering heat of early August, but nevertheless the temperature in Aso was several degrees lower than in nearby Kumamoto City. Furthermore, Aso has a large rainfall of 3,000 mm a year, so it serves as a valuable source of water for cities in Kumamoto and neighboring prefectures.

Taking advantage of the area’s favorable natural conditions (cool summers and little blight) and abundant prairie land, farmers are able to cultivate crops using less pesticide and chemical fertilizer. During my visit, I thought the green heads of rice swaying in the summer breeze were beautiful, and the summer vegetables were most delicious. 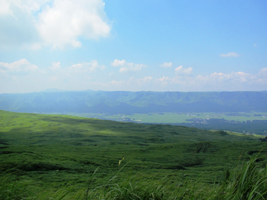 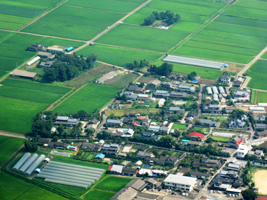 Farmland on the plain

Thanks to the area’s plentiful grassland, the production of beef, including Akaushi, horsemeat, and dairy products is thriving as well. The sight of cattle leisurely chewing grass on the plains of the five central peaks and outer rim is typical of the pastoral atmosphere of the Aso grasslands. Every time I came across a scene like that, I could not resist stopping the car and taking a snap. (Akaushi, by the way, is a breed of Japanese cattle originating and developed in Kumamoto and well-suited to grazing. The beef produced by Akaushi cattle has much red meat and moderate fat and is tender and healthy.) 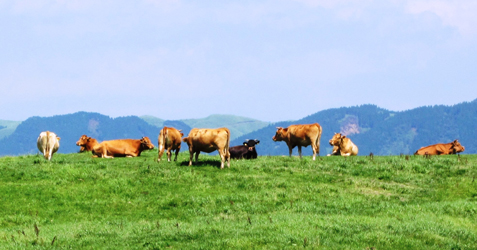 On this visit, I was also able to take a helicopter ride over the northern outer rim to see the grassland from the sky. Looking down from the helicopter, I got a much better sense of the vastness of the grasslands, which is not so apparent at ground level. As a result of the ride, the stature of the grasslands in Aso’s natural landscape grew even larger in my mind. 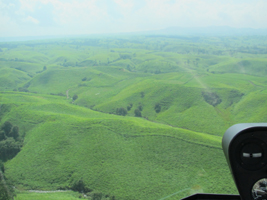 From above, you can appreciate the special characteristics and grandeur of Aso’s topography.

The history of grazing on the Aso grasslands is said to go back more than 1,000 years to the Heian period. In order to prevent afforestation and maintain the gently sloping extensive prairies, grass burning is carried out every March in what has become a springtime tradition. 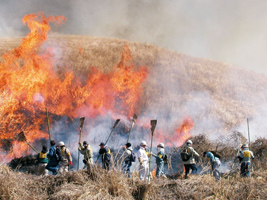 Feeling the Earth’s Energy: Naka-dake Crater and the Surrounding Geopark

Areas that have been inspected scientifically and found to have a lot of especially important, valuable, or beautiful geological heritage are called geoparks. The inside of the Aso caldera and external slopes of the outer rim of mountains received certification as a national geopark of Japan in 2009. The area is now (August 2013) aiming to be recognized as a world geopark. 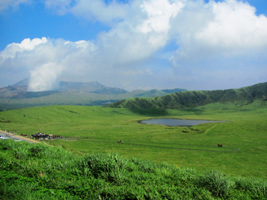 The green grass contrasts with the white smoke rising from the crater.

Naka-dake, which occupies a central place in the Aso geopark, has been continuing volcanic activity since prehistoric times to the present and is one of the main active volcanoes in Japan. I drove along Aso Panorama Line toward the Naka-dake crater, watching the Akaushi cattle grazing on the grassland as I went, and eventually the landscape just before the crater, from which white smoke was rising, opened up in front of me. Called Kusasenri, this area is very popular among tourists who enjoy horseback riding against the dynamic background of the volcano.

There are various ways of getting up to the Naka-dake crater. Healthy people can walk up a footpath. If you don’t fancy walking, you can go by car along a toll road. I am not so confident in my walking ability, so I took the ropeway up to the crater station and then came down via the footpath.

The day on which I went was fine and there were no volcanic gas warnings or alarms、so I was able to go close to the crater. Upon emerging from the crater station, I was immediately greeted by that distinctive sulfur smell. The crater is clearly visible from the designated observation area. I had never seen such scenery before—the white smoke rising from the crater, the Yudamari looking like an emerald green lake, and the exposed layers of rock creating a peculiar sense of wilderness. 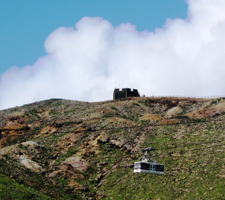 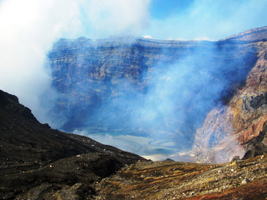 One million tourists visit the Naka-dake crater every year.

After observing the crater up close, I headed back down the footpath, which took me past the barren scenery near the crater. On the way, I veered away from the path into the Sunasenri area of sand and rocks, where I bumped into a couple from the Netherlands. When I asked them what they had thought of the crater, the reply was, “Fantastic! We wanted to get closer, but it’s a little dangerous, isn’t it?!”
Aso is an awesome and unique tourist spot. Because the crater is constantly emitting sulfur dioxide, people who suffer from asthma, bronchitis, or heart disease are prohibited from visiting it. And depending on the density of the gas, controls are sometimes placed on crater viewing even by healthy people. It is an active volcano, after all. 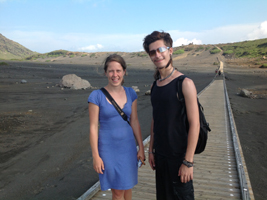