Many foreign tourists visit Kyoto. No doubt they get a sense of Japanese culture from the historic temples and shrines, the Kyoto-style machiya (traditional townhouses) exuding the warmth of timber, and the sight of maiko (apprentice geisha) in their gorgeous attire. Another attraction of Kyoto is that visitors can enjoy the essence of Japanese cuisine, which is becoming increasingly popular around the world. Apart from just seeing and eating, however, the reality is that opportunities to actually experience Japanese culture and make Japanese cuisine yourself are few and far between. Here we introduce the highly appraised international exchange activities of Kyoto-based WAK Japan, which organizes Japanese cultural experience programs and visits to ordinary households.

Known as the “kitchen of Kyoto,” the Nishiki Food Market shopping street has a history of 400 years. Its prosperity is said to have begun in 1615, when business as a fish market was approved by the Tokugawa shogunate. Although its role as a wholesale market ceased with the opening of the Kyoto Central Wholesale Market in 1927, even today there are 126 stores trading along a street stretching 390 meters east to west. Kyoto vegetables, pickles, salt-sweet preserves, dry foods, tofu, soy-milk skin—all of the essential ingredients in Kyoto cuisine can be obtained here.

There are many delicatessen and confectionery stores, as well as restaurants, and tourists can be seen sampling food and eating lunches and snacks as they browse for souvenirs. Unusual ingredients, colorful confectionery, and other goods line the narrow spaces. The market is very popular among foreign travelers too, because it offers them a glimpse into the culture and cuisine of Kyoto. The store assistants are used to having foreign customers, and they can be heard explaining goods and recommending samples in broken English.
WAK Japan offers a Japanese cooking experience program in which participants go shopping in Nishiki Food Market and then use the ingredients they have bought to cook something. I accompanied the participants to see how they reacted. 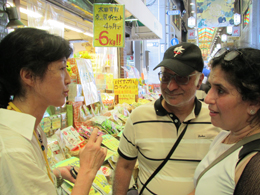 Mr. Himanshu Lakhani and his wife Arati, who are of Indian origin residing in Australia, were visiting Japan for 16 days. Following the wishes of Arati, who likes cultural things, as well as mainly Kyoto they were also going to such places as Hiroshima, Takayama, Ise, and Toba before finally returning home from Tokyo. In Kyoto they were planning to go to Arashiyama, watch a maiko show, and enjoy WAK Japan’s experience programs. As well as the stroll in Nishiki Food Market and Japanese cooking experience on that day, they had made reservations for calligraphy and origami classes too.
The WAK Japan guide, Ms. Yoko Akamizu, took them into various stores in the market and explained about ingredients of Japanese cooking that are especially unfamiliar to foreigners. She offered a wealth of information that foreigners cannot get just by walking around themselves, such as the types of pickles and how to make them and the flavor components and uses of kelp and dried bonito. The participants listened with great interest. 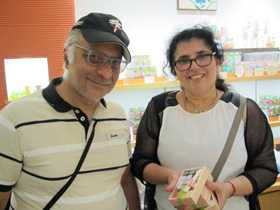 Ms. Arati Lakhani said that she had many allergies, including meat and other protein, so she was very cautious about food and accepted samples only after verifying their contents. She liked the processed kudzu somen (noodles), which seem to blossom like flowers when deep-fried, and boxes of candies in the shape of hand-rolled sushi, which she bought as souvenirs.
Ms. Akamizu, the guide, also purchased some dried bonito shavings at a dry-food store, saying that they would be used in the cooking class later. How would they be used? This was certainly something not to be missed! 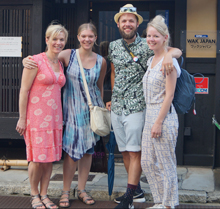 After the shopping experience in Nishiki Food Market, the participants moved to the Japanese cooking experience venue. The cooking class takes place either in the kitchen of WAK Japan’s machiya, built 100 years ago, or in the kitchen of a renovated machiya annex. This time it took place in the annex, with Ms. Machiko Kimura, who can teach cooking in English, serving as the instructor.
There were four people taking part in the cooking class. Ms. Kimberley Camera and her daughter Kristin were on a 10-day visit to Japan from New York. The mother, Kimberley, had visited Japan before. Kristin, who said that she had seen all of the Ghibli animation films, was visiting for the first time. In Tokyo they had been to the Ghibli Museum, which Kristin described as terrific. Her excitement had clearly not yet died down. The other couple was Mr. Rob Millard and his wife Alice, who were on a two-week honeymoon from London. Before coming to Kyoto they had climbed Mount Fuji. Sleeping in a hut at the eighth station packed with other climbers had been rough, but more than anything else, they said, seeing the sunrise from the top of Mount Fuji was a wonderful memory to take home. 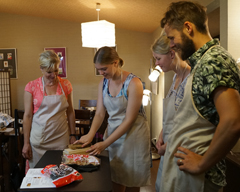 Next they made vinegared rice for the rolled sushi, tasted the dashi stock made with their dried bonito shavings, and then had a go at the most difficult task of all—making tamagoyaki (Japanese-style rolled omelet). This involved pouring some beaten eggs mixed with the dashi stock into a special frying pan for tamagoyaki, cooking them, moving the omelet to the side of the pan, wiping more oil on the pan,

pouring in more beaten egg mix, cooking it, and then rolling it on top of the already cooked omelet. Looking very serious, the participants took turns to cook the omelet and beamed with delight when they succeeded in rolling it well. I asked Alice and Rob Millard, who said that they ate Japanese food in London about once a week,

what Japanese food they had enjoyed eating in Japan. In London, they said, they ate mainly sushi, so in Japan they had become great fans of yakitori (grilled chicken). The food that they liked making most in the cooking class was tamagoyaki. “It was difficult to make,” said Alice with a smile, “but I enjoyed it a lot.”

When the cooked tamagoyaki, cucumber, crab sticks, and other ingredients were ready, it was time to make the rolled sushi. Sheets of toasted nori (dried laver seaweed used for wrapping the sushi) were placed on bamboo sushi mats with appropriate quantities of vinegared rice heaped on top of them. Following the instructions of the teacher, the participants dipped their fingers into a bowl of water and vinegar before spreading the rice over the nori, adding the other ingredients, and then rolling. At the moment when the rolling began, the teacher explained the techniques that were necessary, such as how to hold the bamboo mat, how to use your fingers, and how to apply strength. Everyone then commenced rolling, and all four of the participants did a very good job.

The Cameras from New York remarked that making the rolled sushi had been very enjoyable. They had not known anything about dashi stock, so it seems to have been a good learning experience for them. The two of them had been fans of Japanese food before, but Kristin said emphatically that the food they had eaten in Japan was “much, much more delicious” than the food they ate in New York. She had also been impressed by the comment of the guide during the shopping expedition to Nishiki Food Market that “We eat everything that can be eaten [in vegetables, fish, and so on] and don’t waste a thing!”
The Cameras and Millards had all done a lot of traveling to European countries and the United States. When I asked them which country they liked most, they all replied without hesitation: “Japan!” They added that Japan was so fascinating because its culture was entirely different to that of the West and that experiencing the different culture had been the highlight of their trip to Japan. 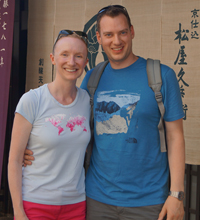 Wakuwaku Kan, which serves as the base for WAK Japan’s experience programs, is an unreformed Kyoto-style machiya built 100 years ago. The building, with its wonderful small courtyard garden, gives a feeling of Kyoto’s daily life culture and provides an ideal venue for experiencing traditional Japan. I went to see kimono and tea ceremony experience programs being held at the Wakuwaku Kan.
Tim and Lucy from the suburbs of London love traveling and, as well of course as Europe, had been to such countries as the United States, Peru, Russia, Australia, New Zealand, India, and China. This time they were staying in Japan for 10 days, and their itinerary included visits to Tokyo, Hakone, and Hiroshima and then three nights and four days in Kyoto and Nara. 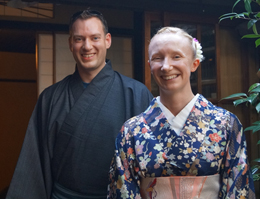 Befitting the scorching heat of Kyoto, Tim and Lucy had arrived at the Wakuwaku Kan in casual dress. After cooling down in an air-conditioned room, they went up to the second floor and changed into kimono. When they came back down to the first floor for photography and the tea ceremony experience, they looked as if they had transformed into completely different people. “It’s a bit hot and tight,” said Lucy of the kimono, “but the atmosphere is very traditional and special. It makes 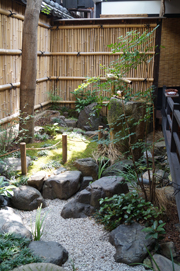 me feel very graceful.” They went out into the small courtyard garden, a very Japanese space, to have their photos taken. Maybe because they were wearing not light yukata (summer kimono) but the real thing, they did indeed look very elegant, and it was hard to believe that they were wearing kimono for the first time.
I was not able to accompany them to the tea ceremony experience and take photos freely there, so I waited in the next room until the instructor, Ms. Asuka Adachi, allowed me to come in. Through the sliding door I could hear Ms. Adachi explaining, in polished English, about such things as the history of tea, cultivation methods, the difference between leaf tea and matcha (powdered green tea), the health effects of tea, and the etiquette of the tea ceremony and its influence on present-day Japanese. The instructor then gave me permission, and I took several photos in the dark tea ceremony room. As she prepared the matcha, Lucy’s figure blended perfectly into the traditional Japanese setting. After the program had ended, I asked Tim and Lucy for their impressions. Looking very satisfied, they replied that they had experienced just drinking matcha at other 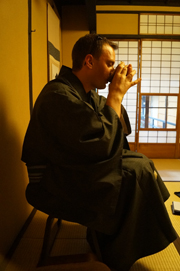 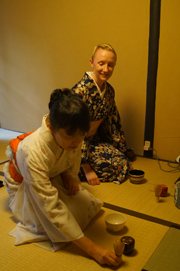 places before, but actually making it had been a first for them and a wonderful experience. And most of all, they added, the instructor’s commentary had been excellent.

In addition to the existing Wakuwaku Kan machiya, at the end of August 2015 WAK Japan opened a new barrier-free facility by the Kyoto National Museum. Amenities include a wheelchair-type stairlift and multipurpose toilet. The program menu and lineup have been improved too, and there are always staff

on hand who can speak English and provide care support. So visitors can now enjoy Japanese cultural experiences regardless of their age or disability.