The History of Noh

The origins of Noh date back to the middle of the fourteenth century—three centuries earlier than the time of the famous playwright Shakespeare in England. Based on comic imitation and acrobatics brought over from mainland China in the eighth century, the artistic dramatic style of Noh was perfected by Zeami (1363–1443), the eldest son of the popular actor Kan’ami (1333–84). When he was 12, Zeami performed with his father in front of the shogun Ashikaga Yoshimitsu (1358–1408), the supreme ruler of the time, who recognized their talent and provided them with lavish support. That was the first step toward the establishment of Noh. It was the time of the Renaissance in Europe. Zeami went on to become a playwright, producer, and actor. He left behind nearly 50 plays, which are still faithfully performed even today, 600 years later. These Noh plays can be said to be continuing to transmit the spirituality lying at the root of the Japanese.

A Noh play is a kind of opera or musical in which a small orchestra (hayashikata) consisting of a flute and three percussion instruments and a chorus (jiutai) explaining the scenes and conditions of the tale position themselves around the stage, and the story unfolds with the main actor, wearing a mask and resplendent costume, delivering his lines in a song-like manner and performing elegant dances. Noh is recognized to be the oldest total performing art in the world. Together with Kyogen, a humorous dialogue drama performed on the same stage, Nohgaku (Noh and Kyogen) was listed as a UNESCO Intangible Cultural Heritage in 2008.

So, let us have a look at the special features of Noh. First, there is the structure of the stage. There is no curtain separating the stage from the audience, and it is an extremely simplified space. To the left as you face the stage, by the side of a passageway called the hashigakari leading from the dressing room to the stage, there are three small pine trees. Even though it is indoor, the stage has a roof—a legacy of days gone by when Noh was performed in independent buildings outdoors. Other than a picture of a large pine tree at the back, facing the audience, the stage has no decorations or props. The main stage, where the actors perform, is about six meters square. 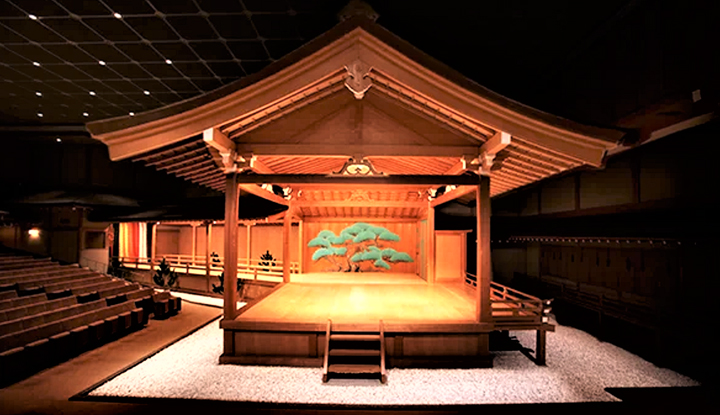 So, why is there only the pine tree drawing? Well, the pine tree is an evergreen that does not wither during the year and lives a long time. In Japan, it has been thought of as a sacred tree since ancient times. Even today, there is a custom of decorating the entrance to homes with pine branches at New Year’s. The pine drawn at the back of the Noh stage is an old tree (oimatsu). Since deities are believed to reside in this tree, the picture is an expression of the stage’s role as a place of exchange between the deities and humans through dance. However, because the actors face the audience when they perform, they have to direct their buttocks toward the deities in the pine tree, which is highly irreverent. Therefore, a real pine tree is placed behind the audience seats, and the pine drawing on the stage is said to be a mirror image of it. That is why the whole back panel on which the old pine tree is drawn is called the kagami ita (mirror board).
While that is a rather expedient interpretation, it can certainly be said that the stage expresses a wondrous space where fact and fiction are already intermixed and where the drama mingles the real world and the illusionary world. In the plots of the majority of Noh plays performed here, characters from this world (the real world) and that world (the spiritual world) have an encounter beyond time, reveal their thoughts, clash with each other, and eventually the spirit departs.
Throughout the play, the background does not change, only a few props are brought onto the stage, and the main actor’s face is covered by a mask, so his expression never changes either. His gestures also are only gentle movements in tune with the music. It is, in other words, a symbolic play. Members of the audience must picture the setting in their own minds and imagine the mental state of the performing characters.

The Japan Arts Council, a general center for the performing arts, has produced a video explaining Noh that will help you to understand also why Noh, a musical, and Kyogen, a comedy featuring humorous dialogue and gestures, are performed on the same stage.
https://www2.ntj.jac.go.jp/unesco/noh/en/introduction/
*The small Language window on the upper right offers a choice of eight languages.

The Noh stage is only an empty space. But as the story unfolds, in the audience we find ourselves imagining it as a hut in the depths of the mountains, or a palace in the capital, or sometimes even the bottom of the sea. The fascinating thing about Noh is that it whisks us, in an extremely simple way, on a trip through time. Let us take a look at a play called Ama (The Woman Diver), which offers dramatic changes in time and space. 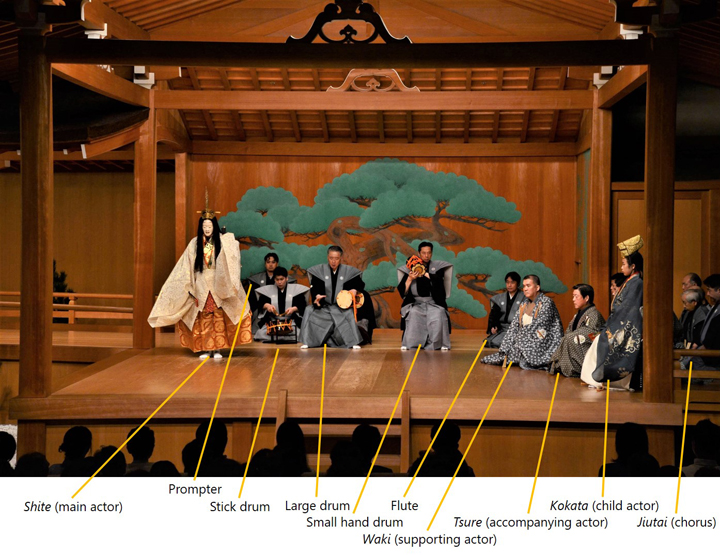 The shite is the main character, and the waki is the supporting actor, who in this play is accompanied by a tsure (accompanying actor). The kokata (young character) is performed by a child. At the back of the stage there are the four instrumentalists. Behind the column on the right there is the eight-man chorus, seated in two horizontal rows. The structure itself, including the section under the stage, is designed to aid acoustics, so there is no need for microphones or speakers. Furthermore, the stage lighting is uniform, with no variations between day and night and no spotlight on the main actor.

Synopsis of Ama
A young minister from the capital, played by a kokata, visits a remote fishing village to hold a memorial service for his deceased mother. A woman diver (whose job is to harvest seaweed and fish) then appears and begins to talk about the past. She says that the minister’s father had come to this area to retrieve a cherished jewel that had been stolen by the dragon king’s palace. On that occasion, a beautiful woman diver had the father’s baby. The father promised that if the woman diver retrieved the jewel from the dragon king, he would take the child as his heir. So the woman dived to the dragon king’s palace at the bottom of the sea and found the jewel. The palace dragons realized what she was up to and chased her. The woman cut herself under her breast to hide the jewel in the gash and, concealing herself in the dripping blood, eventually managed to bring it back before dying. Expressing the scene in a dance, the woman diver finally reveals that she is that woman’s ghost and the young minister’s mother. She then disappears into the sea. After hearing details of the incident from the village people, the young minister holds a memorial service for his mother. During the service, the spirit of the mother appears in the form of a dragon lady. Performing a dance, she expresses delight at having attained Buddhahood by following the Lotus Sutra. 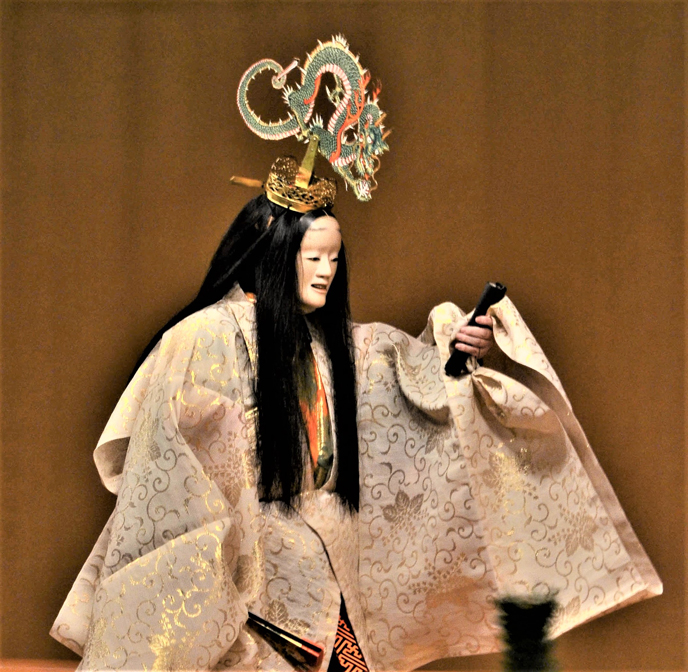 After revealing that she is the minister’s mother, the main actor reappears, this time as the dragon lady. Though she appears to be a beautiful woman, the role is played by a man. Since Noh masks are made small, the eyes of the main actor are lower than the position of the eyes on the mask. This extreme restriction of vision is a characteristic of Noh acting.

Looking at a photo of the stage as a whole, many people might think that the front two columns are a nuisance and could be removed. But these columns are an important guide for the main actor; they might be called the backbone of Noh. With his vision restricted, the main actor is just able to check the boundaries of the stage thanks to these columns. But why is it that Noh uses such awkward masks that make it so difficult to see? 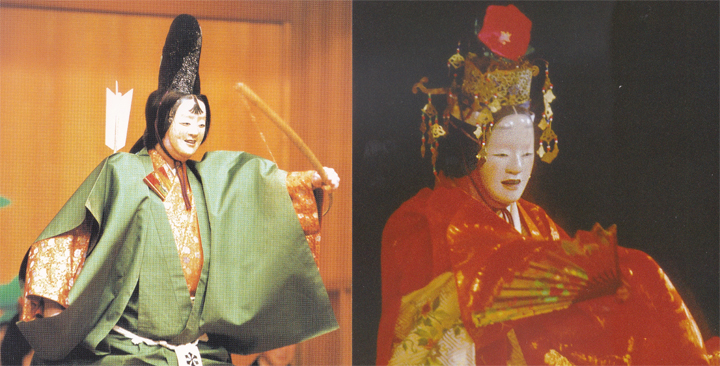 The answer is that by restricting his own vision, the actor is able to immerse himself into his role and psychologically identify with the character. Moreover, Noh has a uniquely distinguishing element. Mask drama, such as in Greek plays, has existed around the world since ancient times. In those cases, the mask covers the actor’s entire face. Noh masks, however, are made smaller so that a few centimeters of the actor’s chin are exposed (as in the photo). It might seem unnatural for a man’s chin to be showing beneath a mask (face) of a woman, but conversely this serves to express, in a visible manner, the oneness of the character in the story and the performing actor.

The Philosophical Observation of Claudel

Paul Claudel (1868–1955), a French poet and playwright, served as the French ambassador in Japan for four years from 1921. He is known to have been a great fan of Noh. Regarding the relationship between mask and actor in Noh, Claudel wrote: “The Noh mask blocks the performer’s body. At the same time, it protects the performer from outside influences. Through the performer’s psychological isolation in this manner, Noh has acquired a style crossing time and space. It is not so much emotions existing inside the performer as the performer placing himself inside emotions.”
Claudel left behind many works that drew their ideas from Japan. One of them is Le femme et son ombre (The Woman and Her Shadow), which features a samurai, the ghost of his former wife, and his second wife and gives form to the echoes of their inner minds intercrossing in darkness. Claudel himself apparently described the work as “my Noh.” In 2018 it was performed at the National Noh Theater in Tokyo and elsewhere as the creative Noh play Omokage (Shadow). 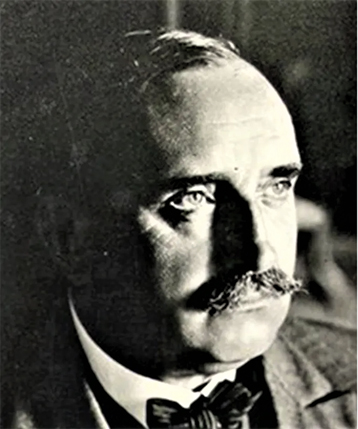 Paul Claudel when he was the French ambassador to Japan 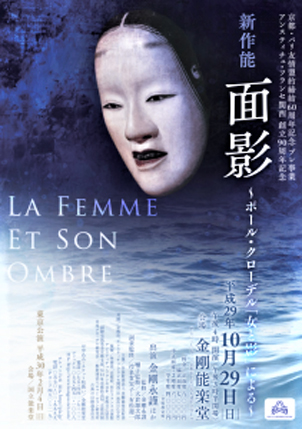 In this first part I have introduced Noh as the world’s oldest total performing art and mentioned its worldwide appeal. In the second part I will introduce the play Hagoromo (Celestial Feather Robe), in which a celestial maiden is the heroine, as well as Takigi Noh (outdoor performances by torchlight).