This time IHCSA Café had a talk with Mayumi Yamazaki, who is active as a nonfiction writer and hot-spring essayist. Because of her efforts to convey Japanese onsen (hot spring) culture overseas, Ms. Yamazaki has been appointed by the minister of land, infrastructure, transport, and tourism as a Visit Japan Ambassador. She is endeavoring to disseminate Japan’s onsen culture both domestically and internationally and to spread the circle of “naked exchange.” 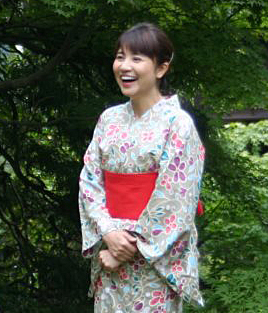 Café: You are active as a hot-spring essayist. What was it that first aroused your interest in onsen?

Yamazaki: In 1997, my first year as a freelance writer, I was offered the job of writing a series titled “A Guide to Little-Known Mixed Onsen” for the outdoor magazine BE-PAL, published by Shogakukan. I thought the job would only involve writing, but then they said they would take photos of me in the hot-spring baths! I asked my father what to do, like, “A job has come my way that involves being photographed in the bath. What do you think?” [Laughs] And he replied, “There’s no need to make a fuss about it. If that’s what you really want to do, just do it!” “You’re right there,” I thought, and accepted the job. [Laughs] 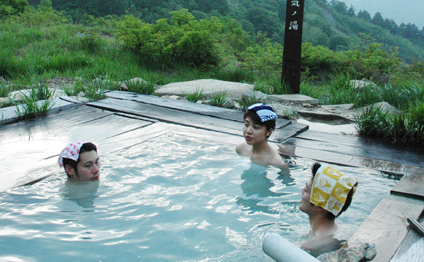 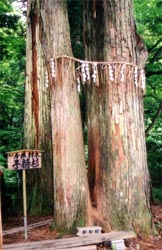 Actually, my parents often told me in my childhood days that, worried about not being able to have any kids of their own, they had visited Tochiomata Onsen in Uonuma, Niigata Prefecture, which was famous for its fertility-galvanizing waters. If women warm their bodies leisurely in the low-temperature radium bath of around 36 to 38 degrees Celsius, boosting their basal metabolism and immune strength, and then go to the Yakushido temple near the inn and bestride the “pregnant cedar” tree, it is said that they will be blessed with a child. Apparently I was born after my mother repeated that ritual. I thought there must be a kind of destiny at work here, so I started my onsen reporting. And I have never looked back!

Café: You visit hot springs all over the place, including overseas. How many onsen have you been to so far?

Café: Have you had any interesting experiences at those hot springs in the 31 foreign countries?

Yamazaki: They say a big difference from Japan is that people enter hot-spring baths in swimwear. The custom of drinking hot-spring water is more common than in Japan too. And in Islamic countries they even wear almost full clothing rather than swimming costumes. Interestingly, though, in countries like Hungary, Germany, and Switzerland people enter hot springs with swimwear on, but saunas are quite different. In saunas, both men and women are stark naked; they don’t even cover their private parts with a towel. 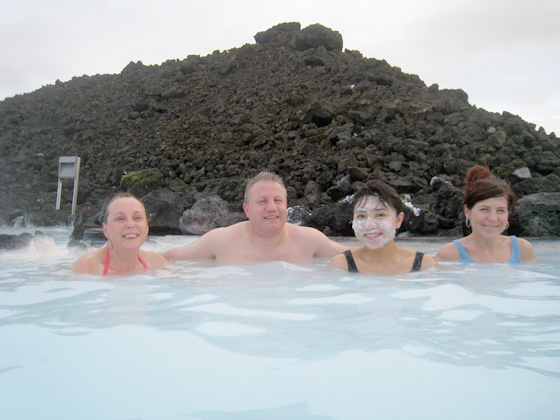 So they are naked when they enter baths in saunas as well. In Japan, even if you are naked, the custom is to cover your private parts. I think it is proper to cover yourself a little! [Laughs] 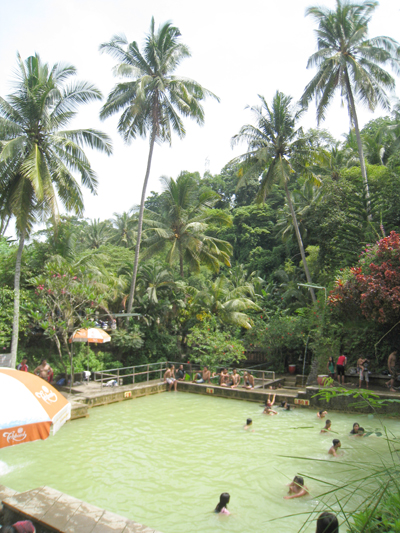 An onsen, which was made
by Japanese, in Bali

At places where the Japanese army went during World War II, soldiers used to make hot springs and bathe in them. Sometimes they would name those hot springs after onsen in Japan. In Rabaul [Papua New Guinea], for example, there is a hot spring called Unazuki Onsen. At first the local people apparently thought it was strange to enter smelly and hot baths, but gradually they realized how pleasant it was, and in many places hot springs became fixtures.

Café: How do you think foreigners should go about enjoying Japanese onsen?

Yamazaki: Foreigners should enjoy not only the onsen but also the Japanese culture in the ryokan [inns] where they are staying. If they are too embarrassed to enter a common bath, first of all they can reserve a bath for their own party. And they should be aware that if they spend an unreasonably long time in the bath at first, they might end up feeling dizzy. We Japanese must warn them about this possibility. Like the water temperature, the method of bathing differs depending on water quality too. 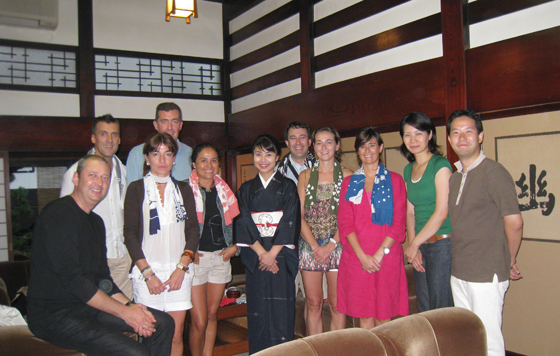 At one onsen I met a woman from Australia. She told me that when she entered the bath and gazed at the ceiling, she felt something spiritual in the bathroom’s atmosphere. I hope foreigners, like her, can enjoy the culture that can be experienced in the ryokan and sense the Japanese people’s spiritual side.

Café: In a new book titled Ofuro to no no ii hanashi [Nice Tales about Baths and Brains], published in June, you have a discussion with the neuroscientist Kenichiro Mogi. Can you tell us a little about some of the interesting tales told in that discussion? 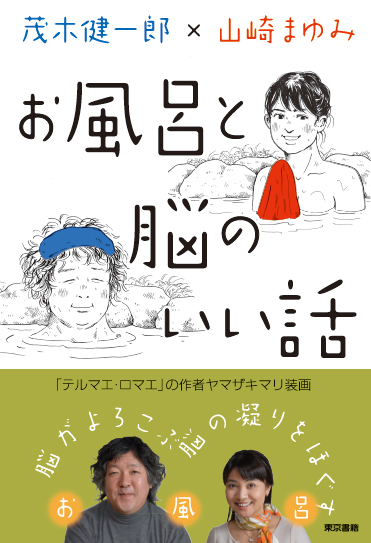 Yamazaki: That book is a collection of discussions I had with Dr. Mogi as we visited hot-spring resorts. I asked him questions about the effects of the hot-spring water and so on, and he replied from the perspective of a neuroscientist. He spoke very frankly and cheerfully. For example, he likened the peace of mind that you feel when soaking in a hot-spring bath to the condition of a fetus in its mother’s womb, and the uplifting feeling you get in an outdoor bath to the rush of dopamine at the time of a first kiss. He also suggested that women were looking for good genes with their five senses. [Laughs] His talk was very easy to understand. Come to think of it, I do take smell into account when choosing compatible partners! [Laughs]
Dr. Mogi said that men like hot springs because the beer tastes good afterward. [Laughs] Women enjoy lots of things like health, beauty, and the delicious food. And even in mixed baths, there are bathing frocks [yuamigi]. [Laughs] But Dr. Mogi added that the relaxed feeling you get in a hot spring puts the brain into a maintenance mode and, in a different sense, activates it to restore balance. That’s why Hideki Yukawa was able to predict the meson theory while in the bath. In that sense, just soaking in a hot-spring bath and not thinking about anything at all is both physically and mentally soothing for everyone, isn’t it? 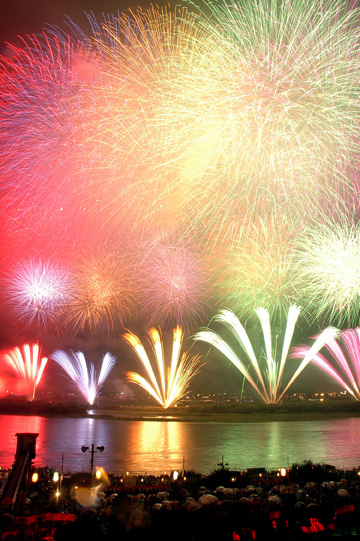 Yamazaki: Well, it’s not entirely unrelated. As I said earlier, when I visited hot springs in other countries, I found that some had been made by Japanese. The soldiers who built them and local elderly people remember those times very clearly, so I wanted to write about them sometime.
Seiji Kase was a friend of my father and a leading pyrotechnician in Nagaoka who I had known since my childhood. After World War II Kase launched the famous sanshakudama giant fireworks at the Nagaoka Festival for the first time, and he created such well-known fireworks displays of Nagaoka as Niagara Falls and Miracle Star Mine. Mr. Kase was a soldier in the war, and after the war he experienced internment in Siberia before returning to Japan. In 1990 he launched some fireworks called Shiragiku [White Chrysanthemums] in Siberia as an offering to fellow soldiers who had died in Khabarovsk.  Furthermore, the talented painter Kiyoshi Yamashita, who was a bit of a vagrant, was inspired by Mr. Kase’s fireworks in Nagaoka to create a collage titled Fireworks in Nagaoka.

Café: Finally, please tell us what your favorite onsen is now and your plans and ambitions for the future.

Yamazaki: When I started visiting hot springs, I liked onsen that had pungent smells and deeply colored water. But now, 17 years later, quite frankly I have come to prefer onsen that are colorless and gentle. For example, Tochiomata Onsen in Niigata Prefecture, which my parents visited, has colorless radium water of about 38 degrees. Places like Kabeyu Onsen in Oita Prefecture and Hoshi Onsen in Gunma Prefecture are similarly colorless and don’t make you feel dizzy. 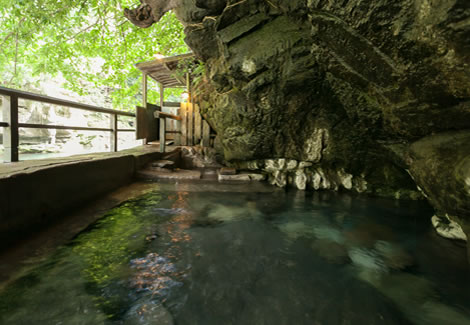 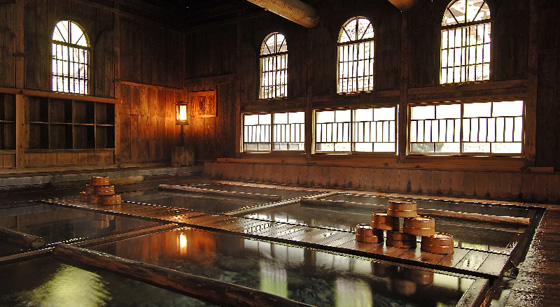 At these onsen the temperature of the spring water at the source is just right. It is pulled directly from spring to bath, so it is very fresh. It is important for an onsen to be near the source and to be fresh. And recently I have come to prefer onsen with a temperature of around 38–40 degrees, because you can soak in them at your leisure. Such onsen resorts often have good lodgings with long histories and fine locations. Moreover, these onsen often have been health spas for a long time, so they have mixed bathing. That’s one reason why I recommend mixed bathing.

When people soak for a long time in a mixed bath and chat with others around them, forgetting all about things like gender and occupation and social status, a kind of pleasant distance is preserved between people. And when I meet old men who enter the onsen every single day, they appear just like hermits. So my future ambition is to continue visiting onsen and maybe become a hermit like those old men! [Laughs] I want to become just like a hot spring itself! 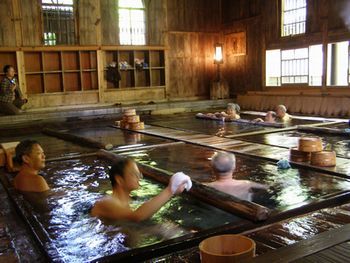 Our guest this time was Mayumi Yamazaki, a “future hermit.” (Laughs). For the next year Ms. Yamazaki will be writing essays for IHCSA Café offering tips about how to enjoy hot springs in each season and how to make foreign tourists understand the attractions of Japanese onsen. We very much look forward to her contributions and hope you enjoy them too.

Born in Nagaoka, Niigata Prefecture. Nonfiction writer and onsen essayist. Introduces the attractions of hot springs in newspapers and magazines and on television and radio, etc. Her numerous publications include Dakara konyoku ha yamerarenai (That’s Why I Never Tire of Mixed Bathing) (Shincho Shinsho, 2008), Rabaul onsen yugekitai (Rabaul Onsen Squadron) (Shinchosha, 2009), Koi ni kiku! Pawa supotto onsen (Good for Romance! Onsen Power Spots) (Bungeishunju, 2010), Ofuro to no no ii hanashi (Nice Tales about Baths and Brains) (Tokyo Shoseki, June 2014), and Shiragiku: densetsu no hanabishi Kase Seiji ga sasageta chinkon no hana (White Chrysanthemums: Flowers for the Repose of Souls Offered by the Legendary Pyrotechnician Seiji Kase). Appointed as a Visit Japan Ambassador by the Ministry of Land, Infrastructure, Transport, and Tourism in 2008. Is also an ambassador of Takeo Onsen, a special tourism envoy of Niigata, a member of the Echigo Nagaoka Supporters Club, and a member of the Japan Travel Writers’ Organization. 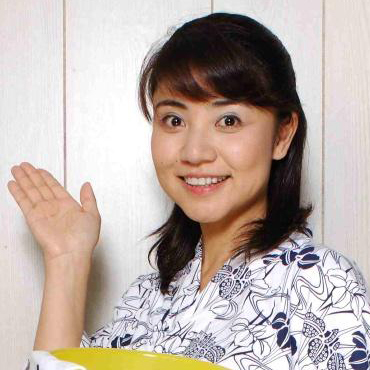