In June 2016 Kyoto Prefecture and seven municipalities in the northern part of the prefecture (the cities of Fukuchiyama, Maizuru, Ayabe, Miyazu, and Kyotango and the towns of Ine-cho and Yosano-cho) established the Umi no Kyoto (Kyoto by the Sea) DMO (Destination Management/Marketing Organization) to promote the formation of a regional brand tourism zone. Facing the Sea of Japan, the northern part of Kyoto Prefecture has been an important link between the continent and Kyoto since ancient times. Furthermore, it is no exaggeration to say that the plentiful food of this region, including marine products, rice, and vegetables, supports the kitchens of Kyoto. This time, introducing the “Kyoto by the sea” region, I place the spotlight especially on the boathouses of Ine Bay and the “close-to-the-sea” lifestyle of the people living there, exploring their attractions and how to enjoy them.

About two hours after leaving Kyoto Station on a JR special express train, I arrived at Amanohashidate Station in the north of Kyoto Prefecture. If I had had time, of course I would have stopped to take a look at the splendid Amanohashidate sandbar, which is one of the three most famous views in Japan. But this time I was only visiting for one night and two days from Tokyo, and my purpose was to enjoy the boathouses of Ine and their lifestyle. So I immediately boarded a local bus, which took me through the city of Miyazu to Ine-cho. Looking through the bus window, I was amazed by the transparency of the water in the bay. After about an hour I arrived at the Hide bus stop at a pier for sightseeing boats going around the bay. First of all, I decided to take the 25-minute pleasure cruise.

In Ineura (Ine Bay area), which was designated by the government in July 2005 as an Important Preservation District for Groups of Traditional Buildings, there are about 230 boathouses (funaya) circling the 5 km bay.

These boathouses are buildings that jut out into the sea of the bay. In most cases the first (ground) floor serves as a boat garage, shed, and workplace and the second floor as living quarters. In recent years many people have ceased working as fishermen, and boathouses have been renovated as lodgings and cafes. They are very popular with tourists. Receiving a squawking welcome from the seagulls, I enjoyed this view of the boathouse scenery from the sea.
≪Video: View of the boathouses from the excursion boat≫

After my boat ride, I went to the Funaya no Sato Ine roadside station, which is perched on top of a small hill overlooking Ine Bay. The observation deck offers a panoramic view of the bay. As I gazed down, I felt just like a seagull myself looking down on the sightseeing boat that I had just been riding.
≪Video: Panoramic view from the observation deck≫

The roadside station has a tourist information office, which offers advice on such things as recommended spots, activities, and reserving tourist guides. It was lunchtime, though, so I went to the Aburaya Japanese restaurant inside the roadside station and had a bowl of fresh seafood on rice, which had been recommended to me by local people. The helping of seafood, mainly local fish, was extremely generous. Ah, the sublime joy of travel! I thoroughly enjoyed this taste of local cuisine.

I stayed overnight at a boathouse lodging called Maruichi. It was a traditional building composition consisting of the boathouse on the sea side, a storehouse with a very historic ambience behind it, and then, over a road on the mountain side, the main house occupied by the owner. The second floor of the boathouse itself was a modern, elegant structure, part-Japanese and part-Western, so non-Japanese travelers would no doubt like it. There was no evening meal, so I ordered a prepared box lunch and sat at the counter table by the window to eat it, along with some local sake. From the window I had a marvelous view of Ine Bay fading into darkness. The owner of the lodging is not a fisherman as such but the captain of a boat for anglers called

the Maruichi-maru. The boat is too big to fit into the first floor of the boathouse. Perhaps for that reason, the interior part of the first floor is used as an eating place with a large table, 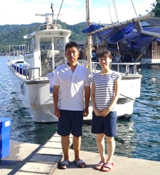 and the outer part on the sea side is a fish preserve. Several large sea bream were leisurely swimming around in it.

The owners Mr. and Ms. Nagahama
and the Maruichi-maru

Morning in the Port

The sea area off Ine is one of the three largest fishing grounds for yellowtail in Japan, along with Himi in Toyama Prefecture and the Goto Retto islands in Nagasaki Prefecture. Moreover, the fishing catch at the ports in Ine-cho accounts for around 25% of the total for Kyoto Prefecture. Despite these facts, though, I was told that there is not a single fishmonger in Ine. Guesthouse owners and housewives in ordinary households go down to the port every morning to buy fish caught in the fixed nets set up outside the bay. (This is known as a beach market or hamauri in Japanese.) Hearing this, I decided to get up early the next morning and go and see for myself.
≪Video: Scene of an Ine fishing port≫
When a fishing boat arrives at the port, a powerful pump is used to suck out the fish from the boat’s well and send them into a large sorting machine. After being divided up by the sorting machine, the fish are checked by human eye and again carefully sorted by hand. It is local women who do the sorting and local women and men who do the buying, but apparently there are also regular customers who, lured by the cheap and fresh fish of Ine’s ports, come every morning from as far away as Nara Prefecture. Because Ine does not have a fish market, most of the catch is quickly transported to markets in Miyazu and Maizuru.
When I was down at the fishing port, I came across 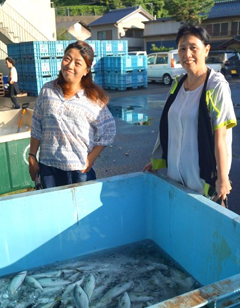 two tourists from Hong Kong, stepsisters Addy Tang and Esther Wan. Their family of four was enjoying sightseeing around Osaka. Having learned about Ine on the Internet, they were staying in a boathouse lodging for one night and had really wanted to see a fishing port. Ms. Wan had visited Japan several times before and said that she liked Hokkaido best of all. “Tokyo is just like Hong Kong,” she said. “Too much hustle and bustle. Ine is lovely because it’s quiet.” She seemed to like this fishing port where time passes so leisurely.

A Stroll around the Town and Float-Making Experience

I asked a local guide to show me around the town. The boathouse structures are all almost the same. The boathouse itself extends over the water, and in most cases there is a storehouse behind it. The walls of the gabled-roof storehouses are adorned with plaster reliefs called kote-e. Often these reliefs display characters, such as those for “treasure,” calling for good fortune, and “water,” a wish for protection from fire. Behind the storehouse there is a road about 4 meters wide, over which, on the mountain side, there is the owner’s main residence. Similar structures line the road on the left and right. 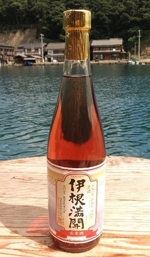 Strolling around this townscape, we came to a sake brewery called Mukai Shuzo, which was founded in 1754. This brewery has a long history of making sake to offer to the gods as a prayer for an abundant fishing catch. In recent years its Ine Mankai sake, brewed using red rice (sometimes called “ancient rice” in Japanese) has proved popular. When I had a taste of this red-rice wine, which is a pinkish color rather like rosé wine, its faint sweet-sour flavor whet my appetite. Like wine, I thought, it would be perfect for drinking before or during a meal. Apparently this red-rice wine, which has been recognized by sommeliers in famous restaurants around the world, is exported and is attracting attention overseas as well.

Feeling a little tipsy after the sake tasting, I continued my stroll around the town. One custom that my guide said I really must not miss was mondori fishing, a symbol of the funaya daily lifestyle. The guide took me round to a boathouse front, on the sea side, and pulled on a rope stretching out into the water. At the end of the rope there was a dome-shaped net cage, inside which there were fish leaping around. This cage-like net for trapping fish is called a mondori. The inedible parts of the caught fish are put back in the net, which is then tossed out into the water to trap fish for the next day’s meals.     ≪Video: mondori fishing≫ 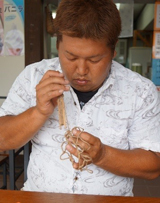 The final stop in my stroll around the town was to experience making a glass fishing float. My instructor was Mr. Keigo Iriyama, who is a fisherman. 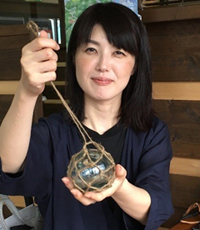 The fishing floats are made by wrapping a glass ball with knitted hemp rope. In the past fishermen used them as buoys. Like when repairing a net, bamboo needles called anbari are used. Almost belying his fisherman’s muscular arms, Mr. Iriyama knitted very nimbly indeed. When I tried, I found it to be actually quite difficult, and the mesh became increasingly uneven. In contrast, the young lady doing the workshop at the same time as me produced a meticulously knitted float. Most ladylike!

As the final activity of my stay in Ine-cho, I wanted to see the boathouses from as close as possible up front, so I decided to take a sea taxi. The sea taxis are small sightseeing charter boats that, if you make a booking, will pick you up anywhere in the bay. A 30-minute pleasure ride in the bay costs \1,000 per adult. Unlike the large sightseeing boats, the sea taxis are small, so they can go nearer the coast. Furthermore, the sea taxi captain will tell stories that interest passengers. My taxi captain also complied with my desire to take photos of the boathouses from close up front.

I was able to obtain some very interesting information from the sea taxi captain too. For example, he told me that the designation as an Important Preservation District for Groups of Traditional Buildings covered not only the buildings themselves but also the mountains behind the boathouses. Also, the boathouses do not suffer typhoon damage because the entrance to Ine Bay faces south, the Sea of Japan side is shielded by mountains, and at the entrance to the bay there is an island called Aoshima, which serves as a breakwater. The tidal range is 5–10 cm a day and 50 cm a year at the most, so the surface of the water in the bay is always still, just like a mirror. And it was only after the Edo period (1603–1868) that the boathouses came to be built near the water, as they are now. Until around 1930–31 the road between the main residences and the boathouses was only 1.5 m wide. Since there was not enough room for vehicles to pass, the only means of transportation at that time was by boat. The road was eventually widened between 1931 and 1940, after which the boathouses, which until then had only one floor, became two-floor structures. In terms of learning about the town’s history, it was a very useful commentary indeed.

While listening to the fascinating talk by the sea taxi captain, I took many close-up photos of the boathouses before returning to Tokyo fully satisfied with my trip. Next time, I really must stay longer!

The roofs of the old boathouses incline down toward the water.
The one on the left is an old boathouse dating from the Edo period; the one in the center is the newest.