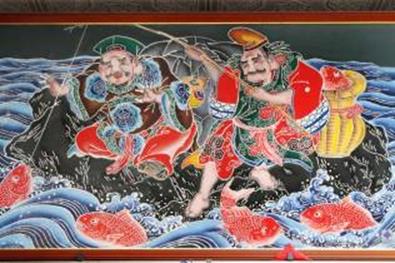 The fishing industry has long flourished along the coast of the Boso Peninsula in Chiba Prefecture. During the Edo period (1603–1868) the culture of maiwai (festive kimonos to celebrate a good catch) developed among the fishermen who lived by the sea in this area. In this article, IHCSA Café talks with Mr. Kosuke Suzuki, the third-generation owner of Suzusen, who inherited the tradition and technique of maiwai dyeing from his grandfather’s generation.

◆ Please tell us about the history of maiwai. 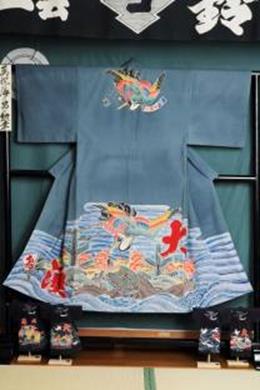 Originally maiwai meant just celebrating a good catch, but over time it came to mean the kimonos that ship owners would distribute to fishermen for thecelebration of an especially good catch. Actually it was not kimonos but cloth that was distributed, and the fishermen’s wives used to make this cloth into long or short kimonos. Then everyone would wear the same kimono for the celebration.
The Boso Peninsula in Chiba Prefecture is said to have been the birthplace of maiwai. From there the custom spread along the Pacific coast from Aomori to Shizuoka. According to literature, there seems to already have been a custom of making maiwai around 1800, but then in the 1950s and 1960s the practice of distributing and wearing maiwai at times of a good catch died out. As times changed, the reward for a good catch shifted to more practical items, such as jumpers, and cash bonuses.

◆What made you follow this path as your career?

I grew up watching my grandfather and father engaged in dyeing, but I was good at mathematics and physics and went on to study chemistry at university. For a time I thought of becoming a teacher. However, I liked the masculine flamboyance of the maiwai, like the Edo-period firefighters’ costumes, and gradually I came to want to do the dyeing myself. So after graduating from university, I decided to devote myself to continuing the family business. 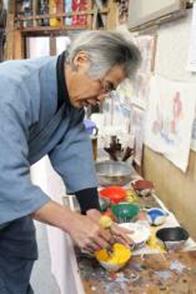 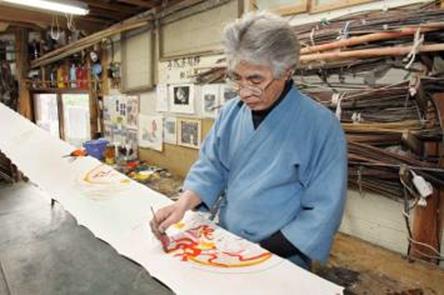 ◆ Please tell us about the attractions of maiwai. 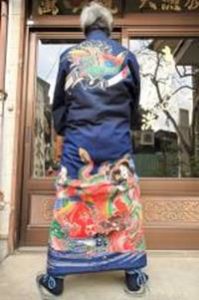 Usually the patterns of the maiwai are drawn on the back and lower part. The family crest, ship’s insignia, and ship’s name are put on the back, and such things as auspicious motifs, like a crane and tortoise, pine tree, or treasure boat, or the fish that was caught in abundance are drawn on the bottom. In coloring, you mix squeezed soybean juice into five primary colors and then apply each color using a paint brush. A three-dimensional sense is created by shading off the borders between the colors to add gradation. When the fishermen wore the maiwai dyed in this way, the patterns drawn on the back and lower part stood out strongly, so they were able to boast to people around them of their bountiful catch. I think this masculine splendor is the attraction of maiwai.

◆ How has maiwai dyeing been preserved since the Edo period?

My grandfather trained in a dyeing factory that had continued since the Edo period and then founded the Suzuki Somemonoten in 1925. Almost all of the old materials had been lost at the time of the Great Kanto Earthquake in 1923, but the dyeing technique was unfailingly handed down from my grandfather to my father and then to me. Unfortunately there is no artisan to inherit the maiwai dyeing technique as the fourth-generation owner of Suzusen, but we are making efforts to transmit the method to the next generation. Since about 10 years ago, for example, we have been holding dyeing workshops for local students and others in our studio and museum.

◆ How long does it take to master the technique?

There are 12 processes involved in preparing a single cloth, such as compiling the pattern on paper, coloring, and ground dyeing, so it takes around 10 years before you are able to do the whole procedure. The demand for maiwai is declining, but when I see people happily wearing kimono that I have made or carefully displaying kimonos that I have helped repair or reproduce in their museums or somewhere, I feel glad that I chose to become a craftsman. 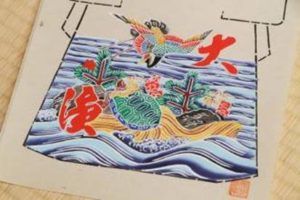 ◆ Please tell us about your activities and objectives from now on.

So far I have only been involved in making long or short kimonos, but now I am also applying the maiwai technique for making more familiar items, such as aloha shirts, hats, and bags. In the future I would like to see these products become popular among foreigners. 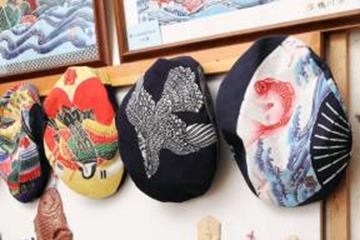 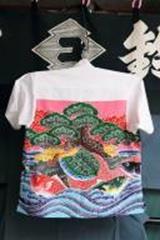 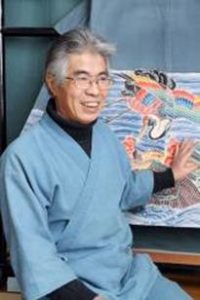 
Born in Kamogawa, Chiba Prefecture, in 1954. After graduating from the Faculty of Science and Technology at the Tokyo University of Science, became the third-generation owner of the family business specializing in maiwai dyeing. In 1997 maiwai became a designed traditional craft product of Chiba Prefecture. His hobby is acquiring qualifications (level 1 coloring license, cleaning license, hazardous materials officer license, boiler engineer license, etc.).