Following the relocation of Japan’s capital from Kyoto to Tokyo in 1869, the industry of Kyoto, which had served as the capital for more than a millennium from the era in which it was known as Heiankyo, suffered a rapid decline, and its population fell as well. The local government therefore launched the Lake Biwa Canal Project with the aim of restoring Kyoto’s prosperity. This project, which envisioned channeling water from Lake Biwa to Kyoto in order to boost waterway transportation and use the water for such purposes as waterwheels, irrigation, and fire-fighting, also later led to the operation of Japan’s first hydroelectric power generator and developed into water-supply services essential for the subsequent population growth and industrial development of the city. Moreover, since the project paid consideration to the preservation of Kyoto’s environment, the waterside scenery created by the canal further enhanced the city’s attractions. Let us take a look at the history of Lake Biwa Canal and some popular walking routes along the canal’s course. 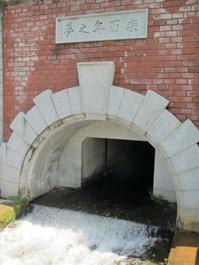 Kunimichi Kitagaki, who was appointed governor of Kyoto Prefecture in February 1881, devised a plan for the Lake Biwa Canal Project, by which water would be channeled from Lake Biwa to Kyoto and utilized for the city’s industrial development. At that time the design and supervision of large-scale infrastructure works in Japan were entrusted to foreign engineers, but for this project Kitagaki chose Sakuro Tanabe, who had only recently graduated from the Imperial College of Engineering (the present-day University of Tokyo). The Lake Biwa Canal Project therefore became the first large-scale civil engineering project undertaken in Japan with a Japanese engineer in charge and most materials procured domestically.

Work on Lake Biwa Canal No. 1, up to the Kamogawa river junction, was started in June 1885 and completed in March 1890. The original schedule was to use the water for such purposes as waterway transportation, waterwheels, irrigation, and fire-fighting, but midway through the construction it was decided also to use the water for hydroelectric power generation, which had been successfully developed in the United States. This elaboration of the project led to the opening of Japan’s first electric-powered streetcar service in Kyoto in 1895. 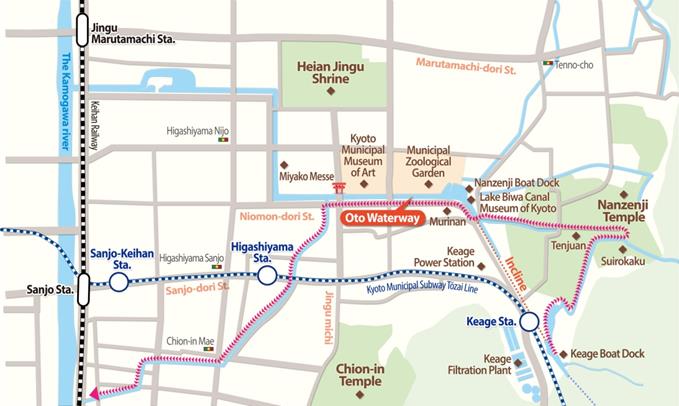 Work on Lake Biwa Canal No. 2 was started in October 1908 and completed in March 1912. The second canal was built with the purposes of securing drinking water, which had become both a quantitative and qualitative problem in the wake of Kyoto’s modernization, and increasing hydroelectric power generation. The Keage Filtration Plant, which employed the rapid filtration method for the first time in Japan, commenced the supply of water in 1912.

From Keage Boat Dock and the Incline to Suirokaku Aqueduct

Lake Biwa Canals No. 1 and 2 meet at Keage Boat Dock. When the canals were used for waterway transportation, boats that had come down the first canal from Lake Biwa would unload their freight here. 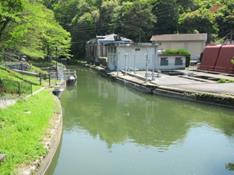 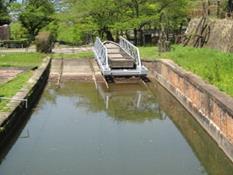 Boats were lifted onto a bogie to navigate the Incline. 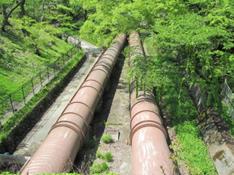 Some water is channeled through water-pressure pipes to the power generation station.

The Incline was a kind of cable car for carrying boats between Keage Boat Dock and Nanzen-ji Boat Dock. It was necessary because there is a 36-meter difference in elevation between these two points. The Incline ceased operating in 1948, following the decline of waterway transportation, but it is still preserved in its original form. Both sides are lined with cherry trees, so it has become a popular spot for cherry-blossom viewing. 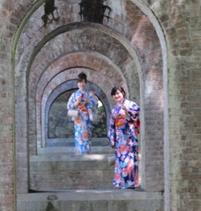 Ideal for snapshots in kimono!

Walking along the canal branch from Keage Boat Dock, eventually you come out on top of Suirokaku Aqueduct in the precincts of Nanzen-ji temple. Although this brick structure is said to have been built so as not to destroy the historic scenery of Nanzen-ji, it is a completely foreign style of architecture, so one can imagine how amazed people must have been looking up at it in the early days. Having said that, though, today, partly covered by moss, it cuts a very dignified figure and is always crowded with people drawing sketches or taking photos. 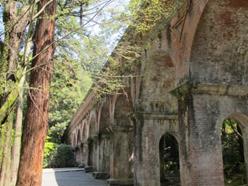 The aqueduct creates an original kind of scenic beauty. 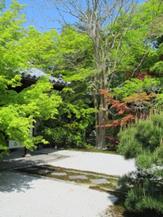 The rock garden in front of Tenjuan’s main hall

Tenjuan, which is dedicated to the Zen priest Daimyokokushi, the founder of Nanzen-ji, is one of the most historic subtemples in the Nanzen-ji complex. In particular, its two gardens of differing styles are splendid. In front of the main hall there is a flat and simple rock garden, and to the south of the study there is a thickly forested pond garden that draws water from the canal. 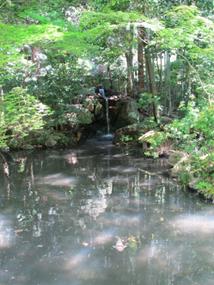 The pond to the south of Tenjuan’s study uses canal water.

Like Tenjuan, which is an example of a temple making use of the canal water, the garden of Murinan, a villa near Nanzen-ji Boat Dock that belonged to the politician Aritomo Yamagata (1838–1922), who twice served as prime minister in the early Meiji period, also pulls water from the canal. Unlike Tenjuan, the Murinan garden is a bright and open pond garden with no trees to block the view of the Higashiyama hills in the background. 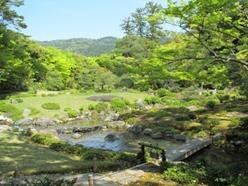 The spacious Murinan garden with the Higashiyama hills in the background.

In this way, some of the water of Lake Biwa Canal is being used in temple and villa gardens to create soothing environments.

From Oto Waterway to Shirakawa Branch

The section of the canal called the Oto Waterway, which is formed where the Lake Biwa Canal meets the Shirakawa river at Nanzen-ji Boat Dock, flows west past such tourist sites as Kyoto City Zoo, Kyoto Municipal Museum of Art, the gate of Heian Jingu Shrine, and Miyako Messe exhibition hall. Strolling along the promenade lined with cherry trees is very pleasant indeed. In the cherry-blossom season, views of the blossoms on both banks can also be enjoyed from aboard one of the Jikkokubune pleasures boats plying the waterway. (The Jikkokubune boats operate only from March until the beginning of May.)

From just beyond Jingu-michi street, the Shirakawa river separates from the canal. Lined with willow trees and seeming to flow almost at eye level, the Shirakawa is a soothing sight for travelers tired after all that walking. Maybe because the Shirakawa is so gentle and narrow, and the water so clean, there are almost no fences or guardrails along the way. This absence of barriers seems to foster an intimate relationship between people and the river. 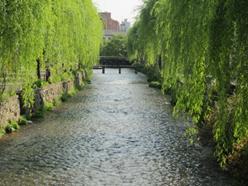 The Shirakawa flows south through the residential area of Higashiyama Sanjo, turns west in front of Chion-in temple, and then gives ambience to the geisha district of Gion before flowing into the Kamogawa river. 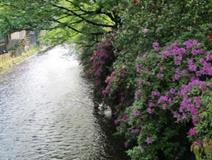 Although the uses of Lake Biwa Canal, completed in the Meiji period, have changed over the times, especially following the decline of waterway transportation, it still supplies almost 100% of Kyoto’s tap water even today, and the waterside scenery along the canal continues to offer relaxation to residents and sightseers.