When we think of bullfighting, we immediately picture the scene of a matador in Spain waving a red cape in front of a bull to excite it and prompt an attack. What is less well known is the fact that bullfighting has also taken place since olden times in various parts of Japan, albeit in a style differing from that of other countries. Since bullfighting in Japan involves two bulls locking horns, it is also called ushitsuki (bull locking) or ushizumo (bull sumo). Rules differ a little from district to district, but usually there is no limit to fighting time, and the bull that loses the will to keep on fighting and runs away is the loser. At the tournaments, bull handlers (seko) are on hand to control the bulls and steer them to victory. Recently I visited the city of Uwajima in southwestern Ehime Prefecture to find out more about these handlers and the daily life of the fighting bulls, as well as to watch the spring Uwajima Regular Bullfighting Tournament, which was held on April 7, 2019. 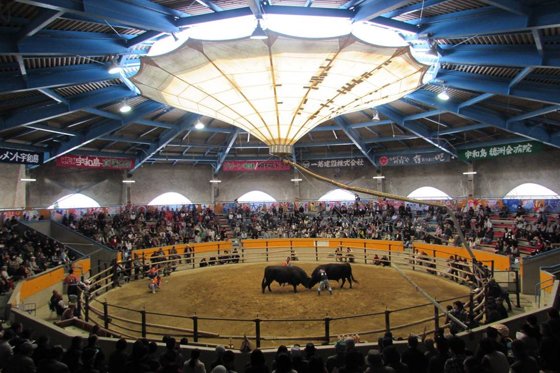 Generally speaking, there are two theories about the origins of bullfighting in the Nanyo region, which includes Uwajima. One is that the origins lie way back in the Kamakura period (1185–1333), when farming folk saw bulls used for farm work naturally locking horns and thought it would make a good form of amusement. The other has it that in the latter half of the seventeenth century local fishermen rescued a Dutch ship drifting in the Uwakai Sea, and the two bulls that were presented to them as a token of gratitude started wrestling each other. A historical document relates that full-fledged bullfighting in a ring was taking place at the beginning of the nineteenth century.
Today the Uwajima Regular Bullfighting Tournament takes place five times a year and has become a well-entrenched amusement event for the local people. Let me tell you about the spring tournament held on April 7. The bullfighting arena is a splendid dome-shaped building situated atop a hill and reached in about five minutes by bus from JR Uwajima Station. (There is a free shuttle bus service.) In the middle of the arena there is a bullring with a diameter of 20 meters. Around the ring there are tiered spectator seats with a capacity of about 1,600 people. The large number of families attending was testimony to the popularity of bullfighting among the locals.
At the opening, the Ozu Yosakoi Rarirurero Troupe, consisting of a group of vivacious senior high school girls, added gaiety to the atmosphere with a spirited dancing performance.

Like sumo wrestlers, the bulls are given ranks—from maegashira to yokozuna (grand champion)—and take on bulls of the same rank. A maegashira on the East side fights a maegashira on the West side, and an ozeki (second highest ranking) on the East fights an ozeki on the West. And again like sumo wrestlers, the high-ranking bulls sport colorful aprons.
The bulls are led from the East and West waiting areas to the ring by the bull owners, who make stirring battle cries as they appear. The spectators respond with boisterous cheering. When a bull enters the ring, it rubs its body against the ground to transfer its smell and claim the territory as its own. It threatens the opposing bull by scratching the ground with its forelegs. The excited bulls are already in full fighting mode.
The contest begins the moment the bulls lock horns. The clanking sound of the clashing horns rings throughout the arena. The voices of the handlers shouting “Go!” and children crying “Come on!” reverberate. The rising crescendo is just like that of a sumo bout. 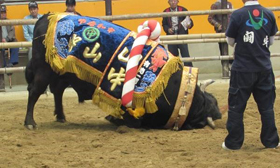 A bull rubs its body against the ground and transfers its odor to show whose territory it is. 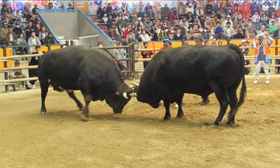 The contest begins with the bulls locking horns.

The emcee-cum-running commentator helps to enliven the contests. This role is filled at every tournament by Mr. Kenji Sakamoto, a member of staff in charge of bullfighting at the Uwajima Tourism and Local Products Association and a leading authority in the field of bullfighting research in Uwajima He also explains the rules and techniques of Uwajima bullfighting in an easy-to-understand way to people who are seeing it for the first time.
There are 10 basic techniques in Uwajima bullfighting, including the basic technique of oshi (head-to-head pushing), in which the bulls strenuously push each other in the ring, and hira (side butt), in which, during the bout, a bull, spotting an opponent’s unguarded moment, attacks the other bull’s neck and foreleg joints from the side. The bout that I was watching was decided by a technique called yorikomi (backward drive), in which a bull suddenly pushes the opponent back against the fence. Overwhelmed, the opposing bull was defeated, having lost any desire to fight back.
Both bulls receive money for participating in the bout, but the unique feature of Uwajima bullfighting is that the loser is given more than the winner. The rule is that 40% goes to the winner and 60% to the loser. This is a gesture of thoughtfulness to the owner of the losing bull. Since the losing bull has been injured both mentally and physically, the remuneration includes condolence money. It is a nice little tradition typical of Uwajima. 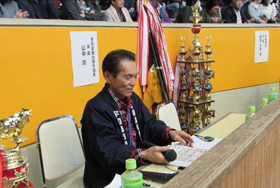 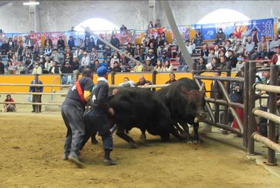 In the technique called yorikomi (backward drive), one bull pushes the other against the fence.

The Dangerous Life of a Handler

The contests in Uwajima bullfighting in principle feature one handler per bull. Since the dangerous work requires physical strength and concentration, handlers are substituted several times during a bout. They fulfill a very important role and greatly influence the outcome of matches. There were 19 handlers taking part in the spring tournament.
”At present there are 20 handlers in Uwajima,” explained Mr. Masashi Mitsubiki, the younger brother of a bull owner who has been a bull handler for 30 years, “but few people are willing to do the job, so the number is dwindling year by year. Once a bull stood on my foot, and I broke three toes.” I asked Mr. Mitsubiki about his motivation in becoming a bull handler, a job in which just one wrong step can lead to a serious injury, and the highlight of the work. “From my childhood I was brought up in an environment with bulls around me, so it just happened naturally. As for the highlight,” he replied, smiling. “it’s that moment when a bull wins thanks to my guidance.” His eyes gleamed with pride and affection for the bulls. 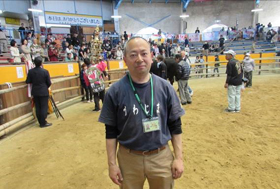 Mr. Masashi Mitsubiki has been a seko (bull handler) for 30 years. 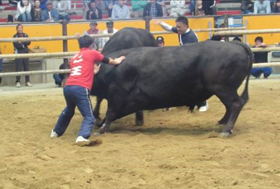 What kind of days do the fighting bulls normally spend? The day after the tournament, I visited the bull shed of Mr. Hitoshi Yamanaka, a bull owner and chairman of the Uwajima sight-seeing Bullfighting Association. The bulls, tied to long horizontal bamboo posts by muzzle ropes, were standing peacefully outside. It was hard to imagine that just the day before, they had been fighting so fiercely. They are tied to the posts for about six hours, from nine in the morning until three in the afternoon. Making them stand in this way strengthens their legs and flanks. Standing is one of their routine exercises. 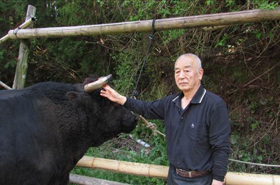 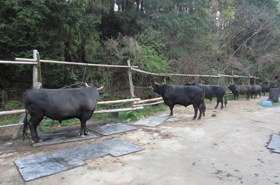 Bulls the day after the tournament

Twice a day, at about seven in the morning and half past three in the afternoon, the bulls are fed hay, wheat, corn, and so on in the well-kept shed. Sometimes they are given tea or beer to drink, and as a tournament approaches, apparently they are fed garlic as well. Mr. Yamanaka takes much care of the bulls’ condition and nutritional management, giving them nutritional supplements when they seem to need them.

A shed where the bulls rest

Feed for the bulls: hay (left) and wheat

Like sumo wrestlers, as a tournament looms, it is necessary for the bulls to strengthen their necks, shoulders, legs, and flanks. About six weeks before a tournament, full-scale training begins. The hill behind the shed provides a natural training ground, with the side of the hill having been shaved to create a perpendicular wall of earth. The bulls toughen their whole bodies by banging into the wall and digging holes in it. In addition, the bulls practice with tires placed in front of the shed, tossing them up with their horns as if they were the opponent. Incidentally, the characteristic of strong fighting bulls apparently is their low back and short legs. 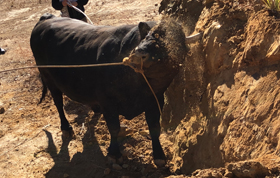 Bulls bang into the hilly slope to toughen their whole bodies. 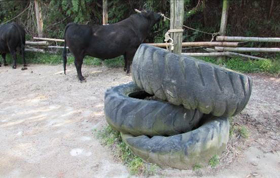 Finally, I asked Mr. Yamanaka about the outlook for Uwajima bullfighting. “In order to continue Uwajima bullfighting, which is a traditional culture of Uwajima, it is necessary to increase the number of both bull owners and fighting bulls,” he replied. “The raising of fighting bulls takes a lot of time and money. As one means of enabling stable management, I think we should make good use of the owner system.”
The people whom I met on this trip had an enormous affection for the bulls. The bull owners in particular seem to raise them as if they are their own children. I felt that there was a relationship of mutual trust between the owners and the bulls that only they themselves can understand. 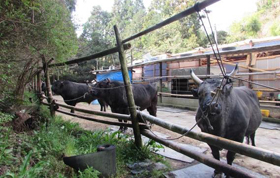 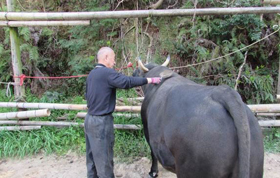