Heroes of the Tales

In 1400 Zeami (1363–1443), who perfected the dramatic form of Noh, penned a treatise on Noh titled Fushi Kaden (The Transmission of the Flower of Acting Style). In this treatise, Zeami wrote about methods of practice, mental attitude, acting, and direction in Noh. The work is full of abstract expressions, as typified by the assertion that “If you keep it secret, it will be a flower,” and even today various books and articles are published about it as a philosophical discourse on the performing arts or as a tract on the unique spirit behind Japanese culture.
Furthermore, about 250 plays written by Zeami continue to be performed to this day as the classical repertoire of Noh. Depending on the role of the shite (main actor), these plays can be divided into five genres: deity, male, female, madwoman, and devil. In the past, a Noh performance consisted of one play each from all five of these genres interspersed with comical Kyogen skits to provide some light relief. 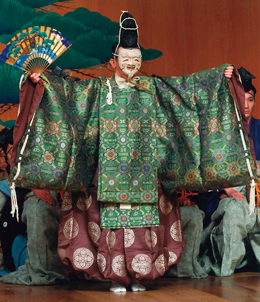 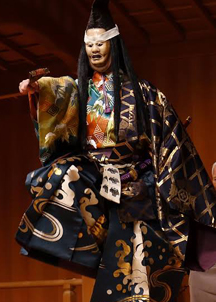 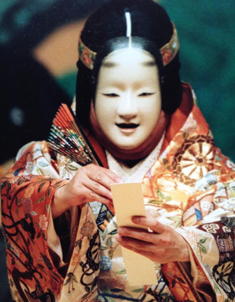 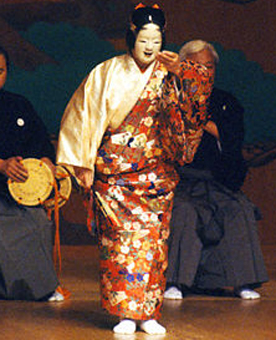 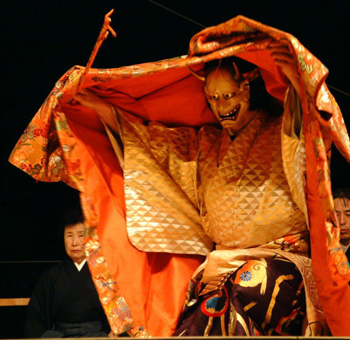 In the deity genre, the main actor plays a dignified old man—an incarnation of a deity—who promises peace, happiness, and a bountiful harvest. In the male genre, he plays the spirit of a warrior who, due to agonizing memories of battle, is unable to ascend to heaven after death and appears in this world in search of salvation. This type of play includes fighting scenes. In the female genre, the hero is the ghost of a beautiful woman whose spirit floats in this world after death due to her deep feelings of love, or a celestial maiden dressed in a gorgeous costume whose elegant dance is the highlight of the play. In the madwoman genre, the main actor plays a woman who is agonizing about something, such as a mother tormented and crazed by the loss of her child. And lastly, in the devil genre, the main actor plays a fictitious monster, such as a long-nosed goblin or dragon, which, for good or bad, has phenomenal powers way beyond the abilities of humans.

Let me introduce a play in the female genre that unfolds against the background of some world-famous scenery. 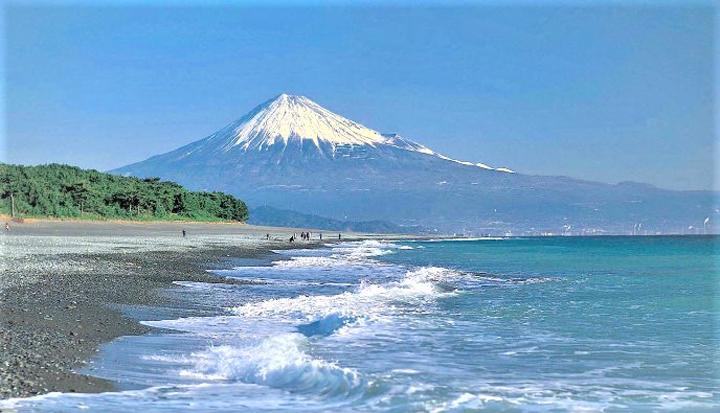 The pine grove of Miho in Shizuoka Prefecture comprises about 30,000 pine trees growing along a coastline of about seven kilometers. Against the background of the majestic Mount Fuji, a symbol of Japan, the scene of the trees, blue sea, and white-crested waves has provided inspiration for poems and paintings since olden days. One of these works is Hagoromo, which features a celestial maiden as the hero and has been described as the most beautiful Noh play. Mount Fuji and the pine grove of Miho are listed as UNESCO Cultural Heritage sites, and Noh also was registered as a UNESCO Intangible Cultural Heritage in 2008, so it is a perfect “UNESCO Cultural Heritage” combination.

Synopsis of Hagoromo
One spring morning a fisherman called Hakuryu happens to find a beautiful feather robe hanging on the branch of a pine tree. When he tries to take it home as a family heirloom, a celestial maiden appears and asks him to return the robe. At first Hakuryu refuses to return it, but then he is moved by the pitiful sight of the celestial maiden, who laments that without the robe she cannot return to heaven. Hakuryu agrees to give back the robe in return for seeing her perform a celestial dance. The celestial maiden puts on the robe and performs a dance, which describes the Palace of the Moon. Praising the beauty of the Miho pine grove, she continues to dance, eventually rising above Mount Fuji in the background and disappearing into the haze. 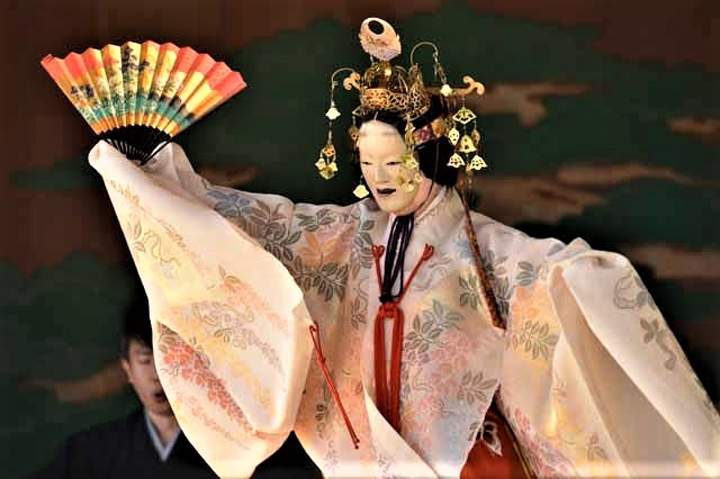 Maybe because humans down here on Earth so much admire the purity, grace, and virtue of the celestial maiden, this has been the most loved and performed Noh play from olden days right up to the present. 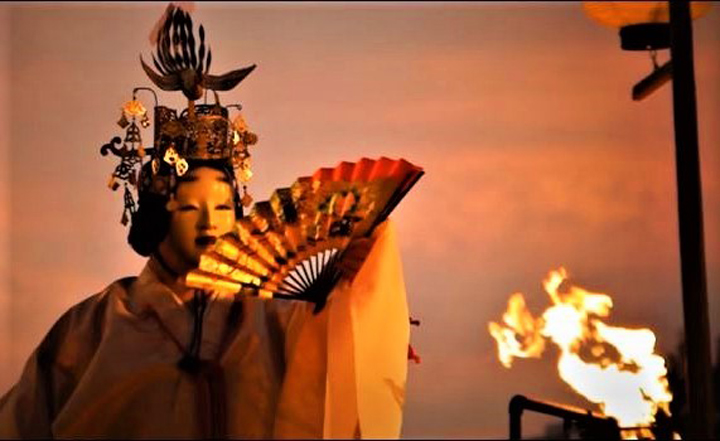 Noh is performed not only on the standard indoor stage but also outdoors by the light of bonfires. This style is called Takigi Noh. You can watch a performance of Hagoromo, staged amid the fantastic light of evening, on YouTube:
https://www.youtube.com/watch?v=66TLQ5d8Ji8

At the time when she was chosen for the Miss Japan Grand Prix award in 1986, Mami Nakamura was a student researching the “spiritual characteristic of the Japanese as seen in the Hagoromo legend.” After her graduation, Nakamura became a Japanese-style painter. She does the cover illustrations for the monthly magazine Budo (Martial Arts) on the theme of “transmitting the Japanese soul.” Nakamura painted this picture for the January 2020 issue of the magazine. It depicts the celestial maiden returning to heaven while bidding a fond farewell to the beautiful pine grove of Miho. In the background, a manly Mount Fuji, a symbol of Japan, sees her off. Nakamura’s official site can be viewed at https://maminoe.jp/ (Japanese site only). 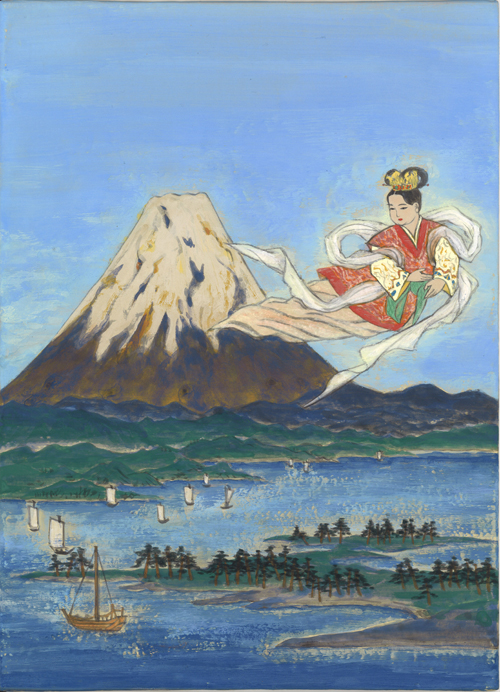 Hagoromo has many passionate fans not only among the Japanese but overseas as well. The French dancer Helene Giuglaris came to know about the Hagoromo dance through her research aimed at taking her dance to a higher level. Interpreting and arranging the work in her own way, she performed the dance in 1949. The first performance in the hall of the Guimet Museum was a huge success, and she went on to do shows elsewhere. Three months later, however, she collapsed on stage while still dressed in the Hagoromo costume. She passed away two years later at the young age of 35, without realizing her long-cherished desire to visit the Miho pine grove. 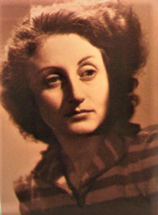 Two years later, in accordance with her dying wish for him to visit Miho in her stead, her husband, Marcel Giuglaris, visited Japan, bringing with him a lock of her hair and a handmade costume. Moved by the event, the local city of Shimizu (now Shizuoka City) conducted a fundraising campaign and, with the cooperation of many people, erected a monument in memory of Helene (the Hagoromo Monument) in the following year, 1952. Her lock of hair was placed under the monument. 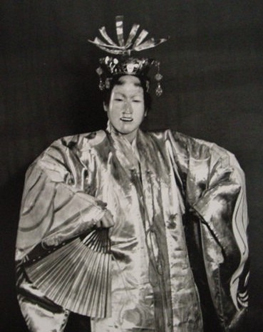 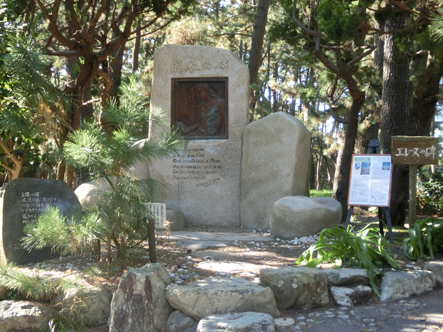 Monument to Helene Giuglaris (from Wikipedia)

The monument to Helene is inscribed with a six-line poem in French that Marcel Giuglaris dedicated to his deceased wife:
Le vent des vagues     The sound of the waves
De la plage de Miho     Breaking on the Miho shore
Parle de celle dont à Paris,  Recalls those years in Paris
Hagoromo a emporte la vie.  Devoted to the Hagoromo dance
En l’écoutant mes jours    Hearing that sound every day
Pourront s’énfuir.      Brings peace and serenity
H. Marcel Giuglaris
As an international journalist, Marcel Giuglaris later did much to promote Japanese-French cultural exchange, including the introduction of French films in Japan and the screening of Japanese films at the Cannes Film Festival.

Next, let me introduce a representative play in the male category.

Six hundred years ago Zeami penned a heroic tale taken from the Heike monogatari (The Tale of the Heike), which is thought to have been written more than 120 years before then.

Synopsis of Yashima
A retinue of monks who had traveled from the capital in Kyoto to Shikoku visits the shore of Yashima, where the Minamoto and Taira clans had fought a battle in 1185. As twilight falls, they meet an old fisherman. One monk asks him to provide overnight lodging in his home. Because he lives in a shabby hut, the old man at first refuses the request. When he hears that the monks had traveled from the capital, however, he feels nostalgic for Kyoto and accepts the request. Encouraged by the monk, the old man begins to talk about the past battle of Yashima and describes the bravery of the warrior Yoshitsune vividly, as if he had actually witnessed it himself. Growing suspicious, the monk asks the old man’s name. The old man implies that he is the ghost of Yoshitsune and disappears. Then, during the night, the ghost of Yoshitsune appears dressed in armor and wearing a helmet. The ghost describes how he carelessly lost his bow in the battle of Yashima but, risking his life to save his reputation, managed to retrieve it in full view of the enemy. As the ghost goes on to describe the terrible Buddhist realm of asura, where fighting rages all the time, dawn breaks, the monk awakens from his dream, and the ghost disappears amid the white waves, the cries of seagulls, and the blowing wind. 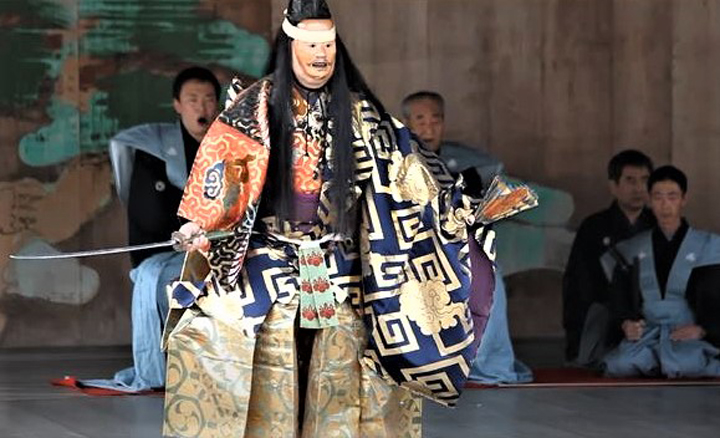 The hero of this play, Yoshitsune (1159–89), was the younger brother of Minamoto no Yoritomo (1147–99), the founder in around 1185 of the Kamakura shogunate, the first warrior government in Japan. Yoshitsune was a tragic warrior who, clashing with his elder brother, suffered a violent death. The play can be watched on YouTube at  https://www.youtube.com/watch?v=O_c1gokp68U&t=81s

Yoshitsune, who was known in his childhood as Ushiwakamaru, appears in many works and is the subject of numerous anecdotes. It is said, for example, that he learned the art of fighting from a long-nosed goblin. The following site shows outdoor Noh performed at Heian Jingu Shrine in Kyoto. Please also see the second video titled “Tragic Hero: The Life of Minamoto no Yoshitsune.” The play Kurama Tengu (Long-nosed Goblin in Kurama) opens with Ushiwakamaru and his friends going to Mount Kurama to see the cherry blossoms and meeting a long-nosed goblin. Many children appear in this play. You can also see five other works in which the main actor plays Yoshitsune: Hashi Benkei (Benkei on the Bridge), Gio, Eboshi-ori, Funa-Benkei (Benkei in a Boat), and Shozon.
https://www.discoverkyoto.com/event-calendar/june/takigi-noh-heian-shrine/

Since its listing as a UNESCO Intangible Cultural Heritage in 2008, as the world’s oldest performing art, Noh has received an increasing number of invitations to give overseas performances. This is to be welcomed, of course. But it should also be remembered that indigenous culture is formed by a country’s natural climate and folk history. Hopefully this page will serve to further deepen interest in Japan.