A Utopian City Built from a Desire for Peace 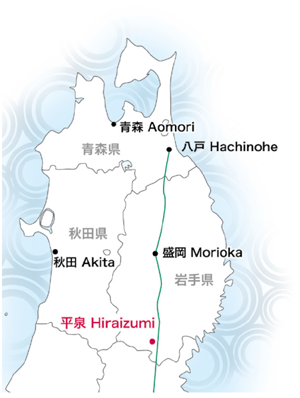 Oshu Hiraizumi, which once boasted a sparkling prosperity on a par with that of Kyoto, is situated in the southern part of Iwate Prefecture. Today, a peaceful rural landscape spreads out on a plain surrounded by verdant hills and traversed by the gently flowing Kitakami River. In the past, though, this was the site of a large city with a population of 100,000 people. Visitors to this district are sure to wonder what kind of people passed through the town at that time and what kind of lives the citizens lived. So let us now introduce Hiraizumi, the capital of Oshu and the historical stage for four generations of the powerful Oshu Fujiwara family. (Oshu refers to the northeastern part of Honshu, Japan’s main island.)

The Foundation of Hiraizumi Culture
About 900 years ago, in the latter part of the Heian period (794–1185), a culture blossomed in Japan under the Oshu Fujiwara family. That was Hiraizumi culture.
At the end of the eleventh century Oshu Fujiwara Kiyohira set up his base in this area. Since his childhood Kiyohira had survived many battles and skirmishes. He had witnessed fighting between relatives, and his wife and children had been killed. Having experienced this unfortunate and gruesome destiny, Kiyohira understood the preciousness of life and devoted his efforts to building a peaceful society without war—in other words, a utopian Buddhist city that replicated the Pure Land. This ideal was carried on by the generations of his son Motohira, grandson Hidehira, and great-grandson Yasuhira, and for about a century, while being influenced by Kyoto culture, Hiraizumi developed its own indigenous culture against the background of trade extending over a wide area.

Reason for Being Called the “Capital of Oshu”
The Oshu Fujiwara family envisioned building the Pure Land of Buddha in the real world. Hiraizumi gradually took shape under the four lords as they constructed several temples to cleanse the city and made use of the surrounding mountains and rivers as background scenery.
Although Oshu was situated a long way away from Kyoto, Hiraizumi achieved remarkable economic and cultural development thanks to its abundant supply of good-quality gold dust, its production of silk, lacquer, horses, and other items, and the lively trade that flourished as a result of the city’s prime position on water and land transportation routes. Viewing the temple architecture, such as the Konjikido (Golden Hall) at Chusonji temple, and the Heian art that remain today, one can glimpse traces of Hiraizumi’s capital-like prosperity of the past, when many people and goods from both Japan and overseas passed through the city and cultural exchange was lively. Chusonji and Motsuji temples are good places to see these vestiges of a glorious past.

Chusonji: A Treasury of Heian Art
Chusonji temple is situated in the surrounding hills to the north of central Hiraizumi. Belonging to the Tendai sect of Buddhism, the headquarters of which is Enryakuji temple on Mount Hiei in Kyoto, Chusonji is said to have been founded in 850 by the Buddhist priest Ennin (given the posthumous title of Jikaku Daishi). At the beginning of the twelfth century Oshu Fujiwara Kiyohira further built it as a temple for the repose of the souls of the many people, both friend and foe, who had lost their lives in battles over Oshu and to guide them to the Pure Land.
Climbing the cedar-lined approach to the temple, known as Tsukimizaka (Moon-Viewing Slope), you can see the main building of Chusonji on the right. When you go a little farther, you come to the Sankozo museum on the left. This museum houses more than 3,000 national treasures and important cultural properties, including Buddhist art from the latter part of the Heian period.

Konjikido: Only Building Remaining in Original State
Among the buildings in the precincts of Chusonji, the one that stands out is the Konjikido (Golden Hall), which was constructed by Oshu Fujiwara Kiyohira in 1124. Today, to protect it from the elements, the Konjikido is covered by an outer structure erected in 1968. The gold-leaf decorating the inside and outside of the Konjikido emanates an almost divine brilliance. The hall is quite small, measuring just 5.5 meters square, but its majestic presence is overwhelming. It is an unusual hall featuring several different Buddhist statues, including the principal image of Amida Buddha, and decorated with craftsmanship that brings together the essence of Hiraizumi culture. The Konjikido is also a mausoleum for the mummified bodies of the first- to third-generation lords of the Oshu Fujiwara family (Kiyohira, Motohira, and Hidehira) and the decapitated head of the fourth-generation lord Yasuhira.
Next, let’s visit Motsuji temple, one of the representative temples of Hiraizumi and famous for having the oldest Pure Land Garden still existing in Japan.

Motsuji: The Oldest Pure Land Garden in Japan
The beautiful Pure Land Garden at Motsuji temple, which was built by the second-generation lord Motohira and third-generation lord Hidehira, is truly picturesque. Making full use of the surrounding mountains as background scenery, the garden, which expresses the Buddhist Pure Land, has flowers, plants, and trees that give enjoyment throughout the four seasons. As a result of repeated fires, the more than 40 temple buildings at Motsuji have all been burned down, so unfortunately they cannot be seen today. However, the remnants remain in almost perfect condition and are recognized as having enormous cultural value.
In the grounds of Motsuji there is a feeder stream that carries water to the garden’s pond, and every May a festival called the Gokusui no En is held. In a reproduction of an elegant Heian-period pastime, people write short poems while a sake cup floats down the stream. Other traditional events of Hiraizumi are also continued to this day and can be enjoyed throughout the year not only at Motsuji but across the whole city.

Transmitting Dreams into the Future
Hiraizumi culture, which for a century achieved great prosperity and development under the leadership of the Oshu Fujiwara family, came to a close in the era of the fourth-generation lord Yasuhira. The great historical figure who cannot be left out when talking about the fall of the Oshu Fujiwara family is Minamoto no Yoshitsune, whose elder brother, Minamoto no Yoritomo, was the first shogun of the warrior government in Kamakura. Hounded by Yoritomo, Yoshitsune received protection from Hidehira in Hiraizumi but lost that support when Hidehira died. Betrayed by Hidehira’s successor, Yasuhira, Yoshitsune committed suicide in Hiraizumi. Nevertheless, still fearful of the Oshu Fujiwara family’s power, Yoritomo sent a large army to Hiraizumi on the pretext that the Fujiwaras had given shelter to Yoshitsune, and the once mighty Oshu Fujiwara family was crushed.
After that, Hiraizumi fell into a state of continuous decline and even for a time ruin. Visiting the district 500 years later, the haiku poet Matsuo Basho wrote:

Protected by various people over the ages, however, vestiges of Hiraizumi culture still remain as the city’s cultural heritage, and Chusonji, Motsuji, and surrounding ruins have already been placed on UNESCO’s tentative list of World Heritage Sites. It is hoped that they will be officially registered as world heritage in the near future.