Namikoshi Shiatsu was founded by Tokujiro Namikoshi and then spread from Japan to the world by his son Toru. Today his grandson Takashi is exploring the potential of shiatsu in various fields, such as medicine, sports, and beauty care, with the aim of achieving its further development. We asked Takashi, the third-generation master of Namikoshi Shiatsu, about the history and effects of shiatsu, his current activities aimed at promoting the health of people around the world, and his future goals. 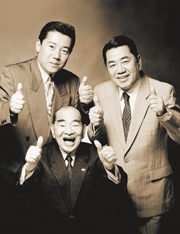 The three generations of Namikoshi Shiatsu

The History of Namikoshi Shiatsu

My grandfather, Tokujiro, was born in Kagawa Prefecture on the island of Shikoku, which has a warm climate. When Tokujiro was six, the family moved to the village of Rusutsu in Hokkaido. Unlike today, at that time the journey from Kagawa Prefecture to Hokkaido was very grueling. Hokkaido was colder than Shikoku as well. His mother began to complain of aches and pains, which began in her knees and then spread to her ankles and wrists and eventually to her whole body.
The five children took turns to stroke and rub their mother’s body in order to relieve the pain. In modern parlance, what she had was probably multiple rheumatism of the joints. But there was no proper hospital in the village, so her only medicine was the compassion of her children. Of the five kids, Tokujiro was especially good. In particular, when he pressed his thumbs from the middle to lower back, the pain apparently was mitigated. Tokujiro didn’t know it, but in medical terminology, what he was probably doing with his fingers was stimulating the adrenal gland to secrete an appropriate amount of cortisone. 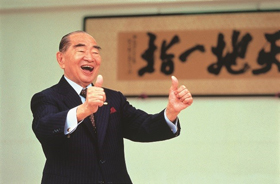 Later my grandfather acquired a license to practice massage, and in 1925 he opened a clinic in Muroran in Hokkaido. That was the first time for the words “shiatsu clinic” to be used. He then opened a clinic in Sapporo, which was very successful, and in 1933, on the recommendation of his older brother, he launched a clinic in Tokyo. In 1955 shiatsu received state approval as a licensed therapy.

My grandfather was good at making people laugh as well. Apparently he often made his mother laugh when she was poorly. And when she laughed, she felt better. Because of that experience, my grandfather believed that laughing has an effect on health, so he tried to promote people’s good health not only through shiatsu but also through laughter. In his later years he appeared on television in comedy and variety shows, and he was popular as a funny old man who laughed a lot. I think the foundation of those unique activities was his desire to promote people’s health through laughter.
My grandfather is famous for having practiced shiatsu on prime ministers, including Shigeru Yoshida, and on Marilyn Monroe when she visited Japan on her honeymoon. One of the many other famous people who my grandfather treated was the world heavyweight champion boxer Muhammad Ali. I love the commemorative photo that was taken of Ali and my grandfather and always carry it around with me. It shows the cheerful and playful personalities of both of them. 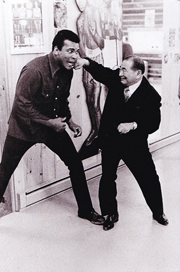 A right punch to Ali's jaw! Tokujiro loved to joke.。

Q. How does shiatsu differ from other manual therapies like amma, massage, and chiropractic? 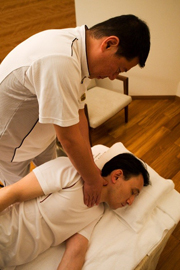 Shiatsu was founded by Tokujiro Namikoshi and is a Japanese manual therapy. In contrast, amma has its origins in ancient China and is a therapy using pressing, kneading, and patting techniques. Massage has its origins in Europe and consists mainly of stroking and rubbing. The principal aim is to improve the circulation of venous blood and lymphfrom the body’s extremities, such as the fingertips, to the heart. Chiropractic is a manual technique founded by the American Daniel David Palmer in the late nineteenth century. The idea behind this therapy is that distortions in the skeletal frame or the spine damage the nervous functions, which in turn cause damage to the body’s tissues and organs. The aim of chiropractic is to treat these illnesses by manually adjusting the distortions.
The big differences between shiatsu and other forms of manual therapy are that shiatsu uses only the hands and fingers and aims to stimulate cells in the whole body by treating the arteries, which send nourishment to the body, from the heart to the body’s extremities.

Q. Your father, Toru, the second-generation master, is said to have disseminated shiatsu from Japan to the world. What exactly did he do? 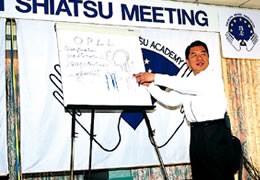 After his graduation from university, my father went to the United States to study at the Palmer College of Chiropractic and elsewhere. He lived in the United States for a total of seven years and became highly proficient in English. After his return to Japan, he served as the principal of a shiatsu school and at the same time endeavored to spread shiatsu to the world, frequently traveling abroad to participate in shiatsu seminars.
Another of my father’s achievements was to systematize shiatsu anatomically and physiologically. More than anything else, my father was proud of the fact that the word “shiatsu” became the only Japanese medical term to be included in the Oxford Dictionary of English.
I mentioned that my grandfather treated many famous people from around the world. Well, my father did likewise. In sports, he contributed to the success of the world flyweight and bantamweight champion boxer Masahiko “Fighting” Harada as his shiatsu trainer, and he also treated the world heavyweight champion George Foreman.
My father devoted himself not only to the systematization of shiatsu but also its application, and he was a pioneer of aesthetic shiatsu, giving instruction to many aestheticians at beauty care schools around the world.

The Effects of Shiatsu

Q: What are the basic principles of shiatsu?

Shiatsu is a therapy in which you use your hands and fingers to press vital points, which have fixed positions in the whole body, and stimulate them with the aim of preventing or treating illnesses. There are said to be 60 trillion cells in the human body. Stimulating them boosts the natural healing power inherent in the human body and promotes good health. 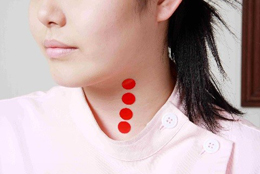 Vital points along the carotid artery 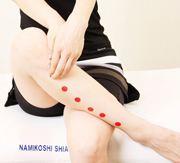 On the basis of modern medicine, vital points have been designated at 660 spots throughout the whole body. The shiatsu practitioner decides which ones and how to press after checking the patient’s muscular and other conditions.

Q: What effects can be expected from shiatsu therapy? 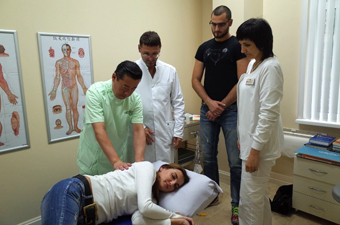 Shiatsu therapy at a sports rehabilitation center in Belarus

Q: One of the characteristics of shiatsu is said to be “diagnosis and immediate treatment.” What is that? 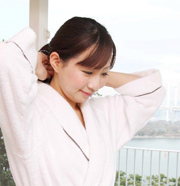 As I explained, the shiatsu practitioner decides which vital points to work on depending on the patient’s condition. Trained practitioners have extremely sensitive hands and fingers, so, by pressing, they can sense skin or muscle abnormalities and accurately diagnose the patient’s physical condition. Diagnosis and immediate treatment means giving treatment in response to diagnosis of the condition. It is a characteristic of shiatsu not found in other forms of therapy.

Q: Does shiatsu also have an effect on patients who have nothing particularly wrong with them?

Because of changes in the environment, such as temperature fluctuations, even healthy people undergo constant changes in their condition. Shiatsu has a conditioning effect to put things in order. In beauty care as well, shiatsu is effective in correcting things like pale complexion and swollen legs. The muscles of athletes are always overworked, so it is important to relieve muscle fatigue and stimulate the muscles. In addition, as well as physical conditioning, mental stability is important for athletes too. Shiatsu has a relaxing effect by promoting the secretion of serotonin, which brings about mental stability. 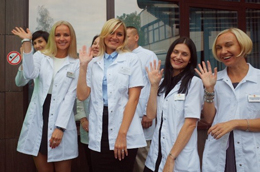 Role and Mission of the Third-Generation Master of Namikoshi Shiatsu

Q: What activities are you engaged in now as the third-generation master of Namikoshi Shiatsu?

As well as endeavoring to promote people’s health at my own shiatsu salon, following on from my father, Toru Namikoshi, I am making efforts to spread shiatsu overseas. 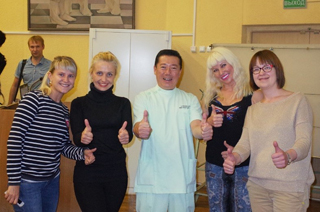 Recently I was invited to Belarus, where I gave a lecture and demonstration to introduce shiatsu to doctors at the 10th City Clinical Hospital in Minsk. I spoke about such topics as shiatsu therapy for depression, and the question-and-answer session was lively. I think they deepened their understanding of shiatsu. One doctor had a copy of the Russian edition of a book written by my grandfather, Tokujiro Namikoshi, 50 years ago and now out of print in Japan. I was very impressed. It was the fourth time for me to be invited to Belarus. Last time, at the invitation of the Belarusian Biathlon Federation, I gave shiatsu training at a sports rehabilitation center and exchanged opinions with sports doctors there about the application of shiatsu in sports medicine.

Q: Tell us about your mission and future ambitions as the third-generation master.

I myself gave shiatsu treatment to former Prime Minister Junichiro Koizumi. So in the three generations of Namikoshi Shiatsu, from my grandfather to the present, we have treated 13 prime ministers altogether. Continuing the tradition of Namikoshi Shiatsu, which has earned the trust of many people, including these famous figures, I want to contribute to promoting the health of people around the world.
Also, at present I am involved in joint research on shiatsu with a certain well-known hospital with the aim of establishing clinical evidence. Through more scientific verification, I hope to disseminate shiatsu to the world.