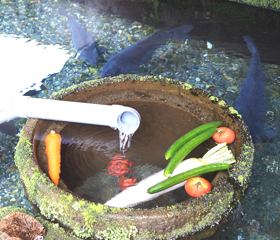 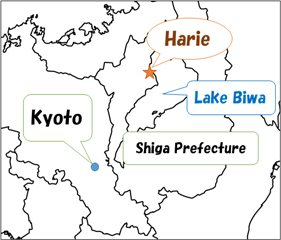 Have you ever heard the word kabata? In the Harie district of Takashima City in Shiga Prefecture, on the western shore of Lake Biwa, underground water flowing from the Hira mountains gushes forth naturally, and for generations local residents have used this spring water for their daily chores. They call it “living water” (shozu). Before the diffusion of tap-water services, they used this spring water for everything from drinking and cooking to doing the washing. The places in houses or in the community where this “living water” bubbled up were called kabata (a kind of well). These kabata were cherished as places where water could be obtained from nature and where people gathered for a chat. After the diffusion of sewerage and tap-water systems, the kabata went out of fashion. But in recent years, with growing awareness of the need for environmental preservation and increased importance placed on water and the harmonious interaction between human settlements and nature (satoyama), this system of utilizing spring water has been attracting much attention. In particular, when NHK produced a program and DVD about Harie’s kabata, titled “Satoyama: Japan’s Secret Watergarden,” in 2004, it drew an enormous response from both Japan and overseas. I myself remember being very moved by that program, and I had wanted to visit the district for some time. Recently my wish was fulfilled, and a representative of the Harie Shozu no Sato Committee kindly showed me around.

The Harieokawa River in front of Hiyoshi Shrine, dedicated to the local deity of Harie, and a former landing place used when rice-field boats were the main means of transportation.

Mr. Susumu Miyake (front), chairman of the Harie Shozu no Sato Committee, gives an explanation in front of Hiyoshi Shrine.

It was a fine day in the middle of May 2019 when I visited the office of the Harie Shozu no Sato (Harie, Village of Living Water) Committee, located by the Harie District Community Center. My guide for the day was Mr. Susumu Miyake, chairman of the committee.
First of all, as we gazed at the Harieokawa River flowing between the community center and Hiyoshi Shrine, Mr. Miyake began his explanation of the “Village of Living Water.” Actually, although it is called okawa (big river), the waterway is not so wide. In the limpid flowing stream, I could see green waterweed gleaming in the strong sunshine. Having been to the city of Mishima in Shizuoka Prefecture, a district of abundant natural spring water, I immediately asked, “Is that baikamo?” “Yes, it is!” replied Mr. Miyake, looking quite chuffed. Baikamo is an aquatic plant whose small white flowers look like plum blossoms. (Hence the name, which literally means “plum-blossom waterweed.”) Since baikamo can only live in clear water, its presence was testimony of the good quality of the Harieokawa River’s water. Mr. Miyake explained that the water gushing from the houses on both sides of the river was not wastewater but “living water” from their kabata. Since wastewater goes into the sewer system, it does not get mixed in the waterways or river at all. In addition, local residents get together to clean the river four times a year in March, May, July, and November. River weeds other than baikamo are removed on those occasions. Because the river is carefully maintained and administered in this manner, from the end of May into June fireflies appear on the riverside, and in the summer children have fun playing in the water. I could well envision children enjoying rides down the river on large styrene sheets.

Baikamo and their small white flowers waver on the translucent surface of the river.

Mr. Miyake then took me to see the kabata at his house. The mechanism of a kabata is shown in the sketch on the right. Water gushing up from an underground water vein first of all collects in the upper sink, with any excess water falling into the lower sink. Most kabata are also connected to neighboring houses by a water channel. 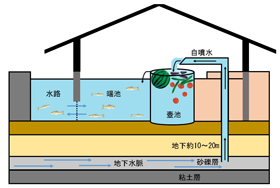 Sketch of Kabata (Courtesy of Harie Shozu no Sato Committee) 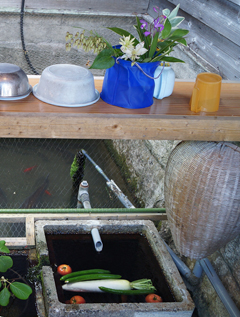 The flowers decorating the kabata are a token of gratitude to the god of water.

When this “living water” was the only source of water for daily living purposes, people drank it, washed vegetables in the upper sink, and fed scraps of food to the carp, trout, and other fish raised in the lower sink. So as not to dirty the water channel leading to nearby houses, rather than being passed through the kabata, awfully filthy water, such as water remaining after the washing of vegetables, was thrown away in the fields. Nowadays, following the diffusion of sewerage and tap-water systems, washing is done in the kitchen, and wastewater is washed down the sewer; apparently leftover food is not often fed to the carp anymore. Nevertheless, Mr. Miyake pointed to the carp and goldfish in the lower sink and said with a laugh, “The carp are still our pets, though!”
When the sewerage and tap-water systems began to spread, many local residents thought that the kabata were outdated and destined to disappear. But there were still older people who had been using them as an important source of “living water” for a long time. In addition, former Shiga Prefecture Governor Yukiko Kada and others emphasized the importance of kabata as regional culture, and then in 2004 they were introduced on the NHK program and DVD to much acclaim. The trend toward a reevaluation of kabata gained momentum. Today about 110 households use “living water” in their homes, of which about 90 households still have kabata.

When I took a stroll around the Harie district, I saw many other types of kabata as well. The first was an outdoor kabata belonging to Ms. Chiyoko Fukuda, who is a member of the Harie Shozu no Sato Committee. Generally speaking, there are two types of kabata: the indoor kabata, which is located inside the main house, and the outdoor kabata, which is set apart from the main building. There are also outdoor kabata that people other than the residents are permitted to use. Both Mr. Miyake and Ms. Fukuda have outdoor kabata. The water maintains a temperature of 12–14 degrees Celsius throughout the year. Unlike tap water, it feels cool in summer and warm in winter. Apparently vegetables and watermelons cooled in the upper sink in summer are juicy, moderately cool, and very tasty. 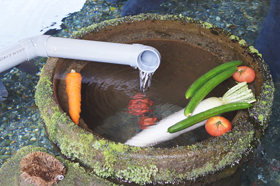 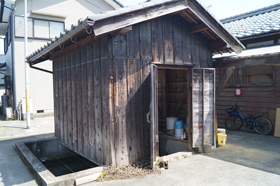 Continuing our stroll, Mr. Miyake and I visited the precincts of Shodenji temple of the Soto sect of Buddhism, where first of all we went to see the indoor kabata inside the building. There were many barrels of pickles in the space—far more than you would find in an ordinary household. Because the water in the kabata maintains a steady temperature, I was told, it is an excellent place for storing fermented food. In the middle of the temple precincts there was also another kabata (photo on left) where visitors can drink the water as well. Restaurant staff come here every morning to collect enough drinking water for the day ahead. 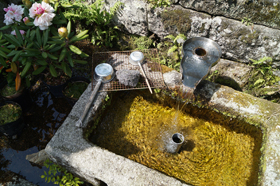 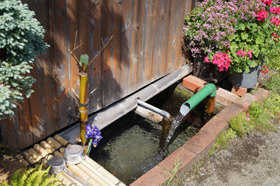 At a kabata surrounded by plants and with a single-flower bamboo vase, which evoked a very Japanese atmosphere (photo on right), Mr. Miyake told me that on hot summer days elementary school children coming and going from school stopped here to enjoy a much-needed drink. 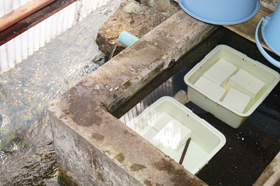 Uehara Tofu Store, which has a history of more than 100 years, has been making tofu with kabata water ever since its founding and storing it in upper sink water for sale. Tofu cooled in the kabata is delicious. Apparently it is so tasty that some customers, unable to wait until they get home, consume it on the spot. 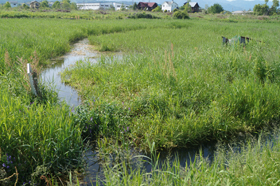 We then drove by car to an area of paddy fields. Nearby the paddies, where rice planting had just finished, there was a swampy area overgrown with weeds that at first sight looked just like an abandoned plot of land. This is the water-purification field, the original purpose of which was to clean water that is dirtied in fieldwork. By arranging a waterway and fishway there, it is expected to have an environmental effect as a biotope assisting the spawning and growing of fish. Indeed, surveys have revealed that the number of sujishimadojo (Cobitis striata), a fish that is native to Lake Biwa, has significantly increased.

Inner lake scenery (Water flows into Lake Biwa from the lock on the left.)

The spring water flowing from the kabata and water from the rice paddies flows through waterways and rivers to an inner lake called Nakajima, which is cleaned by clumps of reeds and other vegetation. Only the top layer of relatively clean water enters Lake Biwa.

Clusters of reeds grow in the wetland area on the Harie shore of Lake Biwa. As well as forming living space for spawning and feeding by waterside creatures, these clusters of reeds also play a role in promoting water purification. 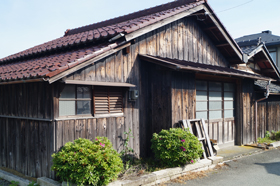 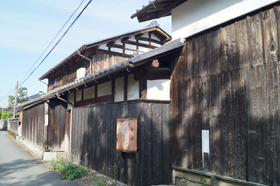 Although they are not directly related to waterside life, as I was strolling around and inspecting the kabata, I noticed that many houses in the Harie district have charred cedar outer walls. Charred cedar sheets are a traditional technique used in Shiga Prefecture and to the west. By burning and carbonizing the surfaces of cedar sheets, they become highly weather-resistant and durable and are also strong against corrosion and vermiculation. The deep charcoal color and unique feel create a soothing atmosphere. 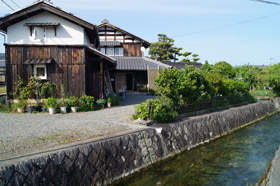 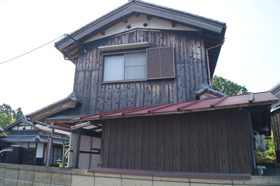 Activities of the Harie Shozu no Sato Committee​​

After he had kindly shown me around the village on a tour lasting about three hours, I asked Mr. Miyake about the Harie Shozu no Sato Committee. He told me that after NHK had broadcast the program introducing daily life in Harie in 2004, the number of visitors to the district increased, and the committee was launched with the purpose of providing guided tours and promoting environmental conservation. At present the committee has 63 members. Since almost all of the kabata are located on private property, visitors cannot just barge in to see them. So guides show visitors around and tell them about Harie’s natural environment and the lives of the local residents. Five guides are available on weekdays and nine on weekends. In the case of ordinary sightseers, a tour of only the kabata and village costs \1,000 per person; if the course includes the inner lake and shore of Lake Biwa, it is \2,000 per person. The revenue from these tours is used for such purposes as improving and preserving the local environment. Around 6,000 people visited the district in fiscal 2018.
Environmental preservation activities include cleaning the Harieokawa River and Nakajima, removing weeds from them, and cutting down withered reeds and burning them.​
The people of Harie had been describing the spring water as “living water” for generations, but at the time of the committee’s establishment, apparently there was a debate over whether to call Harie a “village of living water” or a “village of clear spring water.” Eventually it was decided to go with “living water,” because the spring water was supporting the lives of many creatures and vegetation and was directly connected to people’s lives.
The people of Harie have passed on a thoughtfulness toward water from generation to generation, teaching their youngsters, for example, not to use water taken from nature wastefully. The Harie Shozu no Sato Committee wants to contribute to kabata culture and local environmental preservation, but Mr. Miyake stressed that they did not want Harie to become a tourist spot. There are places that have lost their original attraction after becoming popular tourist sites. I couldn’t help but sense the thoughtfulness and wisdom of the people of Harie in Mr. Miyake’s final words.