The Kojiki (Record of Ancient Matters), Japan’s oldest chronicle, was compiled 1,300 years ago in 712. About one-third of the Kojiki is concerned with the world of mythology, beginning with the birth of Japan, and many of the myths involve Shimane Prefecture.
In commemoration of the 1,300th anniversary of the compilation of the Kojiki, the Japan Myth Expo in Shimane will be held in Shimane Prefecture for 114 days from July 21, 2012. IHCSA Café visited the tourist spots of Izumo Grand Shrine and its vicinity, where the main expo venues will be, as well as Yasugi City and Matsue City, to explore their attractions.

Where the Gods Gather

Izumo Grand Shrine is the symbol of the Izumo region, the so-called land of the gods. The shrine’s principal deity is Okuninushi no Mikoto. According to myths written in the Kojiki and elsewhere, Okuninushi, who had been engaged in building the land of Japan, presented the country to gods who had descended from heaven, and Izumo Grand Shrine was then constructed as a reward to Okuninushi. In this myth about the handing over of the country, it is said that Amaterasu Omikami, the principal deity of Shinto and regarded as the progenitor of the Japanese imperial line, dispatched one of her children as an envoy in the negotiations with Okuninushi. Subsequently the descendants of that child served as the chief priests of Izumo Grand Shrine; the current chief priest is said to be the 84th generation in that genealogical line.
In scenery that seems to symbolize the formation of Japanese culture centered on rice cultivation, the road running from Izumo Airport in the direction of Izumo Grand Shrine is endlessly lined with paddy fields. Gazing at this archetypal image of Japan, I felt as if my soul, so fatigued by city life, was being soothed. 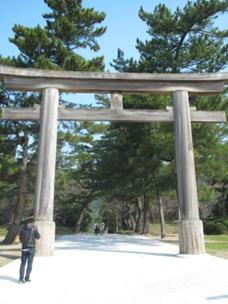 At the entrance to the approach to Izumo Grand Shrine, there is a towering wooden torii gateway. (This entrance is called the Seidamari, which means the “place where vigorous powers gather,” because in the past it was always crowded with stages and show tents and thronging with people.) From the torii the approach, lined with pine trees and paved with stones, unusually goes downhill. On the way down, on the right there is a small shrine, called the Harai no Yashiro, where visitors can exorcize the evil spirits that have imperceptibly gathered inside them. After purifying my body and soul here, I carried on along the approach. 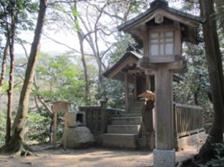 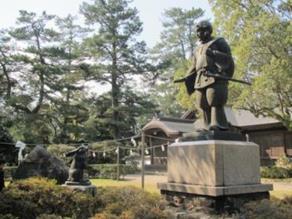 Okuninushi gazes gently at the rabbit.

At last, beyond an unusual iron torii and rows of pine trees, a shrine building came into view. After the pine trees have ended, there is a place for visitors to wash their hands and rinse their mouths before going on to worship. On the left here there is a bronze statue relating to the myth about the white rabbit of Inaba, which shows Okuninushi’s deep compassion. (The story goes that a white rabbit was ill-treated by Okuninushi’s mischievous brothers but then saved by Okuninushi, who was rewarded by being able to marry a beautiful goddess.) On the right there is a statue of Okuninushi receiving the power of marriage-making (in Shinto terminology, sakimitama and kushimitama) from a ball of light hurtling across the sea. Izumo Grand Shrine is especially popular among young women, who believe that their prayers here to meet the right partner will be heard. 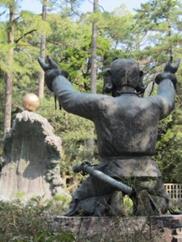 Passing through the bronze torii at the entrance to the shrine’s precincts, I arrived at the outer shrine building, which is adorned by a magnificent large shimenawa (sacred straw festoon), and the main hall, currently hidden because it was being renovated. The main hall was constructed in 1744 and is a national treasure. It has been undergoing five-year renovation work since April 2008 and was scheduled to reemerge from behind the cover in early June of this year. 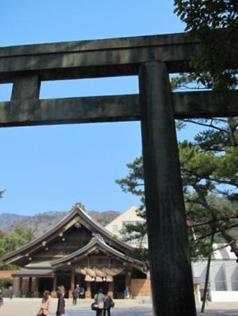 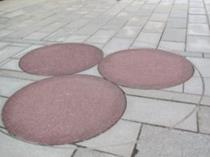 This spot is where three support pillars were unearthed.

There are two things of interest in the vicinity of the main hall. The first is the spot where three giant pillars, thought to have supported the main hall in the past, were excavated in 2000. They are said to lend credence to the theory that in the Heian period (794-1185) the main hall reached a height of 48 meters, twice the size of the present structure. 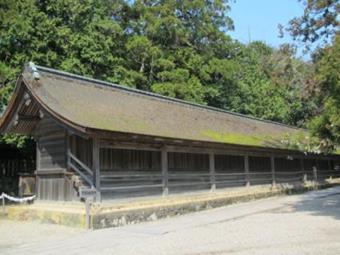 The second is a long and narrow buildings called the Jukusha, situated to the east and west of the main hall. It is said that in October according to the old lunar calendar gods from around Japan would gather at Izumo Grand Shrine and hold a meeting to decide various things relating to human life, including marriage. At such times, the gods from around the country would lodge in the Jukusha. Once a year the gods would leave their own districts and congregate at Izumo Grand Shrine. This is the reason why, in the old calendar, the month of October was called kannazuki (month without gods) by people around the country—except for folk in Shimane Prefecture, who referred to it as kamiarizuki (month with gods). Even today, Shimane Prefecture is the only place where the gods congregate.

There are two exhibits at the Shimane Museum of Ancient Izumo, located close to Izumo Grand Shrine, that especially stir romanticism for the past.

The first exhibit features the huge wooden pillars that were excavated in front of the main hall of Izumo Grand Shrine in 2000 and are thought to have been used in the construction of the main hall in the early Kamakura period (1185-1333). Until 2000 it had been widely argued that construction of a huge structure rising to a height of 48 meters would have been impossible with the technology available at that time, but the discovery gave credence to the theory. If the 48-meter-high hall really did exist, it would have been taller than the Great Buddha hall at Todai-ji temple in Nara and the highest structure in Japan at that time. 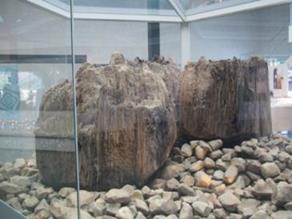 These giant pillars were excavated in front of the main hall. 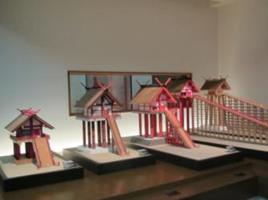 Models show how the great hall might have looked.

In the museum there are also models of how the colossal main hall might have looked in the past. There are various theories about the main hall’s shape, and the museum has several models reflecting them. In the Heian and Kamakura periods the main hall was twice the size of the present structure; there is even a theory that the ancient hall towered as high as 96 meters.

The second exhibit radiating romanticism for ancient times is a display of 358 bronze swords, 16 bronze pikes, and 45 bronze bells excavated in the 1980s and 1990s; they are all designated national treasures. This excavation of bronze artifacts, one of the largest ever, is evidence that a group with enormous power existed in this region and suggests the possibility that this region was deeply involved in the formation of Japan. 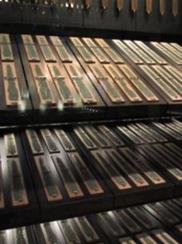 Many bronze swords were discovered. 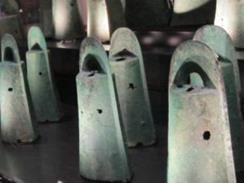