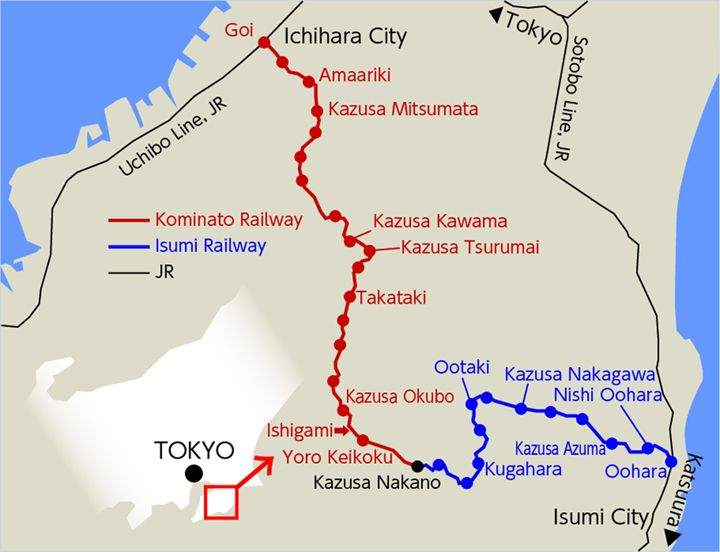 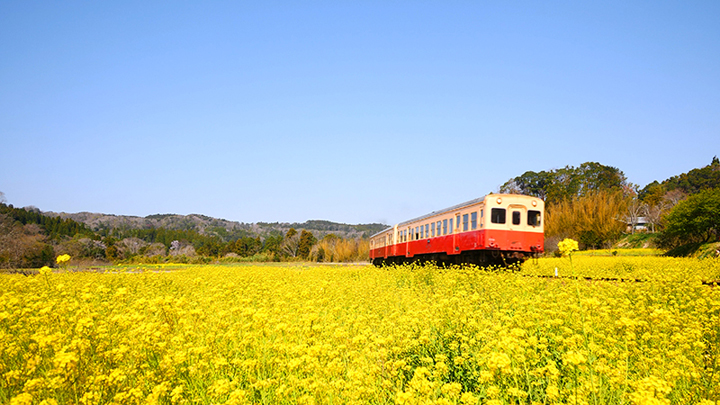 The Kominato Railway is a 39.1 km single-track line starting at Goi Station in the city of Ichihara in Chiba Prefecture. Although previously it was operated by Kujukuri Railway, which managed lines on the Boso Peninsula, today it is operated by Kominato Railway Co., Ltd. Construction of the line to provide a means of transport for the people of Boso began in 1923, and the full line opened in 1928. The original idea was to have the final station in the vicinity of Awa-Kominato Station on the Pacific side of the peninsula. However, the Kihara Line of the Japanese National Railways (JNR), as it was then known (it is now called the Isumi Railway), was due to run as far as Kazusa-Nakano, and there were financial difficulties to boot, so further construction beyond Kazusa-Nakano Station was abandoned.

The Kominato Railway has 18 stations, almost all of which are unmanned. Kazusa-Nakano Station, the final stop, is managed jointly with Isumi Railway Co., Ltd. The rolling stock consists of old model KiHa 200 Series carriages, and the line is nonelectrified and single track. So even though the Kominato Railway is located in the metropolitan region, the station buildings and trains on the line exude a nostalgic atmosphere, making it popular among not only railfans but general sightseers as well. Chiba Prefecture has selected the Kominato Railway and scenery along the route as one of the “Chiba Cultural Assets” sites.

The number of passengers on the Kominato Railway has been declining year by year. Sometimes, depending on the place and weather conditions, there might be more people gathered along the line to take photos than there are passengers riding in the train. In 2015 Kominato Railway Co., Ltd. commenced operation of the Boso Satoyama Torocco sightseeing train, but it has been suspended due to the impact of the novel coronavirus outbreak in the spring of 2020. The line also suffered damage from a typhoon that hit the Boso Peninsula in 2019. Services on part of the line had to be stopped, although as of March 2020 it was fully operating again.

END_OF_DOCUMENT_TOKEN_TO_BE_REPLACED

Print  Shiretoko Peninsula, which I visited recently, is situated on the northeastern side of Hokkaido and is […]

A Long-Established Ryokan Founded in 1630 and Popular with Foreigners

Tonosawa Ichinoyu Honkan, a long-established ryokan in Hakone, a prime hot-spring resort not far from Tokyo, i […]

OMO5 Tokyo Otsuka, representing a new brand of hotel from Hoshino Resorts, opened in front of Otsuka Station i […]

Tower of the Sun: The Symbol of Osaka Expo ‘70

HakoBA Hakodate—the Share Hotels has opened its doors in the nostalgic port city of Hakodate, Hokkaido. An 85- […]

A new commercial building called Ginza Place has been constructed at the Ginza 4-chome crossing, which can be […]

This time I visited the commercial port city of Onomichi, which still retains the good-old ambience of the S […]

Shiga Highland is well-known as a skiing mecca; it was a venue for alpine events during the Nagano Winter Ol […]

A Visit to Tomioka Silk Mill, a World Heritage Candidate, and Its Vicinity

After about an hour’s ride from JR Takasaki Station on the local Joshin Dentetsu Line, which was opened in 189 […]

Hotel Matsushima Taikanso   Matsushima in Miyagi Prefecture, which gets a three-star rating in Michelin’s Gree […]