The city of Sukagawa in central Fukushima Prefecture is located in a long east-west region with splendid views of nature stretching all the way from the Nasu Mountain Range in the west to Abukuma Highland in the east. In the Edo period (1603–1868) the city flourished as a staging-post town on the Oshu Kaido, one of the five major highways at that time, and it has prospered as a commercial town for ages. Lots of delicious fruit and vegetables, such as apples, pears, and tomatoes, are grown in Sukagawa. Year after year, however, the environment surrounding the city’s agricultural industry has become increasingly severe due to such factors as the aging of farmers and shortage of successors. Until recently Sukagawa boasted Japan’s highest production of cucumbers harvested in the summer and fall, but now that title has been taken over by the city of Date (also in Fukushima Prefecture).
Moves are beginning to break out of these doldrums and increase the farming population through the utilization of productivity-improving information technology and robots. In this article, I introduce the efforts of the Fukushima Seed Center, which, in cooperation with a couple of IT ventures, aims to reduce the amount of labor required in cucumber cultivation and make farming more attractive. 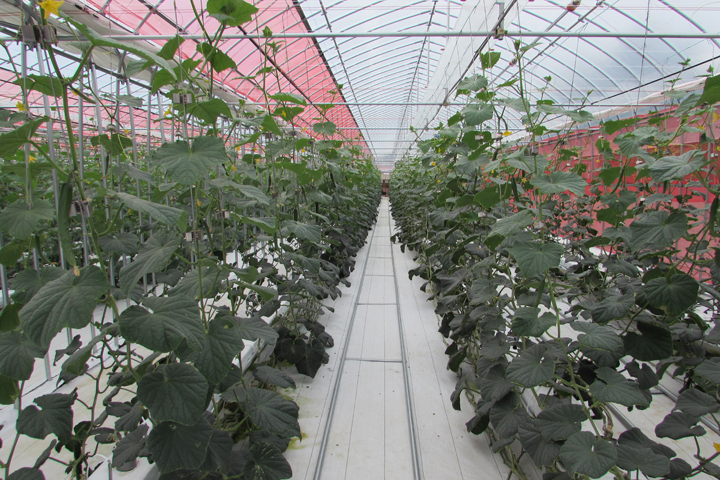 Cucumber cultivation inside the f-seed.Lab greenhouse

END_OF_DOCUMENT_TOKEN_TO_BE_REPLACED

Print “Children of the Sea” The picture above, together with a note by the artist muttering &#8220 […]

Print  When we think of bullfighting, we immediately picture the scene of a matador in Spain waving a red cape […]

Nishiaizu International Art Village occupies a wooden former school building. My interest was piqued when I he […]

An Interview with Wakaba-san, a Young Geisha in Kisarazu

IHCSA Café interviewed Wakaba-san, a young geisha in Kisarazu who made her parlor debut in September 2016 whil […]

Talks about Hospitality for Foreigners

Ms. Hinano Sugimoto will be the representative of Japan at the 2018 Miss International beauty pageant, which i […]

In the modern era of expanding globalization, urban areas are full of things, money, and the latest fashions […]

Teachings and Romanticism of Ancestors Still Alive in Today’s Hokkaido

Hokkaido welcomes about 7.85 million domestic and international visitors a year (fiscal 2015 figure). In the p […]

Namikoshi Shiatsu was founded by Tokujiro Namikoshi and then spread from Japan to the world by his son Toru. T […]

The demographic phenomena of depopulation and aging accompanied by a low birthrate are advancing in Japan. But […]

Café Interview “I want to become just like a hot spring itself!” Mayumi Yamazaki, Hot-Spring Essayist

Kentaro Minagawa Talks about the Attractions of Skiing

The Joy of Innocently Zooming down the Ski Slopes The year 2011 marks the centennial of skiing in Japan. One h […]

Harnessing Ties Among Factories for Monozukuri

Hospitality of a Concierge

Warm Hospitality, Japanese Style Part 4 The Hospitality of a Concierge—Reading the Minds of Guests Ms. K […]