There is an ukiyo-e by the famous woodblock print artist Utagawa Hiroshige (1797–1858) depicting the hustle and bustle of Tokyo’s Nihombashi area during the Edo period (1603– 1868). In the picture, one can see the Ozu Washi store, which still stands on the same site and continues to do business almost 370 years since its founding.
Ozu Washi is a specialty store that, ever since its establishment, has engaged in the procurement and sale of washi (Japanese paper) produced at workshops across the country. Today the head office building of the store not only sells washi goods but also fulfills the role of a disseminator of washi culture by, among other activities, displaying historical materials showing the relationship between paper and the Japanese people and holding calligraphy and ink painting classes. If they want, visitors can also experience washi papermaking under the guidance of Mr. Kiyoshi Takagi, formerly deputy manager of the shop and now in charge of public relations. Mr. Takagi showed me around Ozu Washi’s head office building, and I asked him about the reasons for the development of paper culture in Japan and the outstanding practicability of washi.

The Ozu store is shown on the right at the back in Utagawa Hiroshige's "Prosperity in Odenmagai in the Eastern Capital."

Ozu Washi was founded in 1653, in the early Edo period, as a washi wholesaler. Previously washi had been used only by the nobility and samurai, but at that time washi production and consumption were expanding as paper use spread among the masses too. It was an age in which ordinary folk also engaged in learning, enjoyed reading books, purchased ukiyo-e, and even used disposable paper like today’s tissue paper. The business of collecting old paper and paper scraps took off, and there was even a recycling system by which the collected paper was turned into recycled paper.
Westerners who began to visit Japan in the nineteenth century were amazed that Japanese houses were “made of wood and paper.” What they saw was the daily life of the Japanese people surrounded by paper—interior furniture like paper screens and sliding paper doors, paper lampshades for lights and lanterns, and even umbrellas and raincoats made of paper. Papermaking technology was already advanced in the West, but such uses of paper, and the concept of disposable paper, did not exist. The reason seems to lie in the raw materials and method of producing washi. 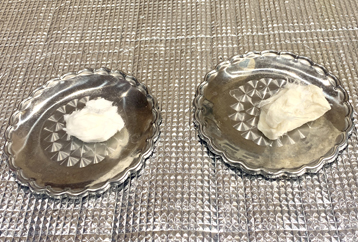 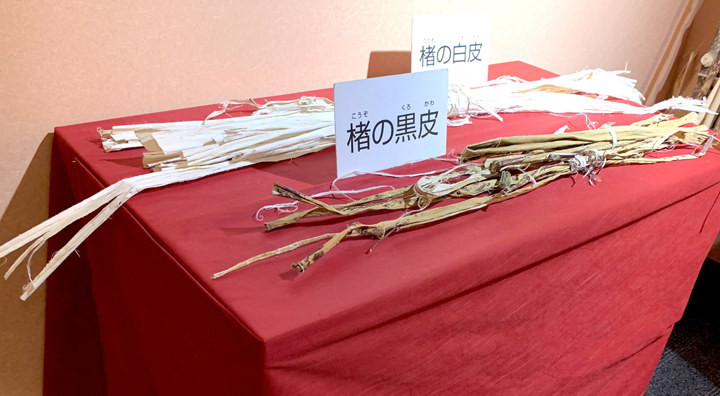 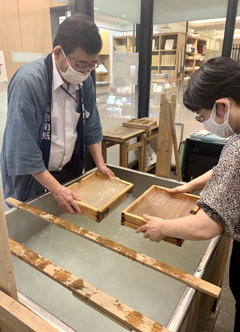 Hand-made washi papermaking experience; Mr. Takagi is on the left.

In Western papermaking technology, the raw material is repeatedly made and piled into layers. As a result, the finished paper is strong but thick. In contrast, in the case of washi, the fiber is intertwined through a complex process in which the raw material is shaken vertically and horizontally. This technique produces a robust paper without the need for layering. As a result, the finished paper is thin and translucent. Furthermore, the amount of raw material used is small, so it is an eco-friendly technique just right for a country like Japan with scant resources.
This difference in production method is evident for not only hand-made but also machine-made paper. In the case of Western paper, the mixed raw material is placed on the conveyor belt and sent at ultrafast speed in one direction to make the paper. In the case of washi, however, the conveyor belt is made to vibrate vertically and horizontally as the raw material moves along. As a result, although the speed of manufacturing is slowed, the fibers intertwine tightly to produce paper that is almost as strong as hand-made paper.
Thanks to these original raw materials and methods, washi is thin and has outstanding durability and translucency. And it has given rise to a unique paper culture in Japan. Since the high absorbency of washi makes it ideal in Japan’s hot and humid climate, washi has been widely used in daily life.

In the twentieth century various materials replacing paper were invented and mass-produced both in Japan and overseas, and the presence of paper in daily life diminished. Even today, although washi is closely associated with Japan’s traditional culture, such as calligraphy, Japanese painting, colored craft paper, and tissue paper for the tea ceremony, most Japanese have an image of washi as something out of the ordinary. Also, the trend of the times is toward a paperless society. Is there any demand for the practical use of washi then?
Mr. Takagi told me about some surprising uses of washi today. In the process of smoking to make ham, for example, machine-made washi produced from 100% hemp is used; the surface is coated with layers of liquid rayon. The washi is molded into a cylindrical shape, into which the ham is inserted for smoking. Because of its breathability, sturdiness, and resistance to breakage, washi is a perfect material for smoking. Furthermore, although breathable, washi does not allow fine particles in the atmosphere to pass through. Taking advantage of this characteristic, machine-made washi is also used in the small bags containing antibacterial preservatives for confectionary. In addition, washi masking tape is widely used at construction sites and so on. While it is difficult to cleanly remove ordinary duct tape, the strong and hard fibers of washi stick firmly to the adhesive surface, so apparently there is no residue after removal. 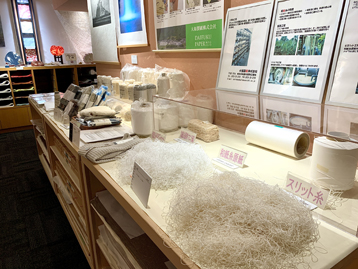 On the third floor of the Ozu Washi building, little-known uses of washi are introduced. Washi yarn is produced by cutting washi into thin strips and twisting them into a thread-like shape. Towels, socks, and other items made by combining washi yarn with chemical fiber are already on sale in shops. They have a light, soft touch and of course are washable over and over again.

Ultrathin washi, which flutters even in the almost completely still room, is used by art galleries around the world in the restoration of works. Because of the ultrathin washi’s high degree of transparency, the original work underneath is not obscured even when the washi is placed over the surface. Ultrathin washi can also be attached to the back of the work for reinforcement. In addition, because ultrathin washi adapts well to the tones of old paper, it is used in the restoration of old documents too.
An acoustic loudspeaker using washi has been developed as well. Instead of a speaker, a washi tapestry is placed in front of the sound source. Vibrations are transmitted from the sound source to the washi, as in bone conduction, and these vibrations turn into music that fills the space all around. The sound is not distorted and can be heard far and near, above and below. Apparently one does not tire of the sound even when listening for a long time. 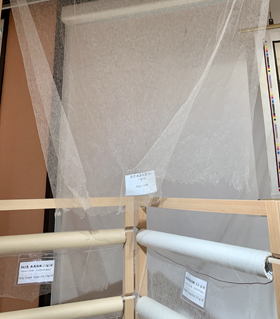 As well as various washi produced around the country, the shop on the first floor sells accessories and sundries made from washi. Washable washi masks and washi mask cases, which take advantage of washi’s antibiotic property, are popular. The potential of washi as not only a traditional craft but also an integral part of daily life continues to grow. 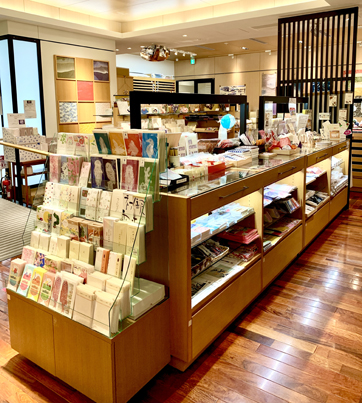 The shop sells washi accessories and other products. 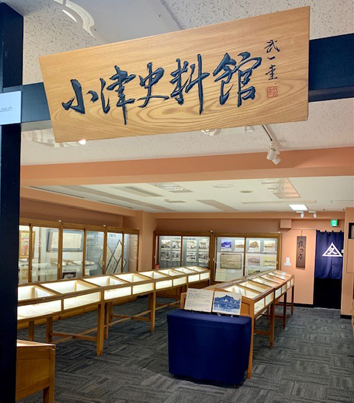 Finally, I visited the Ozu History Museum on the third floor of the building. This museum displays many materials relating to the history of Ozu Washi since its founding. Among them, there are hints on how to continue a business for well over three centuries.

Pointing to a photo of the Ozu main store in Matsusaka near Ise, Mr. Takagi told me an interesting story. For some reason, the photo shows many cooking utensils in the store. Apparently, in the Edo period, the Matsusaka store used to serve food free of charge to customers from Edo (present-day Tokyo) who were making the pilgrimage to Ise Shrine. At that time, the roundtrip between Edo and Ise took about a month. The idea was that if Ozu’s customers told others they encountered on the way about this service, the reputation of Ozu would spread. In other words, Ozu saw the pilgrimages to Ise Shrine, which became a nationwide boom in the Edo period, as a business chance and used word-of-mouth chitchat as publicity. 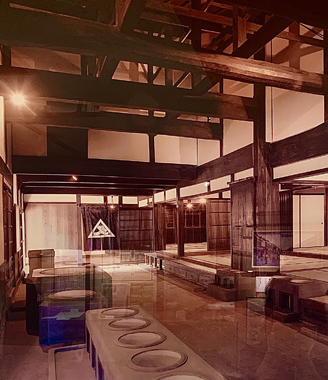 The Ozu main shop in Matsusaka near Ise; many cooking utensils can be seen.

The historical materials show that while Ozu enjoyed plain sailing through the Edo period, it then got caught up in the throes of the final years of the Tokugawa shogunate. As Ozu was a large merchant, it received demands for huge military funds. Several receipts on display, including one for 15,000 ryo, show that Ozu supplied funds to the shogunate army. Converted into present-day value, the total of all the receipts comes to a whopping several billion yen.
At the same time, Ozu provided a considerable amount of funds to the forces opposing the shogunate as well. It was a wise strategy to guarantee survival whichever side won and formed a government in the future. Eventually the shogunate collapsed and the new Meiji government took over the reins. The new government subsequently appointed the owner of Ozu to some honorable posts, including president of Shoho Kaisho, a new commercial agency set up by the new government the first joint-stock corporation in Japan. The flexible two-pronged diplomacy adopted by Ozu toward the end of the Edo period had paid off. 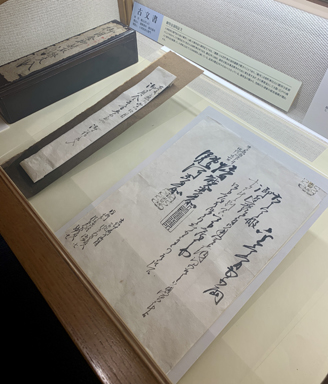 A receipt for 15,000 ryo issued by the shogunate

In the Meiji period (1868–1912) Ozu branched out into diverse businesses, including banking and spinning. Later, it recovered from the blows of the Great Kanto Earthquake in 1923 and the Great Depression in the 1930s, abolished the hereditary system characteristic of old establishments, and promoted flexible management. Indeed, Ozu Washi’s ability to overcome the challenges of the times seems to be an embodiment of the strength and suppleness of washi itself.