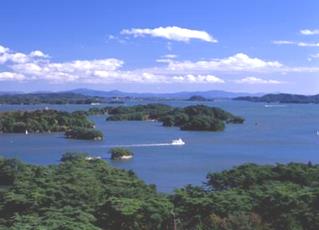 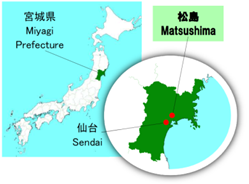 Matsushima in Miyagi Prefecture, which gets a three-star rating in Michelin’s Green Guide Japan, is one of the three most scenic spots in Japan. Many visitors from both Japan and overseas are attracted to the area not only by the picturesque beauty of its small islands floating in the ocean but also by the numerous historical tourist sights, including the three-star Zuiganji temple. Hotel Matsushima Taikanso was founded in the town half a century ago. We asked the hotel’s vice-president Ms. Yuko Isoda, who handles the hotel’s hospitality and management, about her many trials and tribulations over the years.

In 1961, when it was founded, Taikanso was a typical Japanese-style ryokan, a wooden structure with two floors and 30 guest rooms. Today, Hotel Matsushima Taikanso is the largest hotel in Matsushima, a seven-floor ferroconcrete building with 256 guest rooms and, among other facilities, a convention hall with a capacity of 1,700 people. The high ground where the hotel is located, overlooking Matsushima Bay, is designated as a special scenic spot, so regulations are rigorous. Negotiations with the Agency for Cultural Affairs and others concerning construction were extremely complicated. Taikanso is the only hotel in Matsushima that affords a full panoramic view of the bay, and guests proclaim with admiration that “It’s a splendid miniature garden!” and “It’s just like the hotel’s own back garden!” In particular, coupled with the wonderful French cuisine, the view from the seventh-floor restaurant, extending across the Pacific as far as the horizon, is one of the lasting memories of Matsushima that visitors take home with them.
While building up this illustrious reputation, though, Ms. Isoda insists that the reforms implemented so far are still at the development stage. “We call ourselves a hotel,” she says, “but we are neither a genuine hotel nor a genuine Japanese-style ryokan. We’re half ryokan, half hotel!” In order to respond sincerely to the various requirements of guests, she explains, there are many things that just cannot be done within the ryokan framework.

Rather than being bound by the typical ryokan style of “one night, two meals”—a set package of evening meal, overnight accommodation, and breakfast—Taikanso, which places importance on the perspective of users, offers a selection of meals for guests to choose from. At first, recalls Ms. Isoda, some people said that this approach was not suitable for Japanese-style Matsushima, but there were many requirements from guests that could not be met only with Japanese food. So Taikanso invited skillful chefs from famous restaurants serving Western and Chinese dishes, and now the hotel offers a wide range of excellent cuisine.
Because of business customs, Taikanso’s shift to a hotel-like style of separating accommodation and meals is still only partial. But when guests make reservations, the hotel ascertains their requirements in detail and actively endeavors to propose the best plan for each individual. Furthermore, in principle the chefs operate in two shifts, so, as the separation of accommodation and meals advances, the hotel is able to meet the requirements of visitors who come only for meals. 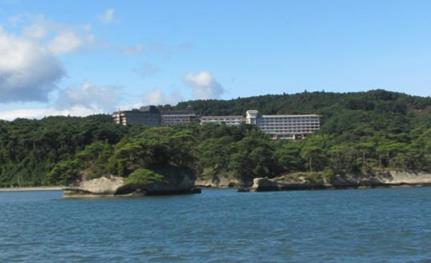 As for the guest rooms, these days Japanese travelers do not necessarily prefer purely Japanese-style rooms—even at a place that is described as one of the three most scenic spots in Japan. Therefore, 20% of Taikanso’s guest rooms are completely Japanese-style, and the rest are Western-style rooms and mixed Japanese- and Western-style rooms combining the Japanese-style sense of relaxation with Western-style convenience. So today Taikanso is able to offer a variety of room types in terms of layout, size, view, and other factors.
“After we have shown guests to their rooms, we place importance on each person’s private time,” says Ms. Isoda. So instead of service by room waitresses, as in a typical ryokan, Taikanso accepts individual requests from guests and also assigns staff to respond swiftly and wholeheartedly to requirements in their designated areas. At the same time, since some guests might make endless demands, Taikanso takes care not to differentiate among guests by offering unlimited service. Whatever guests stay at the hotel, regardless of whether they are Japanese or foreign, they are treated with the same kind of uniform hospitality.
The buffet at Taikanso, which offers representative cuisine from around the world, is extremely popular. Unlike other places that introduced buffets in order to reduce expenses, Taikanso introduced its buffet to enable guests to enjoy various dishes diligently prepared with selected ingredients. It was a pioneering experiment in the Tohoku region. Furthermore, many guests show great interest and enjoy the performance in which a full-sized tuna unloaded in a nearby fishing port is cut and prepared in front of their eyes. (Owing to uncertain supplies, this performance was suspended when we visited.) The preparation by expert chefs of beef tongue and oysters, a local specialty, in full view of guests is also popular.

Many guests from overseas use Taikanso. The hotel is unable to attract visitors only with its geographical advantages, but its accumulation of efforts to change things one by one for guests has received plaudits both domestically and internationally. Even more foreigners have come since Taikanso established a setup to accept them, diversifying its food menu and catering to special requirements, such as vegetarian meals.
Foreign guests are no longer more difficult to handle than Japanese, but in the past, Ms. Isoda recalls, there were certainly problems. For example, foreign guests mistakenly thought that everything put before them was theirs to keep, and things like yukata (informal kimono) and Japanese tableware, which foreign guests found fascinating, would vanish.
At first Taikanso sought to attract foreigners in periods when the number of Japanese guests fell, but then a problem arose with the rooms. Foreigners tended to stay in small numbers—one or two per room, as in a hotel—so the more foreign guests came, the worse sales efficiency became. Nevertheless, the arrival of foreign guests has had the effect of energizing the workplace. As Ms. Isoda remarks, “When foreigners started coming, our employees seemed to mature. Coming into contact with foreign guests gives them the feeling of doing an international job, so our employees are happy too.” Taikanso has a steadfast determination to take the lead in welcoming foreigners to one of Japan’s three most scenic spots.

Ms. Isoda also serves as president of the Okami Association of Japanese Ryokan and actively travels overseas every year to promote business. Last year she visited the president and government ministers of the Maldives and held discussions with them. In addition, as chairman of the Miyagi Okami Association, Ms. Isoda brings together the okami (ryokan proprietresses) of Miyagi Prefecture and travels around the country herself to promote the attractions of Miyagi Prefecture. She also endeavors to improve the environment surrounding ryokan and hotels by attending meetings of various government committees and other bodies. Ms. Isoda engages in such activities because she is aware of local expectations of Taikanso and her hotel’s heavy responsibilities and because, more than anything else, she understands the importance of gathering and exchanging information. Furthermore, she recognizes the limits to what individuals and facilities can do alone.
Ms. Isoda has constantly been ready to try new things in order to cope with the diversification of guests’ needs. One wonders what her next idea will be.

There are 15 tourist spots in Matsushima that are given stars in Michelin’s Green Guide Japan, and the town attracts many sightseers, both Japanese and foreign. Matsushima is conveniently located just 30–40 minutes’ train ride from Sendai, the gateway to the Tohoku region, and the main tourist spots are within walking distance of Matsushima-Kaigan Station. 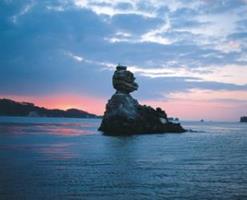 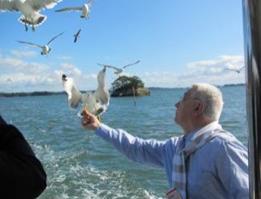 Matsushima is one of the three most scenic spots in Japan along with Amanohashidate in Kyoto Prefecture and Miyajima in Hiroshima Prefecture. Among its attractions, the 260 green pine-covered islands, large and small, dotted around the calm bay are representative of the area as a whole. The view of these islands from high ground is of course excellent, but in the end the best thing to do is to take a ride on an excursion boat around the bay, from where you can see the rich individual characteristics of the islands close at hand and enjoy scenery that is not visible from land. Another delight is the sight of the black-tailed gulls trailing the boat in the hope of getting some of the feed given to passengers to toss in their direction. The gulls amazingly catch the feed in midair or even dive down and deftly swoop it out of the hands of passengers.

As well as scenery woven by the ocean and islands, visitors should not miss the many historical and cultural properties in Matsushima connected with the Date family and the famous samurai Date Masamune (1567-1636). 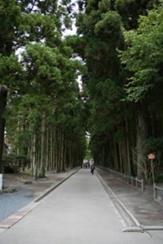 Zuiganji temple, which has an approach lined with cedar trees and caves, is a majestic building truly displaying the essence of the gorgeous Azuchi-Momoyama period (1568-1600), when decorative culture of high artistic value flourished. Visitors will be awed by the elaborate openwork transoms and splendid paintings on the fusuma sliding doors and tokonoma alcoves.

Entsuin temple, which houses a colorful zushi (miniature shrine), is a tranquil place with a carefully looked-after moss garden, stone garden, and rose garden.
The Godaido is a Buddhist worship hall enshrining the Godaimyo, or “five wisdom kings,” which are unveiled every 33 years. It is said that the sight of the ocean down below through gaps in the bridge leading to the small island on which the Godaido is located is a means of bracing visitors for the pilgrimage.
Matsushima is also famous as a moon-viewing spot, and the Date family built the Kanrantei teahouse for this purpose. As you partake of powdered green tea here, the depth of history sinks in amid an ambience and scenery that have not changed in four centuries.
Matsushima has many other attractions that cannot be taken up here, including scenery that has been praised by people for ages, historical buildings, and museums. Coupled with the beauty of nature mutating through the four seasons, these attractions are sure to more than satisfy visitors. Inside the glittering Kanrantei teahouse Matsushima has many other attractions that cannot be taken up here, including scenery that has been praised by people for ages, historical buildings, and museums. Coupled with the beauty of nature mutating through the four seasons, these attractions are sure to more than satisfy visitors. 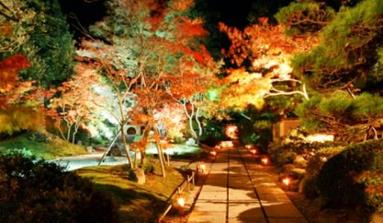 Entsuin is illuminated for a month from the end of October.