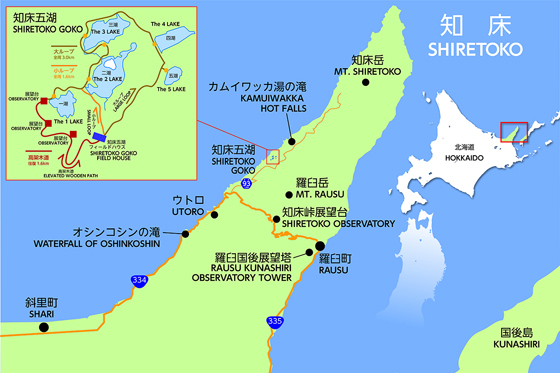 The Shiretoko Peninsula in eastern Hokkaido is dominated by the Shiretoko mountain range of peaks rising 1,200–1,600 meters, including Mt. Rausu, which towers in the center of the peninsula. Visitors can see various strangely shaped rocks, precipices, and other scenery connected to the geological origins of these mountains. An area covering about two-thirds of the northern part of the peninsula has been designated as Shiretoko National Park, and in 2005 the United Nations Educational, Scientific, and Cultural Organization (UNESCO) listed Shiretoko as a World Natural Heritage Site.
The peninsula is about 70 km long and about 25 km wide. Because of the steepness of the terrain, a third of the northern part, centering on Mt. Shiretoko, is extremely difficult to access by land. In winter the peninsula is surrounded by ice floes, which generate an affluent food chain. This is because when the ice floes melt in spring, a vast amount of plankton is produced. This plankton attracts vast numbers of fish, which in turn attract seals, Steller’s sea lions, white-tailed eagles and other birds, and, on land, brown bears and Yezo sika deer breed as well. In addition to its stunning scenery, therefore, Shiretoko is also home to abundant flora and fauna. As for human beings, they are concentrated in the communities of Utoro in the northwest and Rausu in the southeast. The climate of these two towns differs a lot. Utoro, which has a population of about 1,200 people, has many fine days, which is probably why agriculture and tourism thrive there. Rausu, with a population of about 4,000 people, gets more rain, snow, and mist; fishing is the main industry there.
The eastern part of Hokkaido is said to have many tourist spots. The nearest airport to Shiretoko is Memanbetsu, but the peninsula can also be accessed from Kushiro Airport if you also want to take in such places as Lake Akan, Lake Mashu, and Kushiro Wetland. Shiretoko attracts 1–1.3 million visitors a year from inside and outside Hokkaido to see its unique nature. The local governments and Shiretoko Nature Foundation engage in various activities to address the problems faced in protecting this abundant nature, as well as such issues as the coexistence of humans and other animals and the overbreeding of animals on the peninsula.
In June, armed with my photography equipment, I headed north to refreshing Hokkaido, which, unlike the rest of Japan, has no rainy season at this time of the year.

The Beautiful Sea off Utoro

This time I arrived in Hokkaido at Kushiro Airport, from where I drove northeast by car, with one eye on Kushiro Wetland and other attractions as I passed them. Beyond the town of Shari, I drove along a straight road known as the “Road to Heaven,” with a total length of 18 km. The scenery was magnificent and just what you would expect in Hokkaido. After a while the road led to a coastal route, and in about 30 minutes I reached the port of Utoro, which is the tourist center of Shiretoko and also a hot-spring resort. Driving a little further northeast along National Highway No. 334, I came to a beautiful coastline spot. Without hesitating, I stopped for a while to take photos. The evening sun was dazzling. Then two seabirds flew by. It was a moment that made me feel once again the beauty of nature. 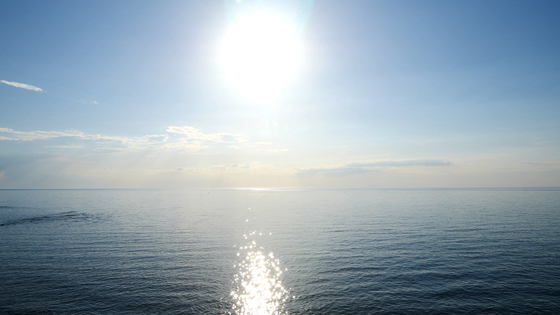 The following day, after staying overnight in Utoro, I left in the early morning. The sun rises earlier in Hokkaido than in the rest of Japan. And in Hokkaido, the sun rises earliest in Shiretoko. At this time of the year, it is light even before 4 am. There was a carpark by the national highway, and near the carpark you can see a waterfall. Selected as one of the 100 best waterfalls in Japan, this dynamic Oshinkoshin Waterfall is also known as the “Twin Beauties Waterfall,” because, as it plunges a grand 50 meters, it splits into two. Since you can get quite close to the basin, you can actually feel the spray as you watch the water falling. 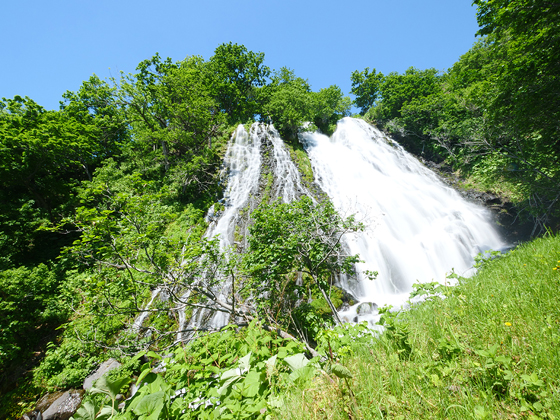 From National Highway No. 334 I entered Prefectural Highway No. 93 Shiretoko Park Route and headed for the five lakes of Shiretoko Goko. Against the backdrop of Mt. Rausu, the road meandered from left to right. The river flowing by the road, visible one moment and gone the next, was beautiful. Pulling up in a roadside carpark, I got out my camera. The sun’s rays glittered on the transparent surface of the water. The River Akai is only a short stretch of water, flowing from Mt. Rausu into the Sea of Okhotsk, but it gave me a feeling of the richness of nature in this region. 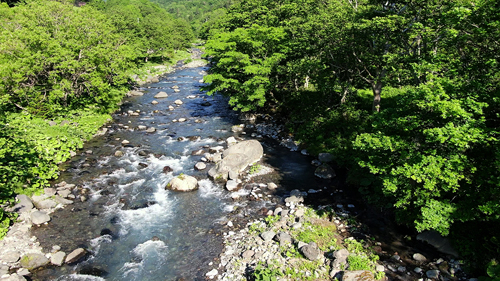 I drove on and eventually came to a junction, with one road leading to the five lakes of Shiretoko Goko and the other to the Kamuiwakka Hot Falls. I decided to go to the Kamuiwakka Hot Falls first, while it was still early, and then to Shiretoko Goko. From this point it was a gravel road. Listening to the sound of pebbles hitting the car body, I drove on for 11 km. It was a rather thrilling, winding road, with cliffs on the left and slopes on the right. After about 20 minutes I reached Kamuiwakka Hot Falls. Stopping in a carpark with a capacity for about 10 cars, I took my camera and got out. On the slope near the carpark, there was a single wild brown bear. I was astonished. Motionless, I stared at the brown bear, which was leisurely chewing grass. Occasionally it glanced in my direction, but it showed no signs of charging toward me, so I took a photo. Subsequently the bear climbed up the slope, so I was able to go ahead with my original purpose of photographing the waterfall, albeit with some concern. As its name suggests, this waterfall consists of hot-spring water. Apparently you can walk up to the source in about 10 minutes, but I just took some photos from the bridge and, with that bear still in mind, quickly headed back. 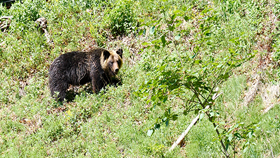 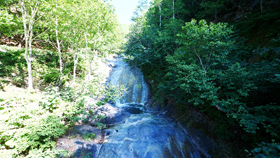 I drove southward along the gravel road again. At a plaza near the Shiretoko Goko junction, I had a go at flying my drone. The Shiretoko mountain range seen from above looks truly majestic and proud. Beyond Mt. Rausu I could also see Mt. Io, which is an active volcano, but it is no match for Mt. Rausu in terms of dynamism. 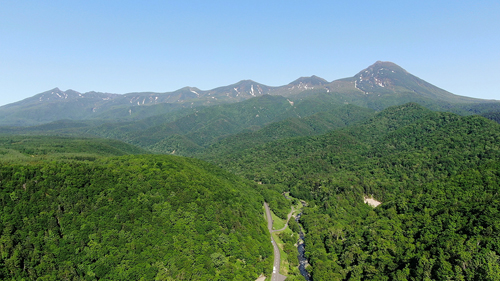 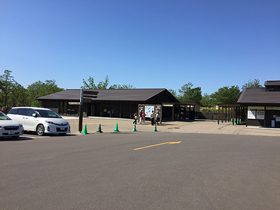 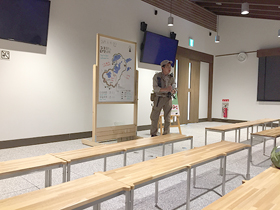 First of all, we went to the fifth lake, which is the smallest. The opposite shore seemed to be almost within reach. Beyond the lake, though, there is a primeval forest, and beyond the deep and dense forest you can see the mountain range. The course around the five lakes has been designed so that almost everywhere visitors can see the Shiretoko mountain range in the background, so every lake offers a superb view. 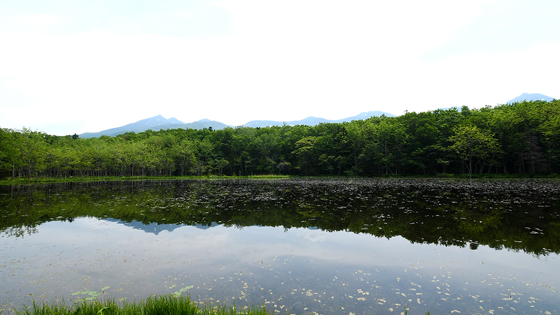 The Large Loop Tour involves a walk of around three hours over a distance of about 2.2 km, excluding the 800 meters of elevated boardwalk leading back from the final first lake. Here and there, with excellent timing, the guide would give us a talk about the vegetation, nature, or bears, so there was no question of getting bored. We were also given about five minutes at the observatories of each lake. While we were walking, the guide kept on talking in a slightly loud voice. He probably wanted to let the bears know we were there.

Our next stop, the fourth lake, which is seen in an elongated direction, is quite lengthy. Because Mt. Rausu can be seen in the distance, it has a rather mysterious atmosphere. The reflection of the mountains on the surface of the lake was beautiful too. 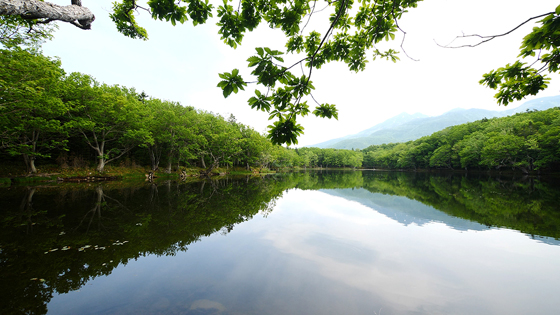 The third lake is the second largest. Because you view it crosswise, the opposite shore seems very wide. The mountains in the background are a perfect match. 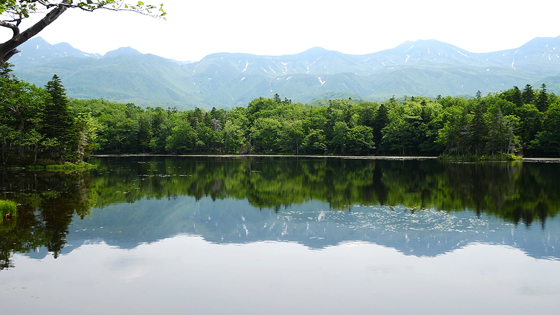 Before we reached the second lake, the guide leading us suddenly shouted out, “Brown bear droppings! I’ve never seen such large droppings and so many!” When I looked, I could see three or four large greenish-brown droppings of a brown bear lying in the middle of the road. Brown bears love Asian skunk-cabbage. For a moment I wondered whether brown bears might be nearby, but the guide put my mind at rest. 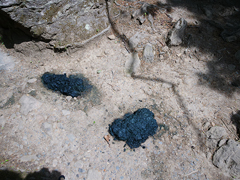 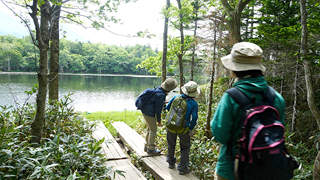 Participants in the guided tour

The second lake, the largest, is wide and long. A slight breeze began to blow. Ripples appeared on the surface of the lake, and the mountains swayed. 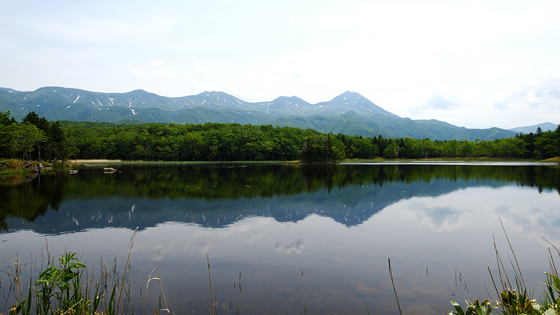 Our final stop on the tour was the first lake. Viewed from here, the mountains were beautiful, though they were no longer clearly reflected on the surface of the water. 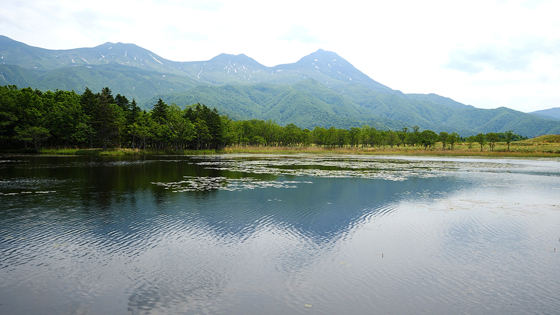 From the first lake we took the 800-meter-long elevated boardwalk back to the Field House. All the lakes had been beautiful, and the tour had given me a sense of the mysteriousness of nature. Nature that has been protected for a long time is precious. We were told the importance of not taking anything in there, not taking anything away from there, and understanding that it was we humans who were encroaching on the habitat of the brown bears. 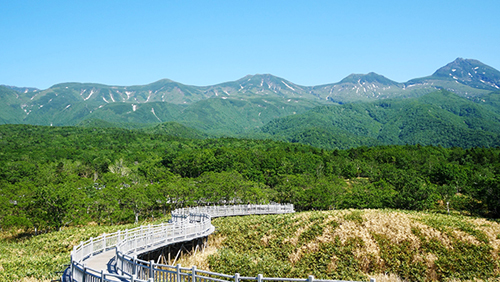 Leaving Shiretoko Goko, I headed southeast along National Highway No. 334. As it approached the pass, the road gradually became steeper and curvier. Little by little the view widened, and a large carpark appeared. This was the Shiretoko Pass Observatory. To the northeast, Mt. Rausu rose right in front of my eyes. Until then I had just been seeing the mountain range, but from here Mt. Rausu really did display its presence. Looking around, I could also see the Sea of Okhotsk to the northwest, Nemuro Bay to the southeast, and, floating in Nemuro Bay, the island of Kunashiri. 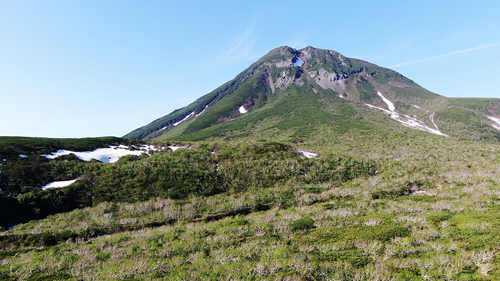 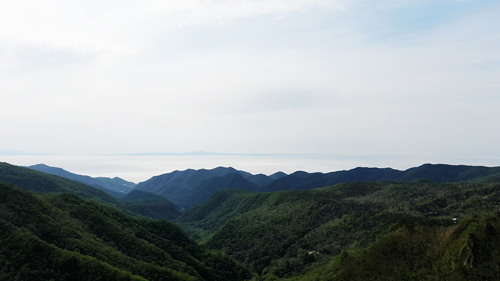 I drove down from the pass in a southeasterly direction and in about 15 minutes reached the town of Rausu. Typical of port towns in Hokkaido, Rausu was deserted. The main road running by the sea was lined with restaurants and souvenir shops. I wondered what lives the people had led over the town’s long history. Municipalities in the eastern part of Hokkaido have their own indelible characteristics. Municipal mergers became common throughout Japan in the 2000s, and a merger with the neighboring town was broached here as well. But it has not been realized. Utoro and Rausu are only about 20 km apart, but the 738-meter-high Shiretoko Pass is a major barrier. Nevertheless, Mt. Rausu looks down over both of the towns and also over the island of Kunashiri. Just five minutes by car from the center of Rausu there is the Rausu Kunashiri Observatory Deck. Standing 167 meters above sea level, it offers fine views of the port of Rausu, the island of Kunashiri just a stone’s throw away, and Mt. Rausu to the left. Of all the views I had had of Mt. Rausu that day, this one showed the peak at its tallest and grandest. 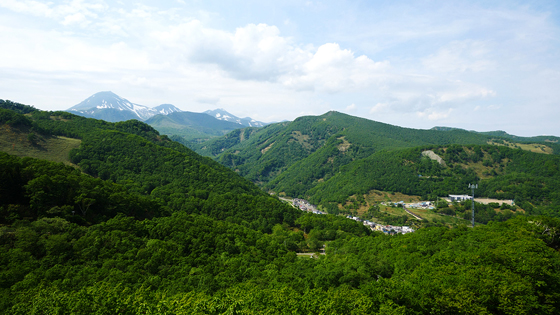 Photos and text: Arata Matsumoto, Sharata and Adwise, Inc.
URL: http://www.sharata.info/ (Japanese)
(Sharata supplies 4K videos of outstanding scenery in Japan so that as many people as possible can enjoy it.)