In the middle of Honshu, Japan’s main island, there are three mountain ranges running from north to south. These are the Japan Alps, commonly known as “the roof of Japan.” One of them, the Northern Japan Alps, has the Tateyama Mountain Range to the west and the Ushirotateyama Mountain Range to the east. The Tateyama–Kurobe Alpine Route, which links Toyama Prefecture and Nagano Prefecture, is known as one of the world’s best mountain sightseeing routes, and its grandeur and beauty enthrall visitors. Come the fall especially, many visitors, both Japanese and foreign, take the journey by train through the hidden scenery of the Kurobe Gorge in search of the splendid autumn colors. I visited Toyama to explore its abundant nature and delicious food. 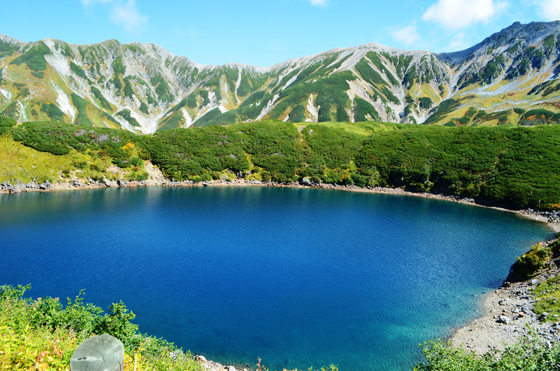 Have you ever heard the rather unfamiliar word garuppe? It means “devil’s river” in the Ainu language, and one theory says this is the origin of the name Kurobe, the place I am about to describe. Garuppe, it is said, evolved into garube and then Kurobe.

In order to explore Kurobe, I took the Kurobe Gorge Railway from Unazuki, which is famous as a hot-spring resort, to the final stop, Keyakidaira. This train is nicknamed the Torokko Densha, torokko referring to the carts used to carry stones and debris from construction sites. Originally the Torokko Densha was only used to transport materials for the development of power resources, but after local people and sightseers expressed a strong wish to see the spectacular scenery of Kurobe Gorge, it became a tourist train carrying ordinary passengers. At first, though, apparently sightseers were given a ride on the condition that their safety could not be guaranteed.
Kurobe Gorge is one of the three major gorges in Japan and has been chosen as one of Japan’s top 100 hidden scenic spots. The wild mountains and virgin forest that seem to jump at the train’s windows were awesome and quite befitting for a “hidden scenic spot.” As I immersed myself in this unusual setting, my dormant five senses came awake. 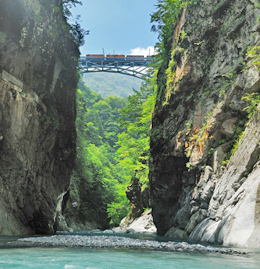 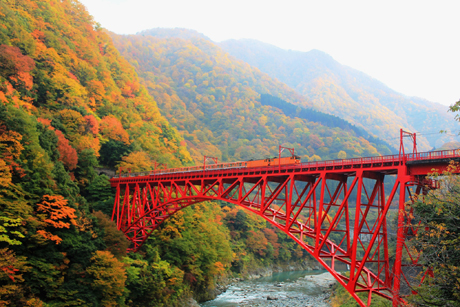 On the way, I got off the train at Kanetsuri Station, where you can see Kurobe’s semi-permanent snow that is said to linger throughout the year. This is a pile of snow that fell on Mt. Hyakkan and collected in a valley; it looks just like Tiramisu dessert. The sight must be very refreshing in summer.
On arrival at Keyakidaira Station, the final stop on the line, first of all you should go to the Keyakidaira Visitor Center to learn about Kurobe’s nature and the history of its development. 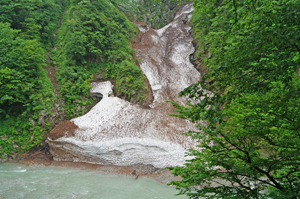 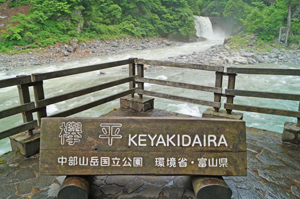 The Kawara Observation
Platform at Keyakidaira

Leaving the visitor center, I went down to the Kawara Observation Platform, which offers splendid views of the rugged Mt. Meiken and the brightly vermilion-colored Okugane Bridge spanning the main Kurobe River. The view of the gorge from atop Okugane Bridge is magnificent too. Crossing the bridge, visitors are greeted at the start of the footpath by a strangely shaped rock called Hitokui Iwa (Man-Eating Rock), which appears to be hanging over the path and ready to bite any time. Passing through this tunnel is rather thrilling—and a little scary too! Then eventually I came to Meiken Onsen. This is a hot-spring lodging, but I must say the coffee here is out of this world as well. Is it because of Toyama’s delicious water? Or the quality of the coffee beans? Or perhaps both? I recommend you to try. 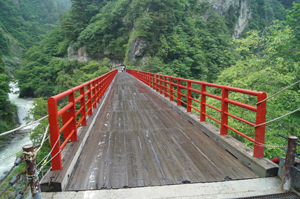 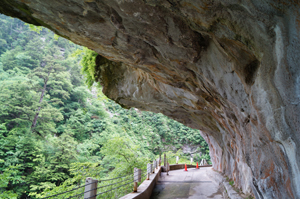 For evening dinner I had fresh sushi with toppings caught in Toyama Bay. They all had a faint sweetness and were very tasty. This sweet taste is evidence of freshness. I asked the head chef over the counter why Toyama’s sushi is so tasty.
“The melted snow and rainwater in the Northern Alps and Tateyama Mountain Range permeate the nutritious soil and flow into Toyama Bay,” he explained. “Furthermore, Toyama Bay is the deepest bay on the Sea of Japan side, and spring water comes up from the bottom of the sea. It’s full of minerals. This high-quality seawater produces Toyama Bay’s delicious fish. The ocean current is complex, mixing the warm Tsushima Current, cold deep-sea water, and so on, so about 500 species of warm-water fish and cold-water fish are living in the bay. That is why Toyama Bay is called a natural fish tank.”
I also asked about Toyama Bay Sushi, a local brand that has become quite topical among those in the know recently. “Toyama Bay Sushi is available at about 60 sushi restaurants in the prefecture,” the chef replied. “A set consists of 10 pieces of sushi and soup. The toppings are fresh marine products caught in Toyama Bay that day, so you get a taste of the season. The price varies from 2,000 to 3,500, depending on the restaurant. Toyama Bay Sushi is very popular, so it’s best to make a reservation. There are some foreign repeaters as well.” He then showed me a memo written in English of a conversation he had had with foreigners the other day. His face was brimming with a love of and confidence in Toyama’s food.
If you eat Toyama cuisine once, you are sure to want to come again. It has both Japanese and foreign food lovers smacking their lips. 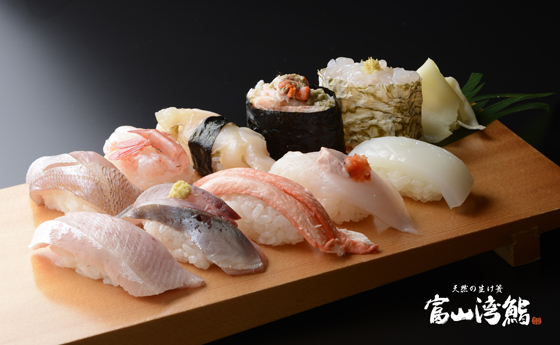 Mt. Tateyama, in the southeast of Toyama Prefecture, is one of Japan’s three major sacred peaks, along with Mt. Fuji and Mt. Hakusan (straddling Ishikawa Prefecture and Gifu Prefecture). It is a majestic mountain that has been worshipped since ancient times as a place where gods and spirits reside.
In the past only certain people could visit Mt. Tateyama, but today, following the opening of the Tateyama–Kurobe Alpine Route made possible by the improvement of means of transportation, it has become a major tourist spot visited by around one million sightseers every year from other parts of Japan and overseas.
Going from the Toyama Prefecture side, I got a cable car from Tateyama Station at the foot of Mt. Tateyama to Bijodaira and then changed to a bus bound for Murodo, which passed through a snow corridor (“The Great Valley of Snow”) lined by impressive walls of snow rising 20 meters high. About a 10-minute walk from Murodo, which lies 2,450 meters above sea level, there is the sparkling blue Mikurigaike Pond backed by the imposing figure of Mt. Tateyama. The sight is very picturesque indeed.
From Murodo I took the highest hybrid bus route in Japan to Daikanbo, passing through a tunnel directly under Mt. Tateyama, and from there I took the completely unsupported single-span ropeway, with a height difference of 500 meters and total length of 1,710 meters, down to Kurobedaira. On the way a fantastic panoramic view of Lake Kurobe and the Ushirotateyama Mountain Range spread out before my eyes. Finally, the journey from Kurobedaira to Lake Kurobe and Kurobe Dam is by cable car. For protection against heavy snowfall and also the preservation of scenery, this tunnel-type cable car has been built completely underground. Five modes of transportation—and every one of them a unique experience! 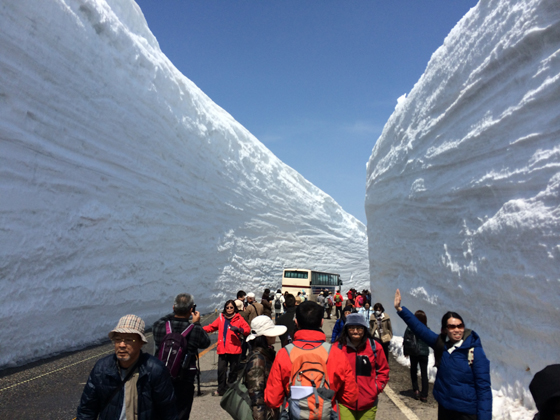 The Great Valley of Snow 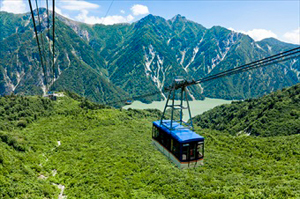 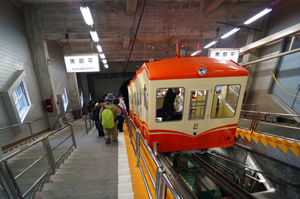 Diagram of the Tateyama–Kurobe Alpine Route

The Highlight: Kurobe Dam’s Harmony with the Environment

The Kurobeko Station tunnel comes out on top of a huge levee of Kurobe Dam. To the right is Lake Kurobe, the upstream reservoir. To the left is the downstream part, into which water is released. The levee rises 186 meters high, so looking down is rather frightening and made me feel weak at the knees. On the opposite side there is the Dam Observation Deck, which offers a splendid panoramic view of the beautiful arched dam and Mt. Tateyama. 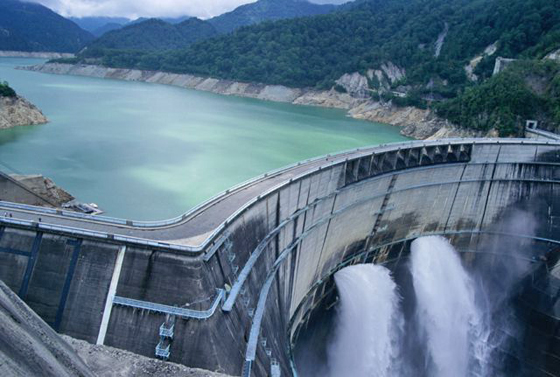 Spring water is drawn to this Dam Observation Deck from the fracture zone (a soft layer in which underground water collects) of Kanden Tunnel, which was extremely difficult to cut through at the time of the dam’s construction. When I turned the tap in the washroom, the water that came out was icy cold, making me think of the hardship that construction workers must have faced in their battle amid this cold water.
Another place that I recommend you to visit is the Kuroyon Memorial Hall on the third floor of the Dam Rest House. (Kuroyon is a common name for the dam and subterranean power station.) This memorial hall introduces the dam’s history and has wax figures of workers engaged in excavation, as well as a must-see documentary film called The Kuroyon Story, which depicts the toil of the men who worked on the dam.
If you still have some time to spare, take the pleasure boat cruise on Lake Kurobe. The name of the boat is Garube—that’s right, a derivative of the Ainu word garuppe meaning “devil’s river.” It takes 30 minutes to go round the lake, which is the highest in Japan. The view of Lake Kurobe’s surroundings from atop the emerald green water is something special, and the breeze is very refreshing. 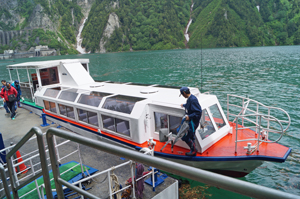 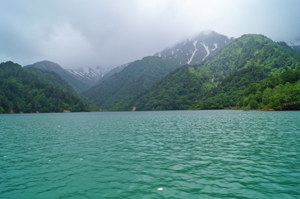 I hadn’t imagined that Toyama’s scenery was so beautiful. If only I had come here earlier, I thought with some regret.
In March of next year the Hokuriku Shinkansen section from Tokyo Station to Toyama Station will open, connecting them in just 2 hours 7 minutes. So whenever I feel the urge to eat Toyama’s delicious sushi or see its magnificent nature again, all I will have to do is hop on the weekend Shinkansen.