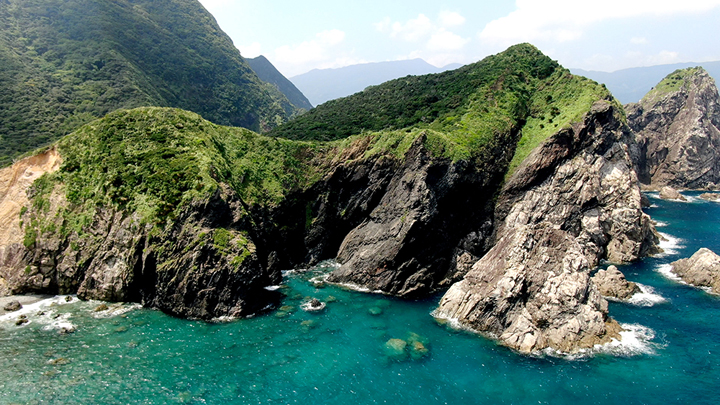 Amami Oshima in Kagoshima Prefecture, the main island in the Amami group of islands, is located almost midway between the city of Kagoshima and Okinawa and is blessed by a beautiful ocean and magnificent nature, including its mangrove forests. It has a population of just over 42,000, covers an area larger than the 23 special wards of Tokyo, and boasts a rugged coastline and mountains surrounded by deep forests. Recognized for its rich biodiversity in flora and fauna, which includes the Amami rabbit, Amami Oshima, together with Iriomote in Okinawa Prefecture and other southwestern islands, looks set to be officially designated as a natural asset on the UNESCO World Heritage list in July 2021. It would be the fifth natural heritage site in Japan. This time I began my photography by traveling south from the city of Amami, which is the largest urban area on Amami Oshima. 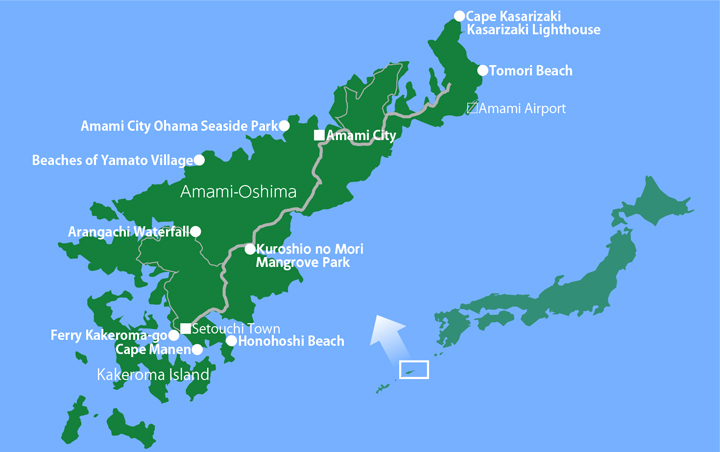 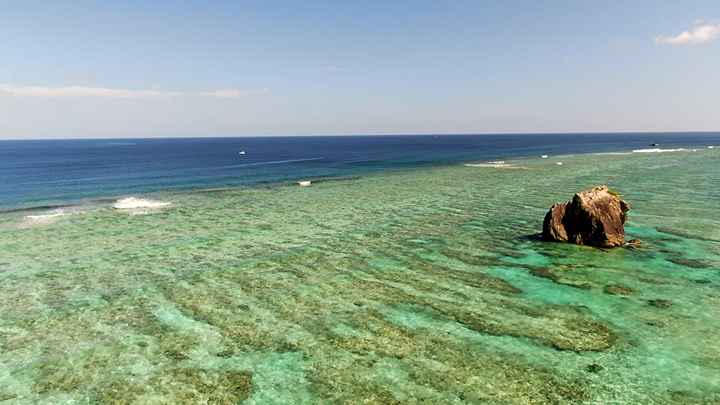 The extensive Ohama Seaside Park is located on the coast about 15 minutes’ drive away from Amami (formerly known as Naze), the largest city on Amami Oshima. The seaside park has various facilities, including the Amami Marine Exhibition Hall and a campsite, and is popular among not only tourists but local folk as well. The cobalt blue ocean is beautiful as well, and the rock protruding alone near the shore is impressive. 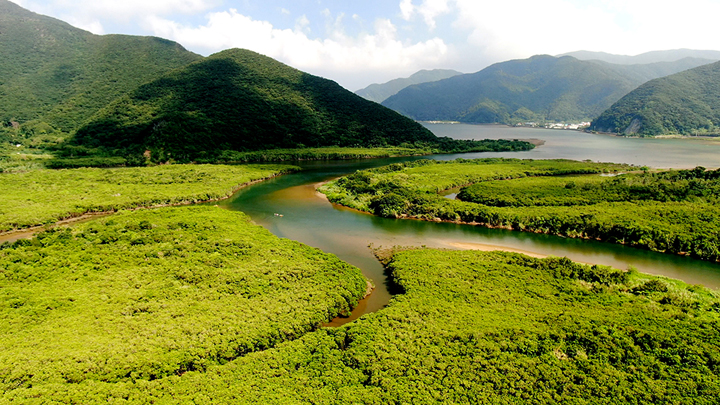 This virgin mangrove forest, which is situated almost in the center of the island facing the Pacific Ocean, is the second largest in Japan after Iriomote. The park, where you can enjoy canoes and kayaks as well, was bustling with sightseers. It has a unique ecosystem and is the habitat of various fish and shellfish, birds, and animals, including the Amami rabbit. 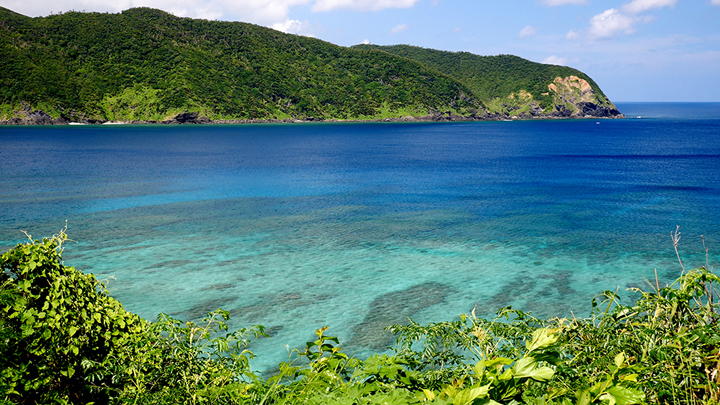 Manenzaki Observatory is located on a highland a few minutes’ drive from the town of Setouchi, which is the second largest urban area on Amami Oshima. Looking across the bay to the south, you can see Kakeroma Island on the other side. The highly transparent deep blue ocean stretching into the distance seems to accentuate the beauty of the island. 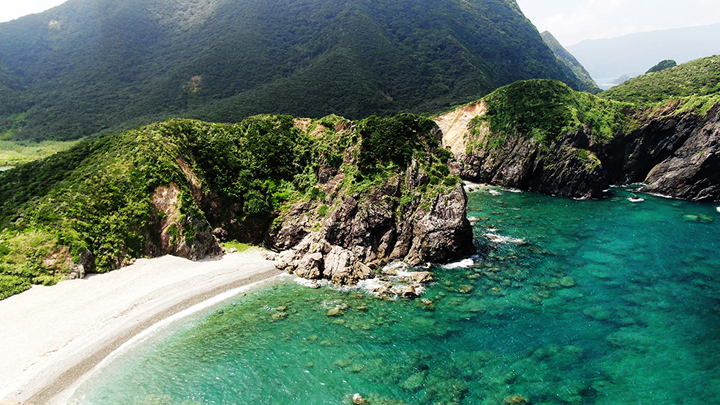 The locals describe Honohoshi Beach as a so-called power spot. The waves crash violently on the steep, oddly shaped rocks, and the beach is covered in pebbles polished by the rough waves. As the waves recede, they chafe the pebbles, creating a famously loud noise. It is said that strange things happen if you take any of these pebbles away with you, so doing so is prohibited. 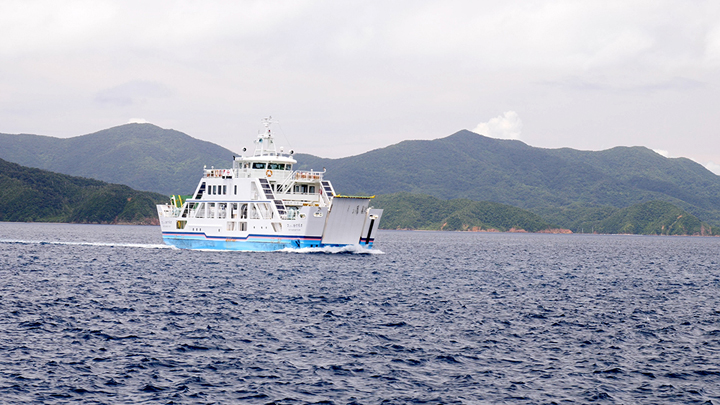 Kakeroma, which is the second largest isle in the Amami Islands, is located to the southwest of Amami Oshima. There are 10 ferries a day operating from Setouchi to the island. I did not go there this time, but locals told me that even among the Amami Islands,
Kakeroma is a unique place with an otherworldly atmosphere. 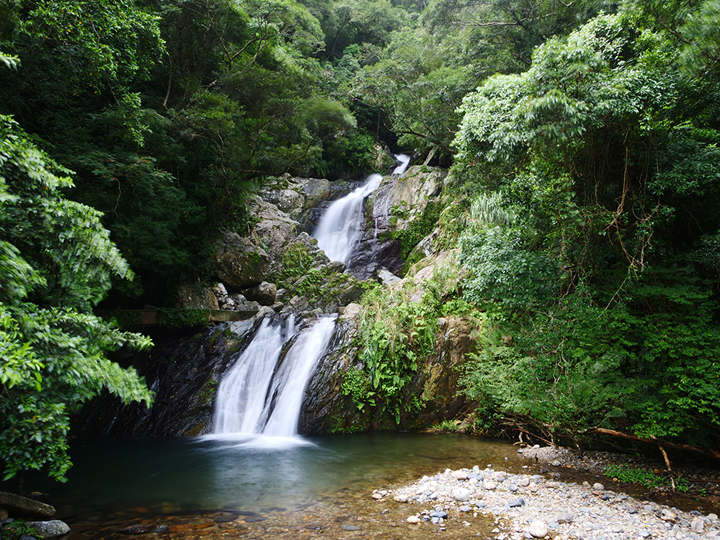 I then headed north from Setouchi. After driving along the prefectural road for a while, a sign appeared on the right. There was a resting place and carpark nearby. A few minutes’ walk from there brought me to a riverbed, from where I could see the Arangachi Waterfall. It is a beautiful two-stage, double-branch waterfall with a drop of 30 meters. Apparently Arangachi is the name of this locality. The spot can be easily reached and is brimming with negative ions. 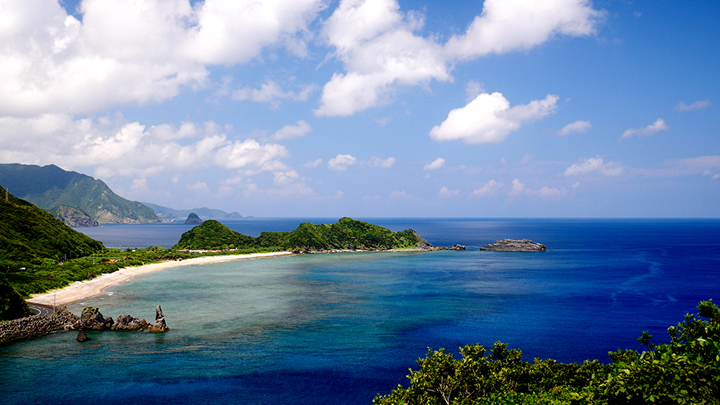 Next, admiring the beautiful coastline to my left as I drove, I came to the northwestern coast of Amami Oshima. The sparkling blue ocean stretched into the distance. There were hamlets here and there, but no large facilities to be seen. The website of Yamato Village describes the scenery as “comfortable and calm.” The village’s shore was just so. 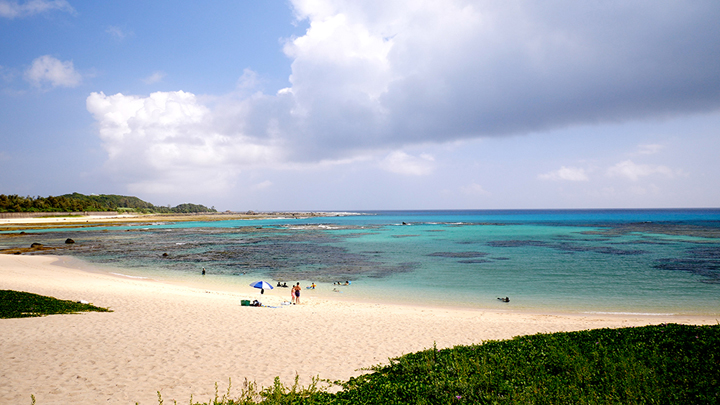 Going further north, beyond the city of Amami, with Amami Airport on my right, I came to Tomori Beach. Beyond the carpark, a beautiful sandy shore appeared. Unlike the other beaches, the sea here is shallow and gentle. It is popular among the locals as well and ideal for sea bathing. 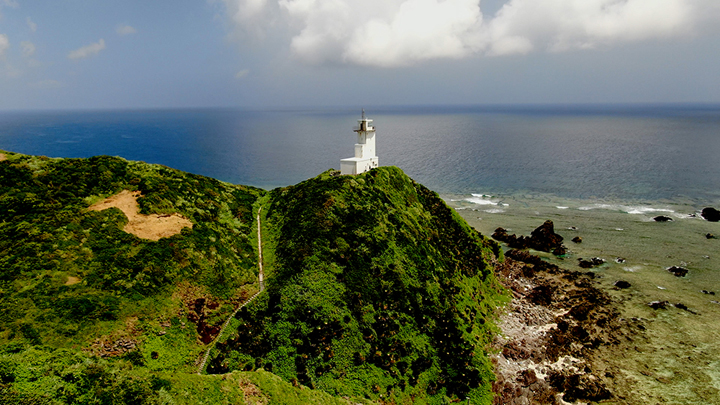 Finally I reached the northernmost point on the island. Kasarizaki Lighthouse on Kasarizaki cape is an important beacon for ships navigating to the north of Amami Oshima or in the Kikai Channel. The lighthouse can be reached by climbing up 50 meters or so of steps. The view from there is fantastic.

Postscript
Amami Oshima is just so vast. In addition, because the coastline is so rugged and the island is surrounded by forests and mountains, the roads have a lot of complicated curves. What this means is that Amami Oshima’s nature is robust and not very receptive to artificiality. If the island becomes listed as a World Heritage site, no doubt it is going to attract even more attention.

Photos and text: Arata Matsumoto, Sharata and Adwise, Inc.
URL: http://www.sharata.net/ (Japanese)
(Sharata supplies 4K videos of outstanding scenery in Japan so that as many people as possible can enjoy it.)