The Hospitality of a Concierge—Reading the Minds of Guests

Tokyo’s Roppongi district boasts the latest art, fashion, and many chic shops and restaurants. It is an excellent location for the Grand Hyatt Tokyo Hotel, a refined and luxurious international hotel favored by many businesspeople and celebrities visiting Japan. The chief concierge there is Ms. Kay Abe, who is also active as a member of the Union Internationale des Concierges d’Hotels “Les Clefs d’Or” (The Society of the Golden Keys), the world organization of hotel concierges. IHCSA Café asked Ms. Abe about her work and aspirations as a hotel concierge. 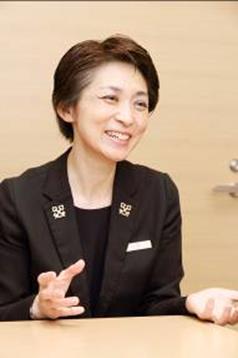 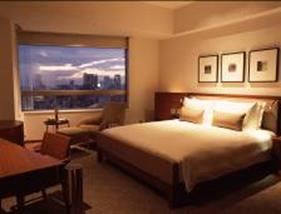 “I hadn’t encountered the fascinating job of reading people’s minds before.”

Café: What gave you the idea of becoming a concierge?
Ms. Abe: When I was a junior high school student, my mother and I accompanied my father on a business trip to Europe. At that time, in the lobbies of the hotels where we stayed, there were dignified men answering inquiries from guests about tourism and business, arranging tickets, and booking tables in restaurants. They were businesslike in their manner, but very elegant as well. In the daytime, when my father had work to do, my mother and I wanted to go sightseeing, so we would consult the concierge beforehand. And the concierge would give us a different schedule every day, assessing my mood and physical condition on that day and taking the weather and other factors into consideration. So one day we would be leisurely going around an art gallery, and another day we would be racing around a zoo. I remember being amazed, because every day he would select places that perfectly fitted our mood at that time.
The concierges whom I encountered at venerable hotels in Europe aroused my interest, because I hadn’t encountered the fascinating job of reading people’s minds before. I think my experience then was the starting point for my career as a concierge.

“It gives me enormous satisfaction when both guests and others involved in the arrangement are happy.”

Café: What kind of things do you take care about in your daily work as a concierge?
Ms. Abe: I get various requests from guests, but I don’t think the duty of a concierge is only to solve difficult problems. The important thing is not simply transmitting basic information and making arrangements but how the information is transmitted. When you make a reservation at a restaurant, for example, first of all you must understand the requirements of the guests, then choose the most suitable restaurant, and then also convey the guests’ requests to the restaurant. By doing so, you can help the guests enjoy their meal even more and have a pleasant time. It gives me enormous satisfaction when both guests and others involved in the arrangement are happy as a result.
A concierge is constantly watching the guests’ mood and wondering what they want and what would please them.

“Concierges first appeared in hotels in Europe around the middle of the nineteenth century.”

Café: Please tell us briefly about the history of the concierge.
Ms. Abe: There are various theories about the origins of the concierge. Some point to the servants who looked after guests at inns in medieval Europe. Others suggest the doorkeepers at aristocratic mansions or the people who went round the rooms at dusk lighting the candles. The origins are uncertain. It is also recorded on the door of La Conciergerie in Paris, where Marie Antoinette [1755–93], the wife of Louis XVI, was confined during the French Revolution, that the people who looked after the residents there were called concierges. [La Conciergerie was used as a royal palace and a prison from the second half of the fourteenth century until the beginning of the twentieth century.]
Concierges first appeared in hotels in Europe around the middle of the nineteenth century. Their job was to greet guests at the entrance of large hotels, the so-called grand hotels, and hand them their room keys. In the twentieth century, concierges gained respect by responding accurately to all kinds of requests from aristocrats and other VIP guests, and the quality of their work, as well as their social standing, improved.

“It is important for concierges to have an active interest in the outside world.”

Café: Are there any differences between concierges in Japan and those in other countries?
Ms. Abe: Their history and authority are completely different. European concierges have a history of more than 100 years, but the job only appeared in Japan around 30 years ago. This huge difference is reflected in the degree of social recognition. In the West concierges are granted a lot of discretion, and their job is wide-ranging. They get invited to the theater, concerts, restaurants, and so on, because businesses want them to know about their products and services. If concierges like the good service and tasty food at a restaurant, they will introduce that restaurant to guests.
In Japanese society, though, unfortunately the role and importance of the concierge are still not recognized very much. So far from extending invitations, businesses actually do not even cooperate with us very much. If concierges had more information about the theater, restaurants, and so on, we could respond even more accurately to the requests of guests.
In today’s Japan, it is important for concierges to have an active interest in the outside world and to establish good relations on a daily basis with a wide range of businesses, such as theaters, restaurants, and flower shops.

“I endeavor to provide the kind of hospitality that makes guests want to return.”

Café: And what are your ambitions for the future?
Ms. Abe: I think the duty of a concierge is to read the guest’s mind and provide hospitality that exceeds the guest’s expectations. You must approach the guest not as your plain self but as a concierge of the hotel. Therefore, it is necessary to have a professional attitude as a hotelman and to constantly play that part.
I endeavor to provide the kind of hospitality that makes guests say they would like to return to the Grand Hyatt Tokyo, the hotel with “that” concierge. And when they really do come back, I feel delighted.
I would also like to establish a Japanese style of concierge, one who integrates the international services of a hotel with the traditional Japanese hospitality provided by the proprietresses of Japanese ryokan. I hope to upgrade quality in that way and appeal that style to the world.

Established in France in 1929, the Union Internationale des Concierges d’Hotels (UICH) is an international network organization of hotel concierges with about 3,500 members in 41 countries. The objectives of the UICH are to improve services to guests and to enable each individual member to develop into an outstanding concierge by drawing together the wisdom and knowledge of members and other activities. The UICH holds an annual world congress and various other meetings around the world, as well as study groups for concierges.

Born in Tokyo. After graduation from Keio University, joined Parco Co. Worked for the planning department of the Early Development Association. In 1992 joined the Yokohama Grand Intercontinental Hotel as a concierge; promoted to head concierge in 1993. In 1997 became an international member of Les Clefs d’Or, the international organization of concierges, and the following year was appointed president of Les Clefs d’Or Japan. Has been chief concierge at the Grand Hyatt Tokyo Hotel since 2002. Publications include Watashi wa konsheruju (I Am a Concierge; Kodansha).