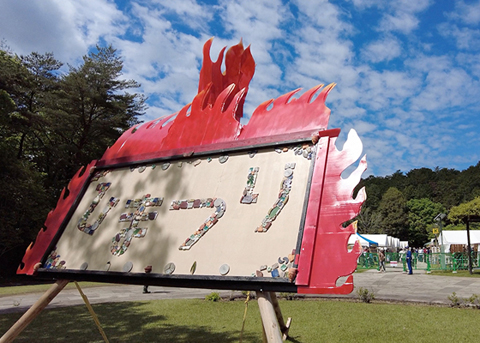 The city of Kasama in Ibaraki Prefecture is the closest pottery-producing area to Tokyo. This time I would like to introduce the attractions of this pottery community, centering on Kasama’s Hi Matsuri pottery festival, which is the most bustling event of the year, as well as ways of enjoying them. The Hi Matsuri pottery festival takes place every year during the so-called Golden Week, a string of national holidays in Japan lasting from April 29 to May 5. Many potters and pottery-making companies with kilns in Kasama display their wares at the festival, which is held in the abundant natural environment of Kasama Geijutsu no Mori Koen (Kasama Art Forest Park). The Ibaraki Ceramic Art Museum and Kasama College of Ceramic Art are also located here. In 2022 more than 200 potters erected tents and participated in the festival, which attracted lots of people from far and near. Young and old, men and women, and families came in search of pottery to their liking, some people even bringing along their pets. 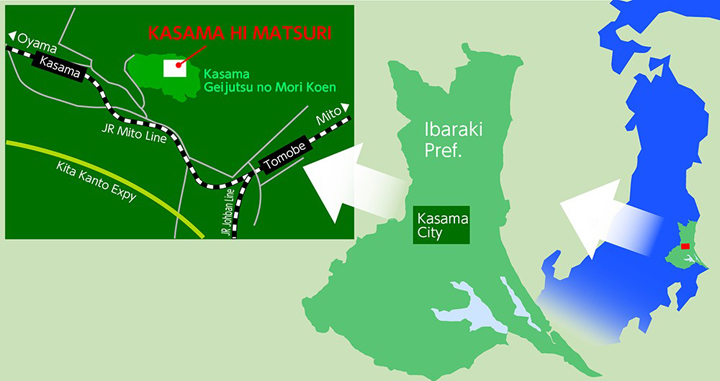 When I visited the Hi Matsuri festival, I was surprised by the wide range of colors, shapes, and designs of the exhibitors’ pottery on display. This rich variety of types makes it tantalizingly difficult to choose what to buy and is exciting even for someone like me, a complete amateur who certainly cannot list pottery as a hobby. As I enjoyed looking around, I began to wonder what Kasama-ware actually was after all, so I visited some potters in search of an answer.
Tofusha (East Wind Gallery) is a pottery maker operated by a family of four—husband, wife, son, and daughter. I had a chat with the wife, Yoko Sudo. Tofusha’s history began in 1973, when her husband, Shigeo Sudo, moved to a district to which the city of Kasama was inviting potters to settle in a bid to promote industry and built a kiln there. He subsequently married Yoko in 1982, and they opened Tofusha. Now called the To no Komichi (Pottery Road), that district has become a well-known spot in Kasama where many potters operate kilns. Raised in such an environment, the Sudo’s children themselves are now engaged in making pottery and pursuing their own ideal works as potters.
When I asked her why they had chosen Kasama, Yoko replied that while the positive efforts of the prefecture and city to entice potters to settle here had played a part, another important factor was the liberal atmosphere of Kasama compared with other pottery-producing regions, which made it easy to move in from outside and engage in pottery making. There are no binding rules that Kasama-ware must be like this or like that, she said. In addition, for someone like Yoko who studied art in Tokyo, the proximity to Japan’s capital was an attraction too.
Visiting Tofusha, I was struck by the fact that the works of the four family members were distinctively individualistic. They all had completely different aims. For example, Yoko, who studied art in the golden age of modern art, is attracted by figurative works, so she is good at making objets d’art and ceramic pictures. Although their goals are different, however, Yoko said that the good point about making pottery as a family is that the parents can advise the children on such things as the properties of glaze and clay.
When I asked about future goals, Yoko replied that although expanding overseas is rather difficult, when Covid-19 subsides, they want to make Kasama-ware known among foreign tourists as well. They are using Creema for e-commerce. Apparently most online customers in Japan are women aged from 30 to around 50; sales to China and Taiwan are also possible. 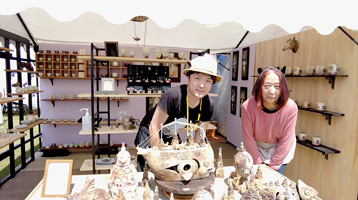 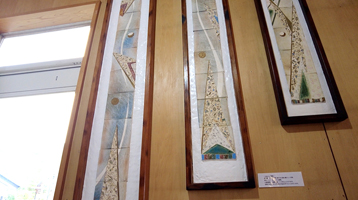 The history of Kasama, where many small-scale artistic potters today compete with one another through their individuality, began in the middle of the Edo period (1603–1868). It is thought to have started in the latter half of the eighteenth century, when a potter specializing in Omi-Shigaraki-ware visited the head of the then village, Kuno Hanemon, and instructed him. Then in the middle of the nineteenth century the Kasama domain, the local government at that time, gave protection to six potters, including the Kuno family.
I visited the Okuda Seitosho (Okuda Pottery Workshop) and had a chat with Tatsuo Okuda, the third-generation owner of one of those six potteries that was taken over by his grandfather. Despite the fact that it was a surprise visit, Tatsuo responded with much courtesy and showed me the historic thatched gallery and the splendid climbing kiln, which his father had built 50 years ago and Tatsuo himself had renovated.
The climbing kiln comprises four chambers, with the temperature dropping, as the kiln rises, by 200 degrees Celsius in each chamber from a maximum of 1,350 degrees. Although it is possible to bake about 2,000 pieces of pottery of differing sizes, from small to large, in this kiln simultaneously, in recent years Tatsuo has concentrated not on mass production but on making small-lot works capitalizing on the special characteristics of the climbing kiln. The pieces baked in the climbing kiln that he showed me had an indescribable flavor of natural colors and patterns generated only by the kiln’s heat and red pine firewood ash; no glaze had been used at all. Presumptuously, I imagined these works to be the “dishware with the earth’s flavor” that Tatsuo places so much importance on.
In recent years the city of Kasama has been promoting a project to foster young potters, and the Okuda Seitosho cooperates by lending its studio and gallery to the city for practice by graduates of the Kasama College of Ceramic Art. When I asked whether he gives instruction to these young potters, Tatsuo replied, “I give instruction on kiln baking, but I don’t say anything about their works. That’s up to the individual.” Once again, I sensed the open atmosphere of Kasama, which does not try and paint things in one color. 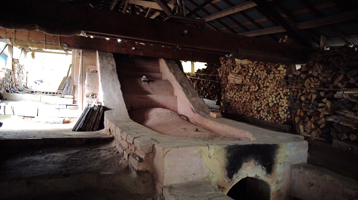 The climbing kiln at Okuda Seitosho 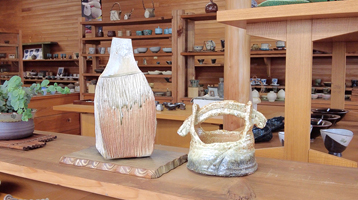 Video of the gallery and climbing kiln: https://youtu.be/oMPfLRN6nYc

Hara Tokobo (Hara Pottery Studio)
Sumio Hara of Hara Tokobo, which, like Tofusha, has a studio on the To no Komichi pottery road, hails from Kanagawa Prefecture. He began training at the Ibaraki Prefecture Pottery Training Center (now the Kasama College of Ceramic Art) in 1972 and then in 1975 opened a kiln together with his wife Kyoko, who had studied at the same center.
Hara Tokobo makes mainly everyday items like dishes, cups, and bowls. As a feature of this studio, many vessels are made by applying white slip on Kasama clay and working on that, although apparently sometimes the best method of expression is to produce clay that is suited to adding pictures and other craftsmanship by mixing other clay as well.
When I asked about current themes, Sumio replied that this year they have experimented in adding natural patterns by not only applying white slip but also pouring it on the vessel’s surface and in making a glaze using iron-rich Hakoda stone from the Hakoda district of Kasama (the yellowish mug and pot in the video).
I also asked about ways of enjoying Kasama besides the Hi Matsuri pottery festival, and Sumio told me about such events as the Irodori Hatsugama Ichi, a pottery market held annually at New Year’s; the Kasama Roman trade fair with on-the-spot sales for local industries and agricultural produce held in October; and the pottery-centered To to Kurashi (Pottery and Living) craft fair, which is held around the time of the Culture Day national holiday in November.
Like the Hi Matsuri, these events all take place in the Art Forest Park. This park is a pleasant place for just taking a stroll. It has abundant nature and facilities like the Ibaraki Ceramic Art Museum and shops. “Oh yes,2 Sumio added, as if suddenly remembering, “Kasama also produces Hitachi Aki Soba. The soba here is really good!” 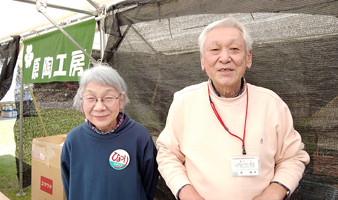 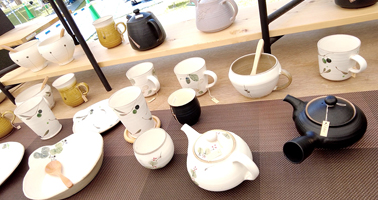 Yamasaki Toen (Yamasaki Pottery Garden)
The next place that I visited was the exhibit booth of Masahiro Yamasaki of Yamasaki Toen, which is also situated on the To no Komichi pottery road. Masahiro comes from Yokohama. Quitting his job as a salaried employee, he opened the kiln in 1978 together with his father Toshio, who had been training in Kasama before then.
Among the potters that I visited on this trip, Yamasaki Toen is the only one that uses only Kasama clay. Masahiro explained that they focus not on mixing clay but on the technique of changing the pottery’s color by changing the baking method. Aware that Kasama is a chestnut producing region, they often use natural chestnut tree bark ash in the glaze.
Because it is rich in iron, Kasama clay comes out a reddish-brown color when baked. However, when the method of reduction firing is used (that is, firing in a state of oxygen deficit), the color turns blackish. And conversely, when the method of oxidation firing is used (that is, firing in a state of oxygen excess, with fuel completely burned), the color becomes a whitish-brown. While giving this explanation, Masahiro showed me two vessels baked by the two different methods for comparison. He also noted that he had experimented for the first time in baking a single vessel using both the oxidation and reduction techniques. 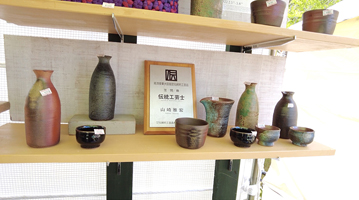 A plaque from the minister of economy, trade, and industry indicating designation as a master potter 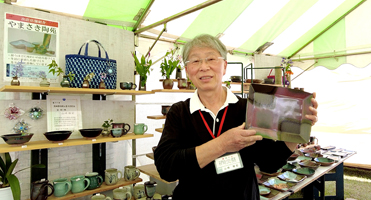 Keicondo
Among the more than 200 exhibitors at the Hi Matsuri pottery festival, the works of Keicondo appeared quite different from others on display and had a great impact on me.
Kei was born in Kasama. Because his father was a potter, he told me, he came into contact with pottery from an early age and, as he grew up, took the joy of making pottery almost as a matter of course. After graduating from the Ibaraki Pottery Training Center, Kei took part in the youth overseas volunteer program of the Japan International Cooperation Agency (JICA), under which he spent two years teaching pottery in Bolivia in South America. After returning to Japan, he opened a studio in Kasama in 2010.
Kei’s works have a simple design but big impact. When I asked about the concept behind them, he replied immediately, “Making simple vessels that bring out the best in food. It’s always the same.” Kei said that he looked at various pottery to find aspects that he himself likes.
Since Kei hails from Kasama, I asked him to recommend attractions other than the
Hi Matsuri festival. Coincidentally, or perhaps only naturally, like Sumio Hara he mentioned the soba straightaway. “Like most potters in Kasama,” he said, “many owners of soba restaurants moved here from the Tokyo region. And like the potters,” he added with a laugh, “many of them are rather eccentric characters!” Hearing that, I thought that next time I visited Kasama, I would go to an eccentric soba restaurant that serves soba in Kasama-ware bowls. 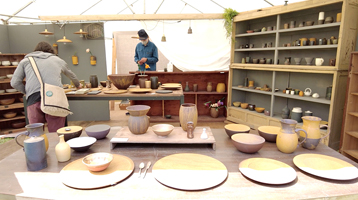 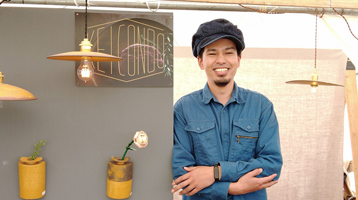 Keicondo aims to make simple vessels that bring out the best in food.

Both back in the Edo period and today the administration of Kasama supports pottery making as a local industry. The word “administration” tends to conjure up a stiff image, but Kasama seems to have an atmosphere in which potters with their own ideals and values can freely pursue their own goals without being bound by local tradition. As well as the fact that Kasama has ideal clay for pottery making, I felt that this atmosphere has been a very important factor in Kasama’s development as a pottery community.