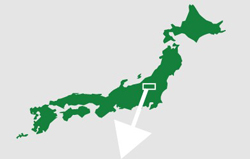 A local railway line stretching around 135 km from Aizu-Wakamatsu Station in the city of Aizu-Wakamatsu in Fukushima Prefecture to Koide Station in the city of Uonuma in Niigata Prefecture is becoming very popular. Many people, Japanese and foreign alike, visit the area to view the railway scenery. As you can see from the attached photos and videos, the reason lies in the line’s spectacular off-the-beaten-track scenery: the refreshing lush greenery of spring, the vivid hues of autumn, and, perhaps even more so, the snowy winter scenes. In 2003 the Tadami Line was voted top of the best 10 local lines in Japan with the prettiest snowy scenery. And the No. 1 Tadami River Bridge along the line in particular is constantly ranked as one of the best three bridges in Japan. Weibo, China’s largest social network service, apparently introduces the Tadami Line as the “most romantic railway in the world.” The Tadami Line initially opened in 1942, and the full stretch began operating in 1971. At a time when local lines are closing down across the country, the Tadami Line has survived thanks to the strong determination of the related prefectural and municipal governments. I paid a visit to this out-of-the-way railway at the beginning of March, just as winter was coming to an end in the region. 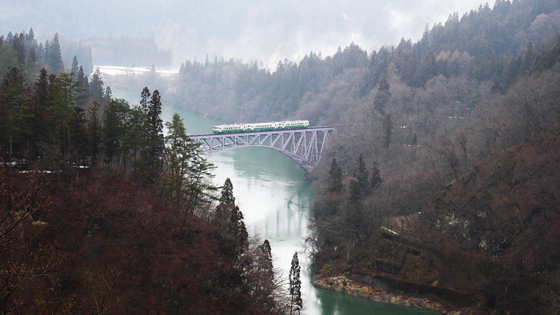 A three-carriage train on the Tadami Line crossing the No. 1 Tadami River Bridge
Video: https://youtu.be/VtOI3vB_xcQ

Armed with my camera, the first place that I made for was the viewpoint overlooking the No. 1 Tadami River Bridge. The bridge can be seen across a deep gorge. Coupled with the surrounding scenery, it is a magnificent sight. According to a local photographer standing nearby with his camera, “It’s been a warm winter. This year the snow has melted more than three weeks earlier than usual.” I, of course, had been hoping for a little snowy scenery, but this year almost all of the snow had disappeared. Still, the splendid scenery of the environs and the local line trains were much more than enough.
There are only six roundtrips a day on the Tadami Line, and daytime photo opportunities from the viewpoint are limited to three up-trains and three down-trains. Two trains each pass over the bridge during the early morning 7 am and 9 am periods, so train spotters have to be on their toes. If you want to take a photo of the trains, you have to keep a constant eye on your watch and the timetable. The chance is here and gone in an instant. The up-train leaving Aizu-Nishikata Station, the one just before the No. 1 Bridge, at 13:03 crossed the bridge a couple of minutes later. Surrounded by dominating mountains, the three-carriage train looked just like a toy. It was much slower than I had expected, and it crossed the bridge with a noisy clanking sound. For a moment, the whole scenery seemed to move.

There are several places from where the beautiful Tadami Line can be photographed, as well apparently as some secret spots that only the locals know about. The viewpoint overlooking the No. 1 Bridge is situated by the Oze Kaido Mishima Juku roadside station between Aizu-Hinohara and Aizu-Nishikata Stations on National Highway No. 252. From the car park, you follow a well-kept path and then, climbing a well-maintained mountain trail for a little way, come to the three viewing points. Many photographers, either with tripods set up or cameras in hand, were waiting here for the train to pass. According to one local photographer, “Many foreigners come here to photograph the Tadami Line. A lot of them are from Taiwan.” Though it was difficult to tell from their looks that they were foreign, quite often the conversation that I could hear around me was certainly not Japanese. I could only take my hat off to these energetic and well-informed foreigners who had come so far to see this spot deep in the mountains. 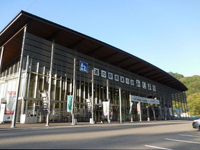 Rolling Stock of the Tadami Line and Scars of the Earthquake​​​​

The Tadami Line is used by about 300 people a day. The carriages are KiHa 40 series diesel units manufactured around 1980. One of the train’s carriages carries a wrapping advertisement for the Tadami Biosphere Reserve (or Tadami UNESCO Eco-Park as it is known in Japan) designated by the United Nations Educational, Scientific, and Cultural Organization. There are nine UNESCO-designated biosphere reserves in Japan; Tadami was listed in 2014. 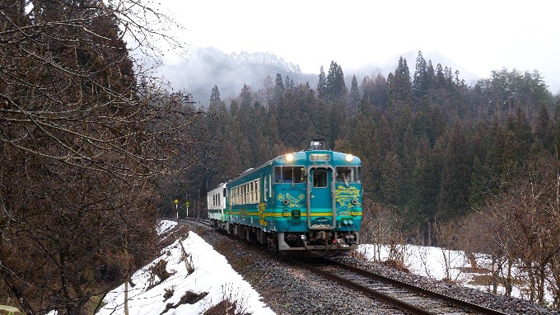 The Tadami Line, which runs along two rivers (Tadami River on the Aizu-Wakamatsu side and Aburuma River on the Koide side in Niigata Prefecture) suffered enormous damage in the Great East Japan Earthquake of March 2011 and then the torrential rain in Niigata and Fukushima Prefectures in July of that year, including the collapse of bridges and landslides damaging the tracks. The section between Aizu-Kawaguchi Station and Tadami Station, where damage was especially severe, is still closed as of April 2019, with passengers required to change to a bus for this part of the journey. My photography this time focused on the section between Aizu-Hinohara and Aizu-Nakagawa, where the blend with the secluded Tadami River is especially picturesque. 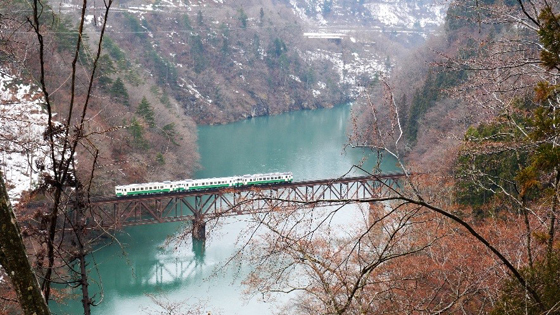 Awakening to a Snowy World​​ 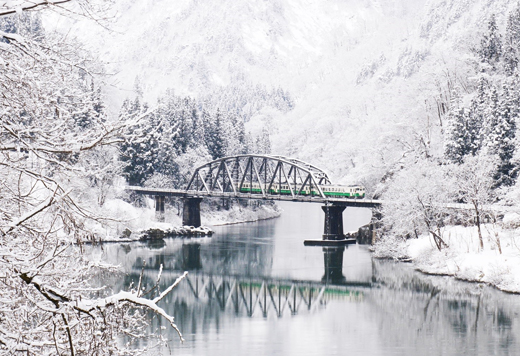 A three-carriage train on the Tadami Line crossing No. 4 Bridge Video:  https://youtu.be/k-_70dhn1-E

The next morning, when I peered out of the window just before dawn, I was greeted by a world mantled in snow. The previous day I had only been able to see leftover snow here and there, but today, luckily, it was a completely white scene. Apparently it was the first time that snow had settled in this area for quite a while. No doubt the Tadami Line was a whole new world as well. I headed for a good photo spot recommended to me on the previous day by a local photographer. It was a magnificent world of white. The green contour of the three-carriage train contrasted with the monotone setting as it slowly crossed the bridge. An unbelievably and indescribably beautiful and romantic world! I could well understand why people from overseas are attracted to this out-of-the-way place. 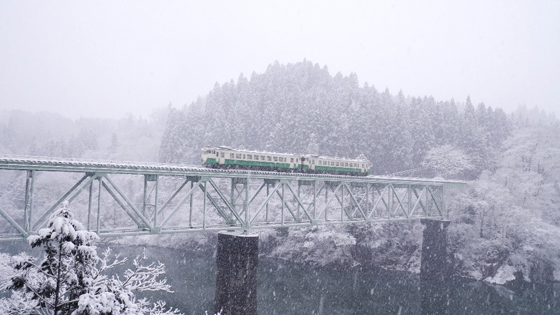 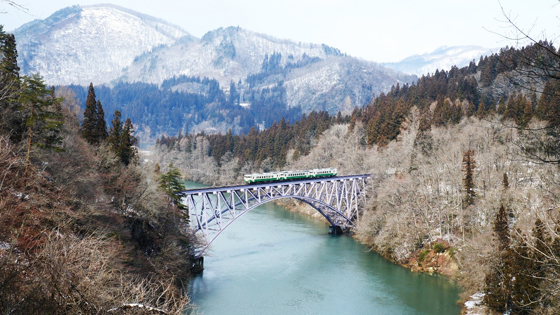 Almost all of the 20 stations along the currently operating 60 km of the Tadami Line are unmanned. Seeing the trains leisurely winding their way through the mountains definitely is relaxing in a way. Perhaps this is quintessential Japanese scenery. The Tadami Line and National Highway No. 252 run alongside Tadami River. You can enjoy the train journey, or you can go around the viewpoints by car. If you do go by car, though, please be extra careful because, needless to say, you will be coming into contact with local people going about their daily life. Wherever they go, sightseers should exercise prudence. 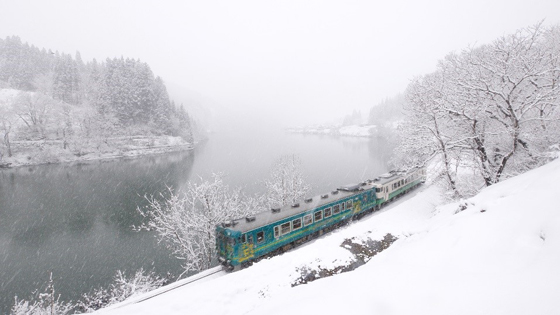 An ad-wrapped carriage of a train passing between Kaneyama Fureai Square and Tadami River. Colored bluish-green in an image of Tadami River, the carriage also serves to publicize the Tadami UNESCO Eco-Park by showing pictures of the area’s flora and fauna. Video:   https://youtu.be/5hoPUUWJET0

The Tadami Line and its environs can be enjoyed throughout the year. There are also numerous famous and secret hot springs in the vicinity. Combining the out-of-the-way local railway line and a secret hot spring is sure to double the pleasure of a visit. This time I stayed at the Yanaizu Onsen, which can be described as an entrance to the Tadami Line. The experience enabled me to come into contact with the friendly service and kindness of the local people. Surrounded by such regional attractions, the out-of-the-way local railway is attracting many sightseers. The restoration of the whole line in fiscal 2021 is something to look forward to. It will then be possible to view the magnificent hidden scenery of Aburuma River beyond Aizu-Nakagawa Station.