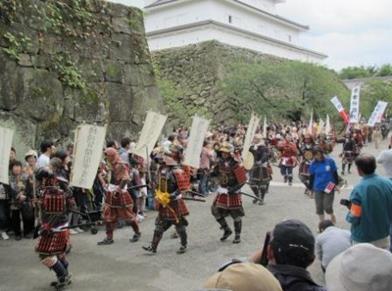 Aizu Wakamatsu is an atmospheric castle town surrounded by the magnificent nature of Mount Bandai and Lake Inawashiro and retaining vestiges of the Aizu clan.
The original model of Aizu Wakamatsu was built by Gamo Ujisato (1556-95), a prominent warlord who served Oda Nobunaga and Toyotomi Hideyoshi. The traditional industries representing Aizu that Ujisato developed by summoning merchants and craftsmen from Omi Province (present-day Hino-cho in Shiga Prefecture), such as lacquer ware and sake brewing, are still thriving around the city even now.
On the day of the annual Aizu Clan Samurai Parade, in which around 500 people dress up as samurai and parade through the city, we set our minds in historical mode and took a nostalgic stroll around Aizu Wakamatsu to enjoy the townscape of imposing warehouses built in the Edo period (1603-1868) and stylish Western-style buildings of the Taisho era (1912-26).

Aizu Wakamatsu is a castle town centered on Tsuruga Castle, famous as an impregnable fortress that withstood bombardment by pro-imperial forces at the time of the Boshin Civil War (1868-69). In the past and even today, Tsuruga Castle is a source of pride and psychological support for the people of Aizu.
In May of this year retiling work was completed, and all of the buildings in the castle grounds were given a uniform late-Edo look. The new contrast between the sparkling white walls and red tiles is splendid, and among the extant donjon in Japan, Tsuruga Castle’s tower is the only one in the country with red tiles.
Inside the donjon there is an exhibition of armor, swords, and other items, and the history and culture of Aizu, including the successive Aizu clan daimyo and the Boshin Civil War, are introduced in an easy-to-understand manner. On the third floor visitors can put on a kimono for a commemorative photo. This attraction is popular among foreign tourists as well.
In the castle grounds there is the Rinkaku teahouse, said to have been built by Sen no Shoan (1546-1614), son of Japan’s grandest tea ceremony master Sen no Rikyu (1522-91), as a token of gratitude to Ujisato. Visitors to the castle are recommended to visit this graceful structure.
About 15 minutes’ walk to the east of Tsuruga Castle is the Oyakuen landscape garden, built as a villa of the Aizu Matsudaira clan and designated as a national scenic spot. The cultivation of medicinal herbs, which began in the Edo period, still takes place here today, and about 400 types are planted, including ginseng. At the garden’s teahouse, called the Ochayagoten, visitors can enjoy a truly blissful moment enjoying the taste of powdered green tea while viewing the surrounding scenery. 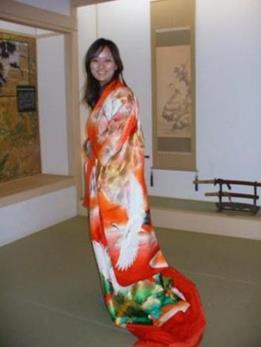 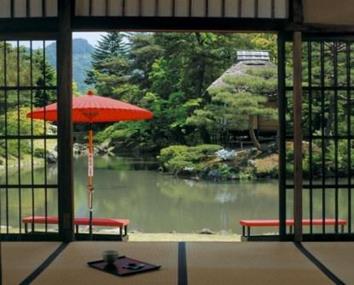 Nanuka-machi Street: The Spirit of Merchants and Craftsmen Lives On

The area along Nanuka-machi Street flourished because this was one of the main thoroughfares in Aizu and because the economic policy of “free markets and open guilds,” which abolished the monopolistic privileges of guild-like trade associations, was adopted here. Even today the street is lined with historical warehouses and retro Western-style buildings.
Shops dating from the Edo period and specializing in Aizu lacquer ware and Aizu painted candles still exist. They also offer visitors the opportunity to try their hand at painting pictures, so while coming into contact with Aizu’s traditional crafts, you can make an original souvenir as well—the only one of its kind in the world!
Shibukawa Tonya, near Nanuka-machi Station, prospered as a marine product wholesale store in the Meiji, Taisho, and Showa periods. Today the Taisho-era wooden building and Meiji-era warehouse serve local Aizu cuisine, such as kozuyu (a soup of taro, carrots, jew’s ear, and other ingredients cooked in dried shellfish adductor muscle stock and lightly seasoned with soy sauce), as well as herring, and dried cod. The succulent Aizu Shiokawa beef is simply superb too. Visitors are recommended to get a taste of Aizu’s history through its cuisine. 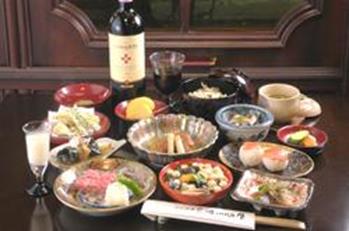 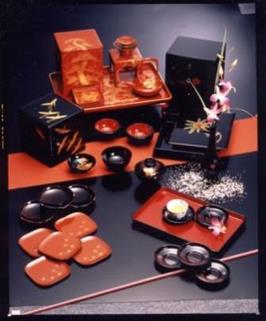 A Learned City with Many Attractive Cafés

The famous bacteriologist Hideyo Noguchi (1876-1927) became attracted by the wonders of medicine after undergoing surgery to treat a burn on his hand. Later, as a student, he studied medicine by living in at the Kaiyo Clinic in Aizu Wakamatsu. Today the second floor of this building displays materials relating to Noguchi, and many young people aspiring to follow the path of medicine visit the museum. The first floor, meanwhile, is occupied by an antique café called Aizu Ichibankan, which was once visited by Crown Prince Naruhito and Crown Princess Masako. So while contemplating Noguchi’s life, visitors can enjoy a cup of coffee here just as the imperial couple did.
There are also cafés constructed in warehouse buildings and red-brick retro cafés dotted around the city, so visitors will have no problem finding a nice place to have a coffee break during their stroll. 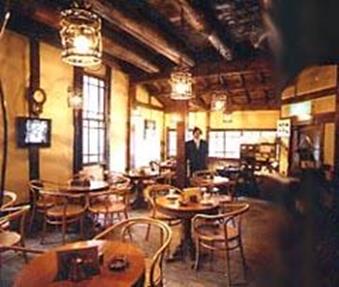 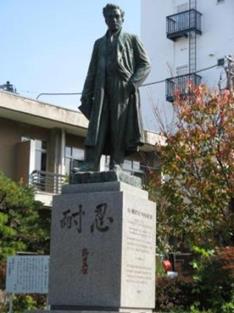 The gravesite of the Aizu Matsudaira clan of the Aizu domain, which was designated as a national historic site in 1987, is situated on Mount Innai, to the east of the entrance to Higashiyama Onsen hot spring. Local people call it the “Innai Mausoleum.”
The entrance at the foot of the mountain is somewhat awesome, rather like a checkpoint. There is a place for washing your hands as an act of purification, giving visitors the feeling that they are about to enter a sacred place. As you climb up the densely wooded mountain path, you begin to feel a certain power in the air.
After walking for about 15 minutes, just as you are beginning to get out of breath, you come to a long and narrow open space with large stone monuments ahead of you. These monuments are built on top of large stone tortoises and are inscribed with epitaphs of Aizu clan daimyo, giving their names, achievements, histories, and other information.
The large tortoise is an imaginary animal of Chinese legend called the black tortoise that protects the spirits of the dead. In Japanese it is known as genbu. Since the black tortoise is a deity defending the northern direction, its face is always facing north. The first Aizu Matsudaira clan lord, Hoshina Masayuki (1611-72), is not buried here but at Hanitsu Shrine in Inawashiro, which lies to the north.
The genbu has piercing eyes, sharp fangs, and claws, and pointed ears. Viewed from the side, it looks ready to pounce at anytime. But seen from above, it looks as though it is prostrating itself before the lord asleep in the grave and worshipping him.
Behind and above the monument of each grave there are two stone lanterns, and behind and above them there is the omoteishi, a kind of stone marker bearing the rank, status, and so forth of the lord. Beyond the omoteishi, on top of a round burial mound, there is an octagonal shizumeishi gravestone for the repose of the daimyo’s soul.
Although the grave of the second daimyo is Buddhist style, those of the third to ninth daimyo are Shinto style. Other family members and descendants are also buried here.
Visitors to the gravesite were heard to say that they felt soothed or empowered by the experience. Borrowing a phrase that has become popular recently, perhaps we can truly describe this place as a tourist “power spot.” 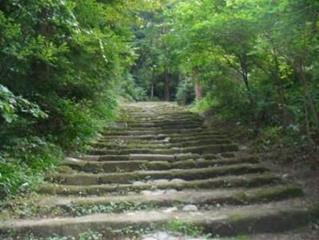 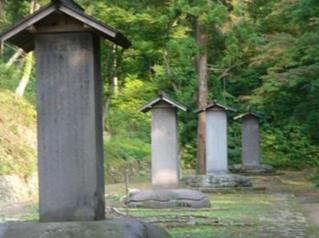 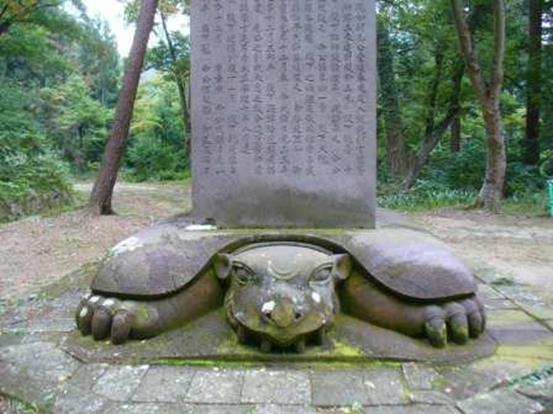 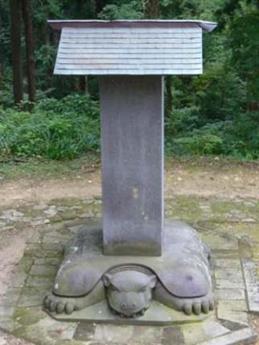 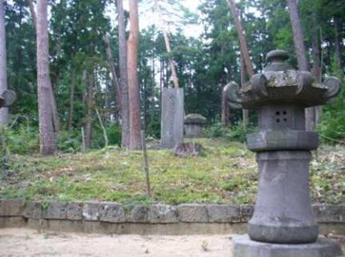